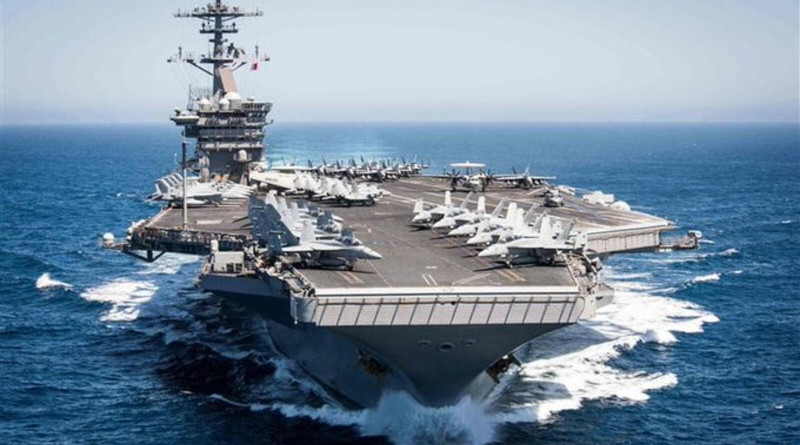 China is reportedly sending its two new aircraft carriers into war games near the Pratas Islands, playing into fears that a Taiwan invasion could be next as tensions with the US continue to worsen.

The aircraft carriers Liaoning and Shandong are currently in Bohai Bay in the Yellow Sea on a combat readiness mission, before the massive ships head into the war games. The move comes after Chinese Premier Li Keqiang expressed Beijing’s desire to ‘reunify’ with self-ruled Taiwan, in an apparent policy shift.

The aircraft carrier deployment also follows a US decision to impose sanctions on 33 Chinese companies for helping Beijing spy on its minority Uighur population and possibly because of ties to weapons of mass destruction and China’s military as well.

US-China relations have been growing increasingly tense as both dispute the origins of Coronavirus.

Chinese foreign minister Wang Yi warned on Friday that the sanctions would risk ‘a new Cold War’, as tensions between both countries have escalated over the Coronavirus outbreak, the Sun reports.

The Trump administration has increasingly blamed China for its handling of the outbreak, while Beijing has accused some in Washington of engaging in propaganda.

‘It has come to our attention that some political forces in the US are taking China-US relations hostage and pushing our two countries to the brink of a new Cold War’ Yi said.

A report released last week by the Council on Foreign Relations, a political think tank, sees possible military conflict between the US and China in the South China Sea likely in the next 18 months if, ‘their relationship continues to deteriorate as a result of ongoing trade frictions and recriminations over the novel Coronavirus pandemic.’

Taiwan, meanwhile, has complained of increased Chinese military harassment since the Coronavirus pandemic began, with fighter jets and naval vessels regularly approaching the island on drills that China has described as ‘routine.’

The news comes after Taipei’s independence-leaning President Tsai Ing-wen swore in for her second term this week, and US Secretary of State Mike Pompeo congratulated her for the re-election, in a move that infuriated the Chinese Communist Party.

China says Taiwan is its most sensitive and important territorial issue, and has never renounced the use of force to bring what it views as a Chinese province under its control, making the Taiwan Strait a potential military flashpoint.

Li, in his state-of-the-nation work report at the start of the annual meeting of China’s parliament, said his country would ‘resolutely oppose and deter any separatist activities seeking Taiwan’s independence.’

China will improve policies and measures to encourage exchanges and cooperation across the Taiwan Strait, and protect the well-being of Taiwan’s people, he added.

‘We will encourage them to join us in opposing Taiwan’s independence and promoting China’s reunification,’ Li said. ‘With these efforts, we can surely create a beautiful future for the rejuvenation of the Chinese nation.’

However, there was no mention of the word ‘peaceful’ in front of ‘reunification,’ departing from the standard expression Chinese leaders have used for at least four decades when addressing parliament and mentioning Taiwan.

Democratic Taiwan has shown no interest in being ruled by autocratic China.

A senior Taiwan official, however, told Reuters the absence of the word ‘peaceful’ did not signal a fundamental change in China’s approach towards the island.