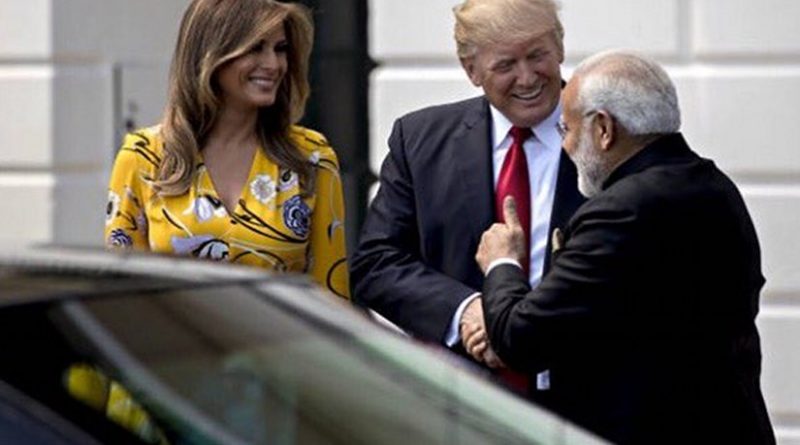 As PM Narendra Modi meets US President Donald Trump, expectations may be low but the hype is not. Modi is a charismatic leader and his charisma has allowed him to score points whenever he travels abroad. There is a sense in some quarters that he will be able to pull it off once again with Trump. Modi himself has suggested that he looked forward to the opportunity of having an in-depth exchange of views. “My USA visit is aimed at deepening ties between our nations.

Strong India-USA ties benefit our nations & the world,” he had tweeted before his visit. This will be Modi’s fifth state visit to the US but the first under the Trump Presidency which makes it far from a straightforward affair. For its part, the Trump Administration has sent signals that they will warmly welcome the Indian PM with Trump leading the way.

Describing  Modi as “a true friend”, Trump has tweeted “Look forward to welcoming India’s PM Modi to @WhiteHouse on Monday. Important strategic issues to discuss with a true friend!” He will be hosting Modi for a “working dinner”, the first for a foreign leader in his five-month term. The appointment of Kenneth Juster as US Ambassador to India is being seen as a good move for bilateral ties. He knows India well and has worked on a range of India-related initiatives in the past. The US State Department has made it clear it expects Modi’s “visit will strengthen ties between the US and India and advance our common interest in fighting terrorism, promoting economic growth and prosperity, and expanding security cooperation in the Indo-Pacific region.”

In line with this sentiment, the US has approved the sale 22 Guardian unmanned surveillance planes, worth $2-3 billion, on the request of the Indian Navy which requires these drones for intelligence and reconnaissance purposes. With this, India has become the first country outside NATO to operate them. The US has also announced its decision to help India’s power grid by providing $7.5 million to ensure access to affordable and reliable energy. Lockheed Martin and Tata have signed a pact to make F-16 fighter planes in India. All these are signalling mechanisms to showcase the continuing strength of Indo-US ties.

But Indian concerns are many and not likely to get resolved easily. Modi will be raising Indian concerns which include the US decision to pull out of the Paris climate accord and review the H1B visa program, under which thousands of skilled Indians go to the US. The Indian disapora, a key constituency of Modi, is hoping he would raise with Trump concerns over the H1B visas, widely used by Indian tech companies to send IT professionals to the US. Trump’s executive order in April calls for tightening the rules of the H-1B visa programme to stop “visa abuses” and he remains committed to enforcing his ‘Hire American’ rules which he is hoping will protect jobs of US workers.

To underscore the salience of economic and trade ties for bilateral relations, Modi will be meeting top US corporate honchos including Amazon CEO Jeff Bezos and Apple CEO Tim Cook. A number of CEOs of Indian-origin, including Microsoft’s Satya Nadella, Adobe’s Shantanu Narayen, Google’s Sundar Pichai, and Deloitte’s Punit Renjen will also be part of this outreach. Modi will be making a case that India’s economic success is also beneficial to America’s economic future.

On issues like terror and Islamist extremism, Modi and Trump have converging views. On Pakistan, the US is in favour of tightening the screws and Modi’s hard-line vis-a-vis Pakistan suits that perspective. Regional security is another area where the two nations will find much to agree on. The two will also make an attempt to revive the civil nuclear pact which has seen little movement in recent months. But it is clear that New Delhi has decided not to overdo Modi’s outreach in the US. Compared to his earlier Madison Square Garden gig, he will be hosting a relatively low-key community event for around 1,500 people.

Modi’s visit is being closely watched both at home and abroad. At home, there is curiosity to see what kind of chemistry he is able engender with Trump and whether the past momentum in the relationship can be sustained. Abroad, American allies and adversaries, who are still struggling with the Trump phenomenon, will be trying to discern some larger trends regarding American foreign policy. China, in particular, has shown some concerns about this visit already.

Responding to a question about India-US cooperation in the Indo-Pacific region in view of the Modi-Trump meet, the Chinese foreign ministry has already warned India and the US not to disturb “peace and stability in the South China Sea.” The Chinese spokesperson said, “With concerted efforts of China and ASEAN countries the situation there is cooling down. We hope other countries especially non-regional countries can respect the efforts by the regional countries to maintain peace and stability in the South China Sea and can play a constructive role in this regard.” Trump’s inconsistency has rattled Beijing and if Modi steers the Indo-US ties back to its earlier trajectory, China will certainly be uncomfortable. Deepening defence ties between India and the US as underscored by the drone deal will further exacerbate Chinese concerns.

Obama had declared India-US ties the “most defining partnership” of the 21st century. In his own way, Trump has been equally effusive about the future of this bilateral partnership. But given the domestic turbulence he faces and his crowded foreign policy agenda, Modi will need to ensure that India is on Trump’s radar for the foreseeable future. Otherwise, it won’t take long for the two bureaucracies to take the sheen off this partnership. And this won’t be good news for Modi’s domestic and foreign policy agenda.

Home » India-US Ties In The Age Of Trump – OpEd