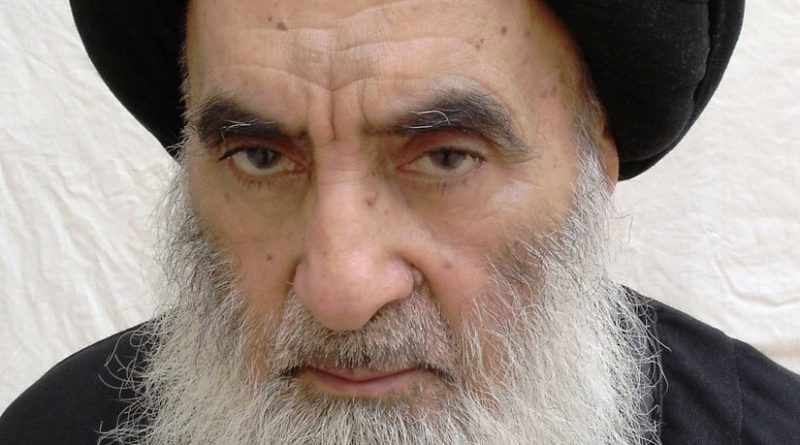 Iraq, one year after Haider Al Abadi took over the premiership and one year since the U.S. commenced airstrikes against ISIL or ISIS – Islamic State in Iraq and Levant, previously known as Al Qaida in Iraq AIQ – is grappling with not merely an increasingly menacing existential threat posed by ISIL, but even more alarmingly an intensifying wave of protests that erupted in Basra – which is Iraq’s major port and above all where the overwhelming majority of Iraq’s oil exports stems from – and swiftly swept through southern provinces, eventually reaching the capital Baghdad.

Although the demonstrations were initially sparked by a brutal heat wave which has been exacerbated by an indefensible chronic shortage in electricity supply and almost nonexistent public services, however, they have dramatically expanded, forcefully calling for an all-out war on corruption and swift political reform. These protests have undoubtedly sent shock waves right across the Shia political blocs, largely because they are severely undermining their credibility and legitimacy at the heart of their Shia powerbase.

The three biggest shia political blocs that have persistently been at the heart of all Shia-led governments, since the U.S.-led invasion in 2003, are the following: the State of the Law (SoL) – that has consistently been led by the dawa party, from which comes not only the incumbent PM Abadi, but also the previous two: Nouri Al Maliki and Ibrahim Al Jaafari – Islamic Supreme Council (ISC) led by Ammar Al Hakim and the Al-Ahrar bloc led by Moqtada Al Sadr.

Against this backdrop, it is hardly surprising to see the top Shia cleric (Marja), Grand Ayatollah Ali Al Sistani, swiftly scrambling to forestall these currently peaceful, yet perilously tense demonstrations from sliding inexorably into an all-out Shia vs. Shia confrontations, which would have highly disastrous implications for the ongoing war against ISIL. After all, it was undeniably the Shia paramilitaries and thousands of Shia volunteers, who enthusiastically answered Grand Ayatollah Al Sistani’s call, in June 2014, to take up arms, thereby forming the Popular Mobilisation Force (PMF) that has by far eclipsed the Iraqi army in spearheading the counter-offensive, which has not just halted ISIL’s lightning advance towards Baghdad, but clawed back control of highly strategic areas, such as Amirli, Jurf Al Sakar and Diyala province. All these resounding triumphs took place while the U.S. stood idly by, adamantly refusing to back up the PMF. In Tikrit, however, the U.S. launched airstrikes in the final stages of the offensive, fearing that an emphatic victory by the PMF without any visible U.S. participation would critically undermine its newly established influence and fragile presence in Iraq.

Apart from the fact that the protests are essentially taking place in Shia areas, the Shia Marja has intervened for the following reasons: Firstly, the protests that started in Basra in early July were largely in defiance of a stark warning by Ammar Al Hakim, on Jun 10, bluntly threatening that such protests would cross the red lines of the Governor Majid Al Nasrawi and the local council led by his bloc ISC. He also accused protest organisers of playing into the hands of ISIL by destabilising Basra. Unsurprisingly, these unprecedented threats spectacularly backfired.

But it was beyond doubt the killing of a protester in the Al Madayna district of Basra, on July 16, that served as a rallying call, ultimately precipitating the sweeping protests which engulfed southern Iraq. The accompanying slogans also became scathingly critical, specifically targeting Ammar Al Hakim and the deputy Prime Minister Bahaa Al Araji, who is the leader of the Al-Ahrar bloc. Thus, it became abundantly clear that both leaders were fully incapable of defusing the deepening crisis.

Secondly, with the leadership of both, the ISC and Al-Ahrar deeply stunned by the sheer ferocity of anger towards them, they swiftly responded by, not merely pointing the finger of blame at Maliki, but far more ominously enticing their followers to target him, and thus seriously threatening to plunge Shia areas into an escalating tit-for-tat campaign.

Thirdly, with the Al-Ahrar bloc and the ISC, to a larger extent, claiming to represent the Shia Marja despite his strenuous denials. Therefore, critically threatening to imperil the unwavering confidence of the shia masses in the Marja.

Fourthly, the Marja was acutely aware that Abadi, who relied heavily on both the Al-Ahrar bloc and the ISC to challenge and ultimately torpedo Maliki’s bid to become PM for a third term, lacked the powerbase to defy or stand up to those blocs. Consequently, the Marja sought to shore up Abadi’s position as a priority.

Fifthly, to assume leadership of these increasingly growing, yet alarmingly vulnerable protests and to firmly block all attempts to highjack them. Finally, it was a golden opportunity for the Marja to starkly remind Shia politicians – especially those who have grown increasingly arrogant, corrupt and defiant – that the Marja is incontestably the one calling the shots, but also fully capable of pulling the plug on them.

The Marja’s decision, nevertheless, to throw his weight behind Abadi is fraught with risks, especially in the light of his government’s feckless performance and his feeble leadership on the political, economic, public services and above all the military front. His implacable determination to wholeheartedly embrace the U.S. strategy of actively sidelining the PMF – whose leading role in combating ISIL has conspicuously been vehemently opposed by Saudi Arabia under the pretext that it would not only consolidate Iran’s growing influence, but ultimately pave the way to what Saud Al Faisal, its previous foreign minister, brazenly described, on Mar 5, Iran’s take over of Iraq – has irrefutably handed ISIL its most remarkable victory in 2015: Seizing control of Ramadi, capital of Anbar provice. Abadi, defiantly refused to allow the PMF to defend the city, even when its defences were teetering on the brink of total collapse, yet, he quickly appealed to the PMF – On May 17, the same night Ramadi was overran by ISIL – not only to shore up the defences of Baghdad but also to lead the efforts to wrest back Ramadi. But while his track record does not inspire much confidence, the Marja is in an unenviable position of having to back him up, given that neither an early elections nor replacing him through a vote of no-confidence are remotely viable options.

As the popular disenfranchisement with Abadi’s government intensified, the Marja deliberately distanced himself from it, fiercely rejecting numerous attempts by ministers and even leaders of the political blocs to meet up with him. It was, however, on Jul 31, when the Marja publicly gave his ringing endorsement to the protests, prompting a dramatic surge in numbers. And thereby, preparing the ground for the Marja’s spokesman Ahmed Al Safi, on Aug 7, to present Grand Ayatollah Al Sistani’s own road map for comprehensive reform, decisively instructing Abadi to be more daring and more courageous in combating widespread corruption in his highly ineffective government by striking with an iron fist anyone tampering with public money and immediately routing incompetent senior officials regardless of the strength of their backing. He also forcefully instructed Abadi to reduce excessive salaries and privileges of senior officials, halt appointing senior officials based on sectarian or ethnic basis, investigate old and new cases of corruption and name and shame political blocs sabotaging reform.

Abadi promptly seized the Marja’s life-line, announcing, on Aug 9, a seven-points plan, which included the following key points: Firstly, abolishing the three posts of Vice President, meaning the removal of not only Maliki – who is Abadi’s arch rival, and also wields considerable power as Abadi’s boss in both the SoL bloc and Dawa Party – but also Ayad Alawi – ex-PM – and Osama Al Nujafi – ex-Speaker of Parliament –, both of them have been heavily supported by Saudi Arabia. Secondly, scraping the three positions of deputy PM, essentially removing Bahaa Al Araji, who is being investigated for alleged corruption. Thirdly, slashing the number of bodyguards for senior officials. Finally, establishing an independent committee to investigate all cases of corruption. And given that none of the political blocs want to be seen defying the explicit will of the Marja, the plan was smoothly endorsed by Abadi’s Cabinet and Parliament. Yet, it is doubtless, however, that the political blocs would tenaciously hold on to their hard-fought for privileges, thwarting reform efforts every inch of the way. Of course this raises the fundamental question: Has Abadi got what it takes to implement Grand Ayatollah Al Sistani’s anti-corruption dictates. And while the jury is still very much out, the very first signs are far from reassuring. Abadi’s announcement, on Aug 16, of ostensibly shrinking his Cabinet by a third, while in reality tightening the political bloc’s already formidable grip on all the major Ministerial positions by emphatically failing to oust ministers, who are the top leaders of their blocs, is a stark violation of one of the central undertakings in his own seven-points plan. But, more ominously, it reflects at best a PM incapable of departing from his foundering tip-toeing approach, while at worse, a PM frantically striving to cover up his faltering and inherently weak leadership by the most brazen display of amateurish spin. The Merja’s office did not hide his utter disappointment with Abadi’s ostensible reforms, starkly warning, on Aug 20, that unless his road map for genuine reform is implemented Iraq could be dragged to partition.

It is hardly surprising that Abadi’s leadership is fervently embraced by a U.S. administration hell-bent on maintaining ISIL as a credible threat to Iraq and Syria, ensuring that their staunchest backers, Iran and Russia, are far too busy propping them up rather than expanding their influence in the Middle East.

Zayd Alisa is a political analyst and a writer on Middle East affairs with numerous appearances on various TV channels, including BBC and France 24. Zayd Alisa has published several articles and press releases relating to the Middle East, and has been a human rights activist for twenty five years and have actively promoted democracy and freedom of expression in the Arab world.