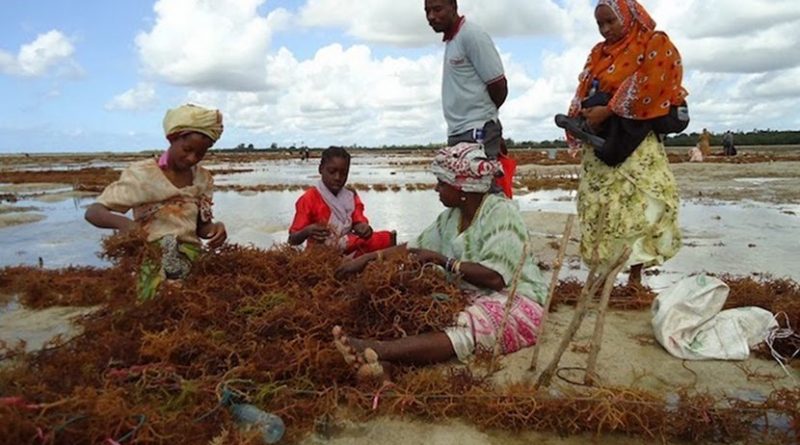 As the morning breeze sweeps Mwanamkasi Jumbe wade through knee-deep water, her gown flapping in the wind as she drags a pile of seaweed seedlings to her farm before it is too hot.

Armed with a bundle of sticks, she hangs pieces of fresh seaweed haphazardly hooked on a yellow polyethylene rope.

“It’s a tough job, but I love doing it. I get something to support my family,” she says. “The seedling takes six weeks to mature,” she adds.

The 48-year-old mother of six is among many female seaweed farmers in Tanzania’s semi-autonomous archipelago who are discovering new skills to cope with the dwindling yields, diseases and improve markets, thanks to a new government backed initiative.

Seaweed farming is an important activity contributing almost Tanzanian shillings (Tsh) 17.6 billion (US$ 8 million) to Zanzibar Isles’ economy when at its peak. The industry employs about 23,000 farmers, majority of whom are women, according to government estimates.

More than 11,000 tonnes of dry weeds are harvested and sold annually, thus contributing to 90 percent of Zanzibar marine export products, according the Zanzibar Ministry of Trade Industry and Marketing.

Despite facing many challenges in growing seaweed, Jumbe, who is in the business for more than twenty years, says the crop has helped lift her family from poverty. “My life’s better off now as compared to ten years ago,” she says.

“We are happy as a family. My husband is very supportive. He usually helps dragging the weeds during harvest,” Jumbe says

While Zanzibar seaweed farmers have for decades experienced low prices, they did not have other options than selling raw weeds to the stingy exporting companies.

But when the Zanzibar Seaweed Cruster Initiative (ZaZCI), jointly run by Zanzibar Institute of Marine Science and the government was introduced in 2006, the farmers are learning value-adding skills to bolster their incomes.

“One of the benefits that farmers get when adding value is production of seaweed powder which fetches up to Tsh 10,000 (US$ 5) per kilo,” he says. “This is a big increase in value compared with selling raw spinosum.”

According to her, a kilo of raw seaweed fetches Tsh 400, but when she processes it, the price goes up to Tsh 9,000, she says.

The initiative, which aims to improve farmers’ welfare, has so far helped thousands of seaweed farmers to seek new markets, increase their annual sales and fight climate change.

Zahra Omar, a seaweed farmer in Bweleo village in island’s west coast, whose farmers group joined the cluster initiative in 2015, says her marketing skills have been sharped and she has a stronger e power to negotiate.

“I don’t see the need to export raw products, since we can process it locally and sell it at a higher price,” she says.

At Bweleo village on the south coast, Mariam Mahmood, another seaweed farmer is also doing very well. She grows seaweed and has a shop selling various items including seaweed soaps and powder

“A lot of people had stopped growing seaweed because it was dying after becoming infected,” she says.

Researchers at Zanzibar Institute of Marine Sciences attribute the problem of seaweed mortality partly to the rising sea temperatures and more extreme weather due to climate change and bacterial infection.

“Temperatures in the shallow seaweed farms have increased from below 30 degrees centigrade in the 1990s to about 38 degrees centigrade and slightly above recorded recently,” says Flower Msuya, a marine scientist at the university,

But recent activities under the ZaZCI seaweed farmers are beginning to see a glimmer of hope and certainly a brighter future.

Under the programme, the government is equipping farmers with working tools including polyethylene ropes and are also trained to cope with the challenges they face in day-to-day business.

The government has also introduced a special “Seaweed day” on every July 23 when farmers and business community gather.

According to officials, plans are underway to introduce more seaweed processing industries.

Husna Kombo (51) was braving a scotching sun working in her seaweed farm in Pongwe village, about 43 kilometres from Zanzibar.

She says the ropes and soft plastic straws known as tie-tie given to her by the government were very helpful. “The equipment makes my job easier, I wish they provided more,” she adds.

Home » A Glimmer Of Hope For Zanzibar Seaweed Farmers

President Joko Widodo of Indonesia took part in a dialogue with global business leaders, hosted by Klaus Schwab, Founder and

What Is Khamenei’s Intention By Claims Of Building An Ocean-Rolling Warship? – opEd