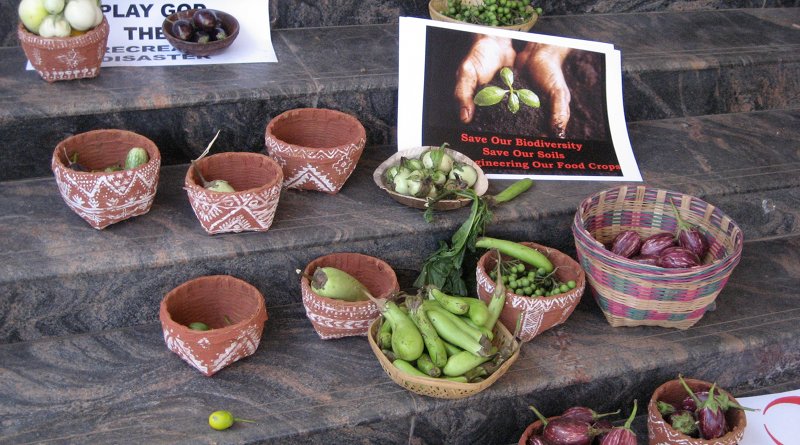 Baskets of many different kind of Brinjal (aka "Eggplant") put out by protesters during the listening tour of India's environment minister relating to the introduction of BT Brinjal. Spring 2010 in Bangalore, India. Photo Credit: Infoeco, Wikipedia Commons.

Feeding Rats With Two Types Of GM Maize: No Effects Detected On Rat Health Or Metabolism

The importance of Genetically Modified Organisms and the need to promote GM technology remain  controversial topics. Recently, a few senior Indian scientists  debated inconclusively many  aspects of GM technology including whether GM Bt cotton failed in India or not. Obviously there is a need for enlightening public by giving accurate information on this topic so that they can make an informed choice.

An issue we must settle convincingly is the health impact of GM foods even though it is virtually impossible to get irrefutable evidence on complete harmlessness of any foodstuff and that includes conventional food!

Among the Europeans, French are famously anti GMO. Ironically, French researchers  concluded an interesting study in which they  examined the effects of GM food  on health and metabolism of rats which consumed a diet containing  two types of Genetically Modified maize (MON 810 or NK603) in varying concentrations for long periods. This study, published on December 10, 2018 in Toxicological Sciences,  the official journal of the Society of Toxicology did not reveal any harmful effects in this instance.

Though they used  the most up to date, sophisticated, high-throughput biology techniques, they did not identify any significant biological markers related to the transgenic maize diet.  The anatomic pathology examination also did not reveal any alteration of the liver, kidneys or reproductive system of the rats, which ate diets containing these GM foods.

The US National Academy of Sciences Engineering and Medicine, in its book titled “Genetically Engineered Crops: Experiences and Prospects” has stated that for “various reasons, only two traits—insect resistance and herbicide resistance—had been genetically engineered into a few crop species and were in widespread use in 2015”.

It is appropriate that the French researchers studied two well-known types of GM maize: MON 810, which produces the protein Bt rendering it resistant to certain insects, and NK603 in which the modification of a gene renders it resistant to glyphosate, the chemical name for Roundup, and a well-known herbicide.

For 6 months, the researchers gave rats a diet containing either transgenic maize or non-GM control maize. Six months, which is, twice that for the test required by European regulations, is equivalent to one third of the average lifespan of rats.

The researchers looked for early biomarkers of biological function alterations in rats fed GM maize over periods of 3 and 6 months by using ultra-sensitive high-throughput techniques. In the rats fed the GM diets, anatomic pathology techniques (macro- and microscopic study of the tissues to detect potential abnormalities) revealed no alteration of the organs, particularly in the liver, kidneys and reproductive system.

They  did not detect any harmful effects of the MON810 and NK603 maize diets on the health and metabolism of the rodents, even after long exposure.

The French Ministry of Ecology launched the Risk’OGM program in light of the 2008 law on genetically modified organisms to establish a new legal and regulatory framework notably to evaluate the impact of GMOs – from the health, environmental and socioeconomic standpoints.

In the Organization for Economic Cooperation and Development (OECD), the detection of potential toxicological effects of single chemical compounds tested in vivo is generally based on a 90-day (T90) rodent trial to assess any potential unintended effects.

Within the required data for the toxicological assessment of GM plants intended to be placed on the European market, such a 90-day feeding study in rodents on whole GM food/feed to identify potential adverse effects or address remaining uncertainties is mandatory.

Despite a large body of evidence pointing to the absence of clinical effects or histo-pathological abnormalities in organs or tissues of animals fed with GM-based maize, public researchers, risk assessment bodies, industry and non-governmental organizations and the public at large debated the issues in various fora.

The French Government set up and funded the GMO90+ (Genetic Modified Organisms 90-day rodent trial extended to 180-day) project to clarify the issue. They did it successfully.

The National Academy of Sciences, Engineering and Medicine in its report  stated thus on the possible health effects of GM foods: “Many reviews have indicated that foods from GE crops are as safe as foods from non-GE crops, but the committee re-examined the original studies of this subject. The design and analysis of many animal feeding studies were not optimal, but the large number of experimental studies provided reasonable evidence that animals were not harmed by eating food derived from GE crops. Additionally, long-term data on livestock health before and after the introduction of GE crops showed no adverse effects associated with GE crops. The committee also examined epidemiological data on incidence of cancers and other human-health problems over time and found no substantiated evidence that foods from GE crops were less safe than foods from non-GE crops”.

The British Royal Society in its report  stated that GM food is safe to eat. “There is no evidence that a crop is dangerous to eat just because it is GM. There could be risks associated with the specific new gene introduced, which is why each crop with a new characteristic introduced by GM is subject to scrutiny. Since the first widespread commercialization of GM produce 18 years ago there has been no evidence of ill effects linked to the consumption of any approved GM crop.” the agency asserted.

Who eats, what and where?

The Royal Society report 2016 gives some details: “The main GM foods eaten in a fresh state are alfalfa (a member of the legume family), squash and papaya in the USA, tomato, papaya and sweet pepper in China, and aubergine (Bt Brinjal) in Bangladesh. There are no fresh GM fruit or vegetables approved for consumption by humans in the EU.”

“Tens of millions of tonnes of GM maize and soybean are exported from North and South America to other parts of the world where there is a shortage of inexpensive plant protein for animal feed. For example, about two thirds of all protein-based animal feed in the EU comes from soy, of which about 70% is imported, and over 90% of that is produced from GM soybeans. Meat, milk and eggs from animals fed with GM crops is eaten in many countries including the UK.”

The progress of science must depend on weight of evidence. Often, public perception, which need not necessarily be based on science, prevails and that gets more traction with politicians.  India after much debate banned Bt Brinjal, The then Minister of Minister of Environment and Forest Jairam Ramesh explained the reasons for the ban In the case of GM technology, Indian scientists  cannot claim that they  have played a constructive role
Bangladesh accepted the technology  and reportedly benefitted by it. The then Bangladeshi Agriculture Minister Begum Matia Chowdhury called Bt brinjal “a success story of local and foreign collaboration.”

“We will be guided by the science-based information, not by the nonscientific whispering of a section of people,” Chowdhury said.

“As human beings, it is our moral obligation that all people in our country should get food and not go to bed on an empty stomach. Biotechnology can play an important role in this effect.” she added.

Bt Brinjal is reportedly a success story in Bangladesh

“Cornell (University) worked with USAID, Mahyco and the Bangladesh Agricultural Research Institute to secure regulatory approval, and in 2014 the Bangladeshi government distributed a small number of Bt brinjal plants to 20 farmers in four districts. The next year 108 farmers grew Bt brinjal, and the following year the number of farmers more than doubled to 250. In 2017 the number increased to 6,512 and in 2018 to 27,012.”  Cornell chronicle reported. Since the report is from a promoter, some enterprising journalist must visit the area to verify the facts.

In the meanwhile, I shall keep my favourite Idli- sambar and  Samosa-Ketchup away from the prying eyes of  molecular biologists who may apply the omics-sciences genomics, proteomics or metabolomics to prove that they are bad for me!