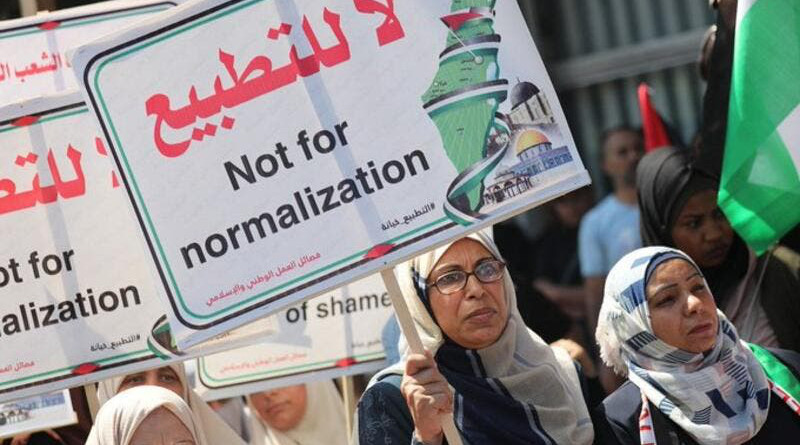 A number of Islamic scholars, including those close to the UAE’s leadership, distance themselves from a statement purporting to endorse the disputed normalisation deal between Abu Dhabi and Israel.

Several Islamic scholars have distanced themselves from a statement endorsing the UAE’s pact with Israel, which was put out by an Abu Dhabi-sponsored faith forum last week.

The Forum for Promoting Peace in Muslim Societies (FPPMS) put out the statement shortly after the agreement was announced earlier in August.

It praised the “wise” leadership of the UAE’s crown prince and de facto ruler, Mohammed bin Zayed (MBZ), and his efforts to establish stability and a “just and permanent peace” in the Middle East.

The statement was signed by the chairman of the FPPMS, Abdullah bin Bayyah, as well as a number of other members of the organisation, including the American Islamic scholars, Aisha al Adawiyah and Hamza Yusuf.

Bin Bayyah, has separately endorsed the normalisation treaty between the UAE and Israel using similar language in his capacity as the head of the Emirati Fatwa Council.

“The Emirates Fatwa Council blesses the wise leadership’s acts for the supreme good for the nation and its people,” said in the other statement.

However, amid a torrent of criticism, both Adawiyah and Yusuf rejected the statement put out in their name, denied they had ever endorsed it, and restated their support for the Palestinian cause.

Abu Dhabi has tried to spin the deal as a necessity conditioned on Israel stopping its annexation of the occupied West Bank, but Israeli leaders have agreed only to temporarily suspend it, affirming that its plan to integrate the legally Palestinian territory into Israel proper is still on the table.

Without directly addressing FPPMS or the UAE government, Hamza Yusuf said that he had never supported the deal.

“The recent reports alleging my political views were fabricated and erroneous,” the scholar said in a Facebook post, adding:

“I do not engage in or endorse geopolitical strategies or treaties. My allegiance is and has always been with the oppressed peoples of Palestine, whether Muslim, Christian, or otherwise. Anyone who says differently is a liar.”

Citing the early Islamic jurist, Imam Shafii, he wrote: “Words cannot be attributed to one who has not spoken them.”

Aisha al Adawiyah went a step further by announcing her resignation from the FPPMS over the “breach of trust”, clarifying that she was a “staunch supporter” of the Palestinian people and their liberation from Israel’s occupation.

On her Facebook page, she wrote: “In our last board meeting of the Forum, there were no discussions surrounding the topic of Palestine or the UAE’s relationship with Israel. Hence, there was no agreement on any kind of support for the UAE’s deal with Israel.”

Despite Yusuf’s repudiation of the FPPMS statement, he was criticised by the Oxford Islamic Studies academic, Usaama al Azami, for not joining Adawiyah by handing in his resignation.

The American scholar has previously faced criticism for his open and tacit endorsement of Emirati foreign policy at a time when Abu Dhabi is accused of propping up despots and destabilising a number of states in the Middle East.

Yusuf has previously lauded the UAE for its “tolerance” despite its record of jailing dissidents of all shades.

Bankrolled by the UAE, the FPPMS has long served as a rubber stamp body for UAE policy, and has given religious legitimacy to Abu Dhabi’s earlier foreign policy adventures, such as its participation of the blockade on the neighbouring Gulf state of Qatar.

A 2019 article by Middle East Eye described how Abu Dhabi has sought to co-opt so-called quietist Islamic scholars, who oppose rebellion against the rulers of a state, as a counterweight to the pro-democracy and religious movements across the Arab world, which sought to remove autocrats.

In comments made in 2017, regarding the Qatar crisis, but which could equally be applied today, academic al Azami, wrote:

“The (FPPMS) statement serves only to demonstrate to the wider world the extent to which the moral capital of scholars can be used and abused by those in power for ignoble ends. In this regard, any self-respecting scholar’s involvement merely appears to exemplify the act of shooting oneself in the foot.”