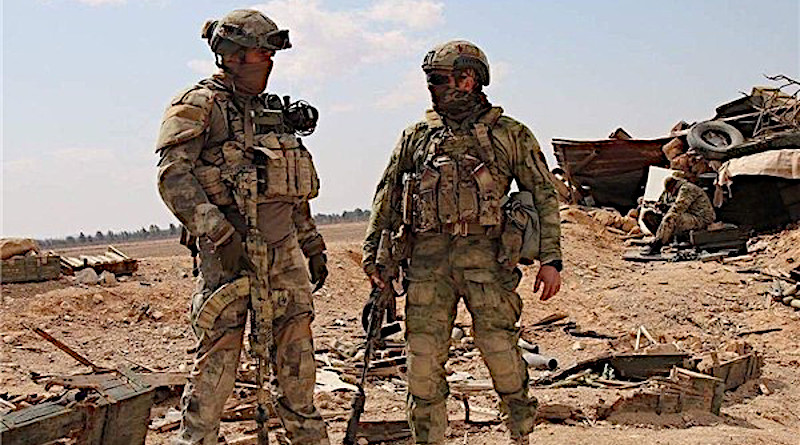 (FPRI) — It is no secret that Moscow is increasingly utilizing so-called “private military contractors” (PMCs) to pursue foreign policy objectives across the globe, especially in the Middle East and Africa. What has received less attention is that Moscow’s deployment of PMCs follows a pattern: The Kremlin is exploiting a loophole in international law by securing agreements that allow contractors to provide local assistance. The problem is, however, Russian PMCs are not simply contractors.

This pattern of Russian behavior presents a new challenge that Western policymakers should address, as it speaks to broader Russian influence in Africa in the context of great power competition. This challenge is about Moscow’s erosion of broader behavioral norms.

A similar scenario has played out in Libya, Sudan, Central African Republic (CAR), and Madagascar. First, these governments hold official senior discussions with Moscow and agree on simplified post-visits. The country then provides Russia with port or airfield access. Next, the two agree that Moscow will provide some form of local assistance, creating a legitimate reason for “private contractors” to come to a county, for example, to help with natural resource extraction or provide security. This is the loophole—technically there is nothing prohibiting Moscow from making these arrangements. The next logical step is a Russian navy or air force visit, which further solidifies the official Russian presence.

This pattern emerged around 2016. By then, in Libya, Moscow had already built relations with the United Nations-backed Government of National Accord (GNA) in Tripoli and Khalifa Haftar and his Libyan National Army in Tobruk. Moscow leaned more heavily on Haftar, who came to Moscow in July 2016 and met with senior Russian officials, including Defense Minister Sergei Shoigu. Haftar then offered Moscow a resumption of Gaddafi-era deals and suggested he could provide key port access in the east. In mid-2017 and early 2018, as ISIS took credit for several attacks in Libya, Russian special forces and “security contractors” began helping Haftar. As Reuters reported in March 2017, the contractors claimed they had a commercial arrangement to clear mines from an area that Haftar had liberated from ISIS. Russian PMCs continued to clear mines and guard port oil installations amidst doubts about the true nature of their activities. By late 2019, Libya emerged as an open proxy battleground, where Moscow increasingly asserted control not only through major deployments of PMCs and the provision of advanced weaponry, but also by providing training to Haftar’s fighters. In this context, Moscow began to openly discuss plans for a naval base in Libya.

A similar pattern unfolded in Sudan and CAR. In October 2017, Russian Foreign Minister Sergey Lavrov held talks with CAR President Faustin-Archange Touadera. CAR reportedly needed help in fighting more than a dozen militias, including the predominantly Muslim Séléka rebels and the majority Christian Anti-balaka forces, that have been locked in a war against the central government—and each other—since 2013. According to Reuters, France offered CAR guns, but Moscow “objected and donated its own weapons instead.” By February 2018, Moscow sent planes to CAR, while Russian “contractors” appeared on the ground to protect mining projects and provide security training. The next month, Putin met with then-Sudanese President Omar al-Bashir who reached out to Putin for support against “aggressive U.S. actions,” and Moscow agreed to provide equipment and other assistance to Sudanese forces. Russian Su-35 fighter jets, meanwhile, had arrived in Sudan. After the meeting, Russian mining company M Invest (now sanctioned) received preferential access to Sudanese gold mines. Russian official statistics also showed an increase in Russian citizens travelling to Sudan by the end of the year. By at least July 2018, Russian PMCs appeared in training camps in Sudan, while CAR and Russia signed a military cooperation agreement that allowed Russia to train CAR’s military and send “advisors” the next month.

In early to mid-2019, Moscow and Khartoum unveiled a number of economic, security, and military cooperation agreements, from oil and gold mining to the training and equipping of the Sudanese military. According to multiple reports, Russian PMCs increasingly became involved in the country, where the Wagner Group—owned by Yevgeniy Prigozhin, who has close ties to Putin—not only had secured survey and mining rights, but also helped to delegitimize opposition to Bashir and train the Sudanese military. The same PMCs appeared to have trained Sudanese and CAR troops. Bashir fell from power in April 2019, but Moscow retains ties to Sudan and appears to still be interested in securing a base in the country.

Meanwhile, in CAR, several Russian-based companies, such as Lobaye Invest Sarlu, secured mining and trade rights. Not only did Moscow bring weapons into CAR, but the UN also officially approved a Russian military training mission there (but did not expect PMC involvement). Russia supported the lifting of the UN arms embargo in place since 2013. In exchange, CAR allowed Moscow to establish a Russian mining company and airfield facility, which necessitated bringing Russian “contractors,” such as the Wagner Group. By October 2019, after Moscow co-hosted with Egypt the first-of-its-kind Africa summit, CAR President Touadéra said he is pursuing talks about opening a Russian base in the country. Indeed, the immediate economic results of the Africa summit were paltry. Its real value—as is often the case with Russia—was more about political capital for Moscow.

Following a similar pattern, senior Russian officials held a number of high-level talks and exchanges throughout 2017 and 2018 with Madagascar’s leadership. The country is rich in gold, cobalt, nickel, and uranium reserves, and then-President Hery Rajaonarimampianina promised Moscow lucrative access to its natural resources. This is when the Wagner Group appeared on the scene, along with Ferrum Mining, an apparent front company for Prigozhin. In October 2018, Russian warfare ship Severomorsk completed a port call to Madagascar’s Antsiranana port. Wagner tried and failed to influence the November 2018 presidential election in Madagascar; regardless of that failure, in October 2019, the two countries signed a military cooperation agreement.

Moscow has long understood Africa’s enormous potential and attempted modest outreach in the mid-2000s. In July 2009, then-Russian President Dmitry Medvedev, along with a delegation of Russian business representatives, toured Africa. While then-President Barack Obama had talked to African leaders about global warming, the Kremlin focused on pragmatic issues that they could relate to—arms and natural resources, such as oil and diamonds. This approach paid off, and Moscow signed a number of agreements on arms deliveries and economic cooperation. Speaking at Russia’s premier annual Valdai conference in October 2016, Putin said that Africa cannot be on the periphery of international relations, which highlighted the importance he places on this continent.

African leaders also seek engagement with Moscow for their own ends. In CAR, for example, Touadera’s announcement about plans for a Russian base (which the Kremlin denied) could have been his way of playing Russia against France and the United States to garner prestige and international attention for CAR. But it is also no secret that, in general, Moscow tends to covet base and port access in strategic countries, as long as it doesn’t involve a significant amount of resources. Such a base in CAR would allow for future visits and deployment of the Russian air force. And Russian bases in Africa can become reality. Indeed, in August 2020, German daily Bild reported, based on a leaked German foreign ministry document, that Moscow received assurance that it can build military bases in CAR, Egypt, Madagascar, Mozambique, and Sudan.

Moscow also capitalizes on the absence of a colonial legacy in Africa, unlike Western countries, which have a long history of colonization there. Thus, Russia’s image is more positive than it would merit. Most of all, however, Moscow benefits from American disinterest in Africa. While sanctions are an important tool and the United States should continue using them, they alone are not enough to counter Russian activities in Africa. China’s influence in the region is not necessarily going to stop Moscow—rather the two simply carve out spheres of influence, with Russia focusing more on political and military-related aspects as China has already carved out a major economic role. While both countries are also interested in natural resources, China needs to import energy, unlike Russia. But more to the point, neither side is interested a clash to begin with—Moscow right now has no ability to challenge China, and the two sides instead continue to deepen ties.

Russian’s growing presence in Africa—and its use of PMCs—should be a cause for concern in the United States. The way in which Russia has utilized PMCs in CAR, Sudan, and Libya demonstrates one aspect of its developing strategy not just in Africa, but also in Syria, Ukraine, and Venezuela. This perhaps is the broader implication with Russian PMCs: they serve as a useful tool to chip away at the U.S.-led global order by eroding the norms of behavior when Moscow knows that it cannot confront the United States directly. As policymakers think of great power competition with Russia and China, this is something that they cannot ignore.

With thanks to Erin Sindle.

*About the author: Anna Borshchevskaya is a Senior Fellow at The Washington Institute, focusing on Russia’s policy toward the Middle East.