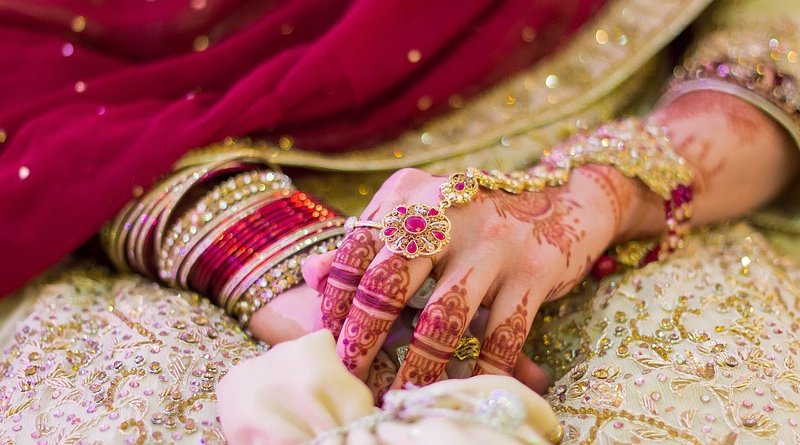 (UCA News) — They say marriages are made in heaven but in the western Indian state of Gujarat, a dubious syndicate of paid agents is playing matchmaker for the mostly jobless boys from the prosperous Patel community and young girls from the indigenous Adivasi communities.

The consequences are evidently disturbing and causing much pain and loss to the poor tribal people, who are highly protective of their girls like any class or caste community in India.

Bharatiya Tribal Party (BTP) leader Raj Vasava says this has been a common practice among the Hindu Patel men to buy tribal women for marriage. But now it is being resented by the tribal communities. “It is a cultural assault and cannot be allowed,” he said.

But the Patels, who are socially, economically and politically the most influential community in Gujarat, have no other way to deal with their skewed sex ratio of 700 girls for every 1,000 boys.

The state has some 10 million tribal people among its 62 million population. The state also has some 350,000 Christians, an estimated half of them are tribal people.

While selecting brides, the Patels do not distinguish between Christian and Hindu tribal people, a Petel leader said.

“It’s not as if all boys do not find a suitable match. Only those without secure jobs or business incomes have to marry outside the community,” he explained.

But the biggest problem facing the Patels, he said, echoing similar concerns to the tribal leader, was that “most of our daughters are marrying outside the community. And we need to stop it.”

Patel said many educated girls of marriageable age were eloping with non-Patel boys and that really was the problem. When pressed further, he refused to go into detail.

Interfaith and inter-community marriages have been a hot topic in Gujarat ever since the state assembly passed an amendment to its Freedom of Religion Act in April 2021 seeking to penalize forcible religious conversion through marriage or allurement, termed as “love jihad.”

The amendment defines “allurement” as promising a “better lifestyle, divine blessings, or otherwise.” Anybody guilty of the “crime” can be sentenced to jail for up to 10 years and pay a fine of up to 500,000 rupees (about US$6,700).

The grievances of the Adivasi and Patel communities may sound similar to those of the pro-Hindu outfits fighting to save their daughters from so-called love jihad purportedly carried out by Muslims, but the Gujarat law cannot be expected to help them.

“This bogey of love jihad is an invented and manufactured narrative to weaponize and polarize society, which is the sole political objective of Hindutva forces,” said Prof. Gaurang Jani, who teaches sociology at Gujarat University.

Gujarat is the fourth Indian state ruled by the pro-Hindu Bharatiya Janata Party (BJP) to enact such a law. However, it refuses to even talk about the problem of Patels seeking tribal girls to marry their boys due to a skewed sex ratio.

But tribal people across Gujarat are growing increasingly resentful of this practice, which they perceive as being thrust upon them due to their poor socioeconomic status.

Interestingly, the sex ratio among the 1.1 million tribal people of Gujarat spread across 14 of its 33 districts is comparable to the national average of 940 females per 1,000 males. Unlike the more prosperous communities, they do not believe in male child preference.

Raj Vasava said it was their poor gender ratio that made the Patels target tribal girls. “Usually, a local woman is given money to identify young tribal girls including divorcees. Once the marriage is solemnized, the girls are exploited as child-producing machines,” he said.

This was more dangerous than love jihad, Vasava said while citing instances of how parents of tribal girls married in Patel households were casually told their daughters were dead or missing when they enquired.

There have been incidents of some girls returning to their parental homes after being ill-treated by their husbands and in-laws, he added.

Dr. Anil Joshiyara, a tribal leader and Congress lawmaker from Sabarkantha, told UCA News: “Such incidents were common in earlier times. But now our community members, especially the youth, have awakened and have taken upon themselves to deal with the Patels and their marriage agents. They are caught and thrashed.”

Pushed to the brink, the Patels now want the state government to introduce a new law making it mandatory for girls to marry within their own communities. There should be a provision that no marriage can be solemnized without the approval of the family and relatives, Lalji Patel said

The SPG has been campaigning for such a law preventing girls from marrying out of their choice.

Reshma Patel, state president of the Nationalist Congress Party, said it was fine to demand such a law but the Patel community will have to first end the discrimination against female children.

“Without exception, every Patel wants his first child to be male, which is very unfortunate,” she said.