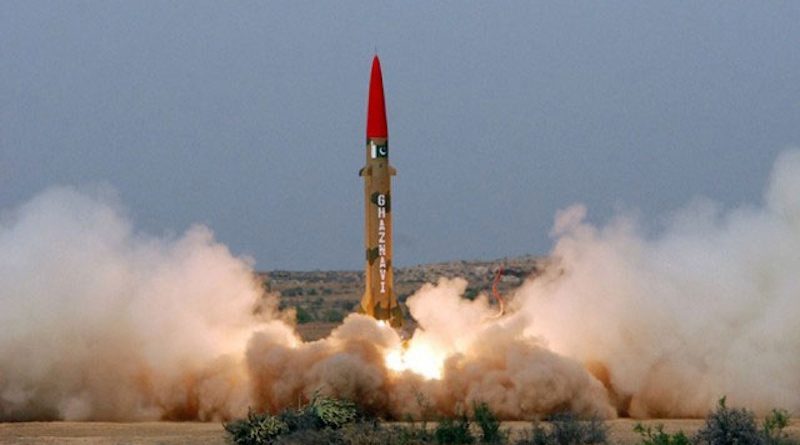 On 12th August 2021 Pakistan successfully conducted the training launch of short-range nuclear-capable ballistic missile ‘Ghaznavi (Hatf 3)’. As per the statement by the ISPR, the purpose of the training launch was to ensure ‘ASFC’ (Army Strategic Forces Command) operational readiness and in order to re-validate the technical parameters of the weapon system. The Commander ASFC Lt. Gen Muhammad Ali along with senior officers from ASFC, Strategic Plans Division, and engineers and scientists of strategic organizations also witnessed the launch of ​​the ballistic missile. ISPR further stated that the Ghaznavi consists of a proper ‘terminal guidance system’.  The ASFC troops have been conducting various training launches in recent years to check the operating and handling of this complex weapon system. The missile was tested in both night and day modes because ASFC highly relies on it as it brings various Indian military bases and cantonments within its range.

The range of Ghaznavi is 300km and has been derivative of China’s short-range ballistic missile DF-11. Originally Pakistan started developing Ghaznavi in 1987 but later on terminated this program after the induction of Chinese missiles M-11 ‘DF-11’ in​ (the)​ 1990s. They were later named as Ghaznavi missile. The first test was conducted by Pakistan in May 2002 and it became fully operational in 2004. Visually, the missile resembles DF-11 with 0.8m diameter, 8.5 m length and 4,650 kg in weight. It has the capability of carrying a single warhead weighing 700kg to 290-300km of range. The missile is solid propelled, single-stage and is launched by wheeled four-axle “TEL” (Transporter Elector Launcher). It can load various nuclear payloads, conventional unitary and submunition. The Nuclear equipped variant of the missile consists of a single 5 to 12 Kt warhead. Estimated accuracy of 250m ‘CEP’ (Circular Error Probable) is provided by the inertial guidance system of Ghaznavi.

The aim of Pakistan’s full spectrum deterrence policy also is to bring every Indian target within Pakistan’s striking range. Gen Kidwai defined the three elements of FSD that included the possession of a full spectrum of nuclear weapons in all categories “operational, strategic and tactical” with complete coverage of India’s landmass and outlying territories. As per the second element of the FSD, in order to deter the massive retaliation from the adversary, Pakistan must have enough numbers and appropriate weapons yield coverage. The third element is having the liberty to choose from the full spectrum of targets despite the ballistic missile defence and to include counterforce, battlefield, and ​​counter-value​ ​​targets. Hence, Pakistan has decided to fill the strategic gap in its force posture gradually by developing​  ​​nuclear-tipped missiles in air, land, and sea and counter India’s conventional superiority.​The induction of Ghaznavi is very crucial as it brings several Indian targets within its range.

The successful training test of Ghaznavi further strengthens Pakistan’s defense strategy that is to rapidly evolve the missiles arsenals in order to offset the conventional military advantages of India. With the development of medium and short-range ballistic missiles along with its cruise missile capability, Pakistan can successfully target any point in India. Moreover,​it is also speculated to consist of MIRV “Multiple Independent Reentry Vehicle” a capability ​​that has become very significant after looking at India’s counterforce aspirations against Pakistan. It has become quite evident that India has shifted its posture towards counterforce nuclear doctrine. Moreover, with India’s advanced air defense system and induction of the Russian S-400, Pakistan needs to maintain significant countermeasure. Hence in this regard MIRV capability and accuracy of short range ballistic missile Ghaznavi could prove to be a reliable platform that can be used to penetrate through the air defense shield of India.

The development of short, tactical, and medium range missiles that are aimed at deterring any Indian aggression has also reduced the space for low intensity and limited war. It is in the other words is ensuring the deterrence equilibrium in South Asia. Since Pakistan’s nuclear doctrine and its nuclear capability ​​are aimed to secure the sovereignty of the state, the up-gradation and development of nuclear warhead delivery systems are also necessary to preserve its nuclear deterrence equation.