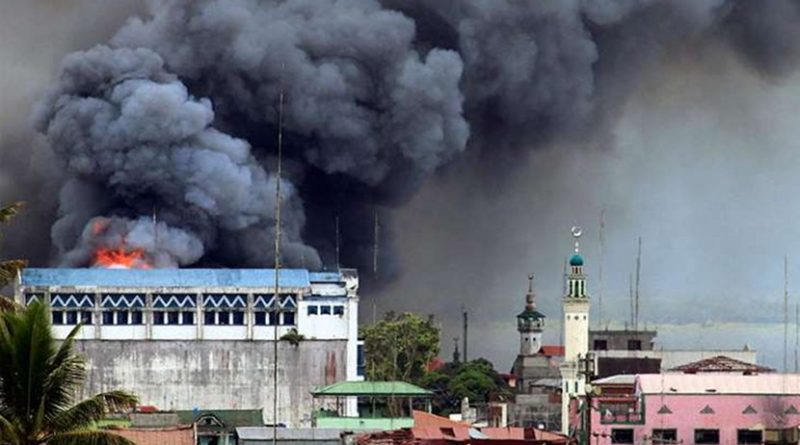 A building in Marawi is set ablaze by airstrikes carried out by the Philippine Air Force. Photo by Mark Jhomel, Wikipedia Commons.

Winning the War after the Battle for Marawi requires greater cooperation among ASEAN states. The continuing challenge posed by violent extremism must be met by a wider “community of practice”.

Nearly a year after the Battle for Marawi ended, Philippine President Rodrigo Duterte’s martial law over Mindanao has not fully addressed the threat posed by other Islamic State-linked groups. Manila continues to grapple with the challenges of countering violent extremism (CVE). A series of bombings in Sultan Kudarat, North Cotabato, and South Cotabato by members of the Bangsamoro Islamic Freedom Fighters (BIFF) underscore the gaps in kinetic military approaches.

ASEAN was quick to act when the fighting erupted in Marawi. Singapore was one of the first countries to send in humanitarian supplies to the beleaguered city. Indonesia, Malaysia, and the Philippines put into place joint, trilateral border patrols to prevent the spread of armed conflict. Aside from dealing with the consequences of the Marawi siege, Southeast Asian countries cooperated closely in sharing knowledge to confront violent extremist groups. The ASEAN defence ministers have been discussing the establishment of the “Our Eyes” Initiative that seeks to institutionalise further pre-existing intelligence sharing mechanisms.

Winning the War After Battle

Winning the war after the battle is a familiar refrain for those looking at post-conflict scenarios from Mosul to Marawi. The ruins of what was once the commercial heart of Marawi stand testament to the long-term disruption posed by violent extremism. The razing of dozens of mosques and madrasahs in Marawi imperils the city’s status as the Philippines’ centre for Islamic learning.

Delayed reconstruction of the city would only lead to resentment and create the wellspring for terrorist narratives in the future. The military defeat of the Maute Group and its IS-linked allies in Marawi is only the first step in rebuilding the city.

Information operations by the Philippine military complemented its combat operations during the Battle for Marawi. Confronting terrorist ideologies online denied IS-linked groups full control of the informational space. Partnerships with major social media companies and other states led to the systematic takedown of harmful content.

Communities of Practice Against Other “Extremisms”

As communities of practice emerge around CVE initiatives, there is recognition among stakeholders in the security sector, civil society organisations (CSOs), and academia of the complex policy environment. Growing polarisation within states can lead to the emergence of other potential “extremisms” aside from the brand of violence associated with the so-called Islamic State and other resurgent groups such as Al Qaeda.

This is apparent in ASEAN, which has witnessed the continuation of sectarian violence. Violence has come from a broad range of actors from inchoate nationalist movements to secessionist groups.

Rather than a fixation with counter-narratives, there is an emerging consensus that CVE has more in common with non-securitised digital literacy and public education programmes. Southeast Asian youths remain vulnerable to recruitment by violent extremist groups. Developing critical thinking skills especially among the youth may lead to benefits beyond the CVE realm. Life skills that help inoculate against violent ideologies are also relevant in mitigating the effects of deliberate online falsehoods or information operations by hostile parties.

Unfortunately, there is an uneven distribution of government capacities to pursue holistic CVE among ASEAN member-states. One way to level the playing field is to share lessons learned and identify gaps, through events such as the upcoming counter-terrorism symposium to be held in Singapore in October 2018 organised by the S.Rajaratnam School of International Studies (RSIS) and the government.

ASEAN’s push to create a resilient and networked community of peoples could manifest with states acting as enablers for joint initiatives. ASEAN’s long record of accomplishment in fostering Track 1.5 and Track 2 initiatives would mean not having to reinvent the wheel in terms of harnessing the efforts of states and CSOs. CSOs have a better grasp of ‘ground truth’ while states have access to resources to build inclusive CVE programmes.

Beyond upstream efforts to inoculate vulnerable populations from violent extremism, ASEAN can help bring needed quality-of-life improvements in Mindanao. The recent signing of the Bangsamoro Organic Law (BOL) is expected to bring meaningful political and economic autonomy to Filipino Muslims. The BOL’s success rests on the ability of local elected officials to take the lead in bringing progress to their communities.

Given the uneven levels of local governance in Mindanao, ASEAN can help tip the scales by focusing on capacity-building programmes. Addressing the socioeconomic roots of conflict in Mindanao is of course a long-term project. However, its benefits go beyond dissipating the sources of rage that violent extremists tap into for their radicalisation activities.

Gaining valuable experience in promoting good governance could pay dividends even in non-security issues across Southeast Asia. Economic and political development forges stronger communal bonds. This could help stem the increasing appeal of populist politics and the intolerance it breeds within states.

Multilateral security mechanisms should just be the start of holistic CVE efforts. Across ASEAN, national-level best practices can be found, involving either or both states and non-state entities. The challenge lies in taking what works from one country and adapting it to suit local conditions in another country.

Adversaries like IS are continually evolving, seeking to exploit emerging technologies and building their own illicit networks. States and their partners, whether technology firms or CSOs, need to adapt quicker. The destruction wrought by IS-linked militants in Marawi is a cautionary example of what happens when drivers of conflict are not systematically addressed and security services become complacent.

*Joseph Franco is a Research Fellow with the Centre of Excellence for National Security (CENS), a constituent unit of the S. Rajaratnam School of International Studies (RSIS), Nanyang Technological University (NTU), Singapore.