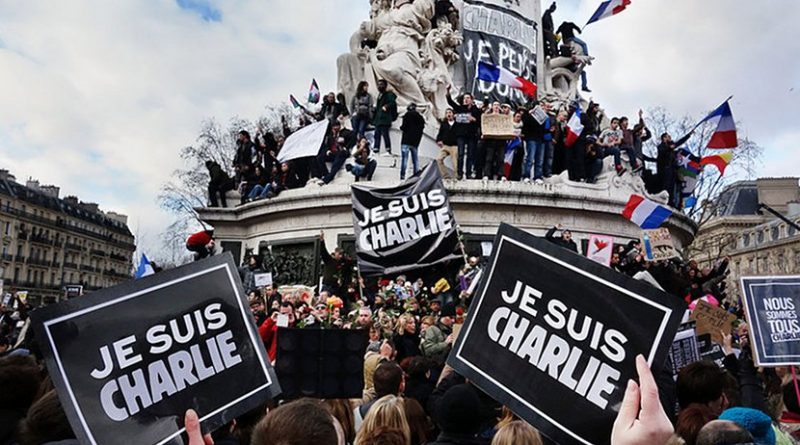 (RFE/RL) — The Pakistan-born teenager arrested on suspicion of stabbing two people with a meat cleaver has admitted to deliberately targeting the former Paris office of Charlie Hebdo magazine.

The 18-year-old, named by investigators as Hassan A., reportedly tied the attack to the satirical magazine’s recent republication of cartoons of the Prophet Mohammed, investigators said on September 26.

The stabbings came roughly three weeks after the start of the trial in Paris of 14 suspected accomplices in the January 2015 attacks on Charlie Hebdo, in which 12 were killed.

The court has heard that the suspects had sought to avenge the Prophet Muhammad, nearly a decade after Charlie Hebdo published cartoons mocking him. Ahead of the start of the trial, Charlie Hebdo reprinted some of the caricatures.

The two wounded victims of the September 25 stabbing–a man and a woman–were taking a cigarette break outside Premieres Lignes news-production agency when the incident occurred.

Premieres Lignes’s offices are on the same block in central Paris that formerly housed Charlie Hebdo.

A source close to the inquiry told AFP that the Pakistani teenager mistakenly believed Charlie Hebdo’s offices were still in that building and wanted to attack journalists from the magazine.

Charlie Hebdo moved offices after the 2015 attack and its current address is kept secret.

The suspect, who was arrested with blood on his clothing not far from the crime scene, “takes responsibility for his action” and places the attack “in the context of the republication of cartoons” of the Prophet Mohammed in Charlie Hebdo on the eve of the trial opening, sources told AFP news agency.

“Obviously, there is little doubt. It’s a new bloody attack against our country, against journalists, against this society,” he said in an interview with the France 2 television station.

Anti-terror prosecutors have opened an investigation.

The interior minister said the main suspect was believed to have arrived in France three years ago as an unaccompanied minor from Pakistan. He had not been flagged for radicalization.

Investigators he acted alone but police have detained eight other people for questioning, including the suspect’s younger brother.

An Algerian man who was also arrested shortly after the stabbings for possible links to main suspect has been released. His lawyer told AFP that the man had tried to stop the attacker.