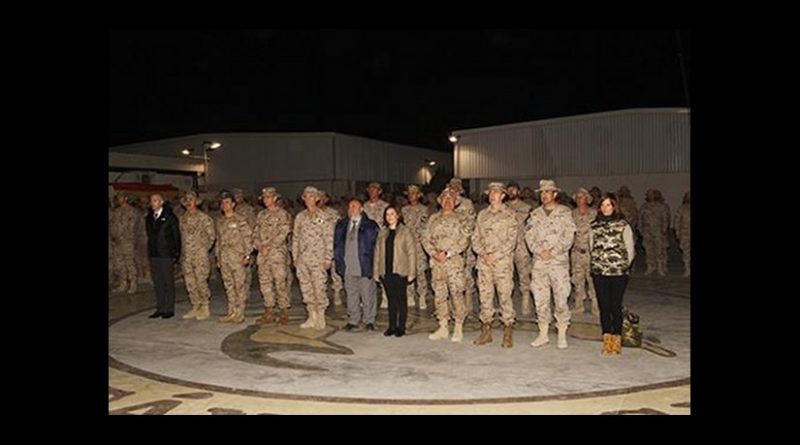 Spain's Deputy Prime Minister Soraya Sáenz de Santamaría, presided over the final lowering of the flag at the Forward Support Base in Herat.

Saturday night, at the Forward Support Base in Herat, the flag of the Spanish contingent deployed in this town in the west of Afghanistan for the last 10 years was lowered for the final time. This act, presided over by the Spanish Deputy Prime Minister Soraya Sáenz de Santamaría, practically brings the operations of the Spanish Armed Forces in this Central Asian country to a conclusion, where they have been present since January 2002.

On the various missions carried out consecutively over the last almost 14 years, a total of 29,861 military personnel from the three Armed Forces and the Guardia Civil have taken part, with 102 fatal casualties (including two civilian interpreters). As a whole, the operation in Afghanistan has been the main challenge taken on by the Spanish Armed Forces in terms of international missions, in a difficult logistical and operational situation in a complex theatre more than 6,000 kilometres from Spain for a contingent of up to 1,500 professional personnel.

Some 450 Spanish military personnel remain in Herat tasked with completing the dismantling of installations that are not due to be handed over to the Afghan authorities. The staggered withdrawal of men and resources starting back in the summer will conclude on 27 October, at which time the only personnel that will remain in Afghanistan are those deployed at the General Headquarters of the Resolute Support Mission, in the capital Kabul. It turned out that some 90 Spanish military personnel are using the same plane as used to transport the Vice-President of the Government on her return to Spain.
Government and society expresses gratitude

Soraya Sáenz de Santamaría and her entourage arrived in Herat on a flight from Madrid in the late afternoon of Saturday, after being forced to stop over in Turkey for almost 12 hours due to a technical problem to the aircraft.

Accompanied by the Chief of the Defence Staff, General Fernando García Sánchez, and of the Army, General Jaime Domínguez Buj, she was received upon her arrival by the Spanish Ambassador to Afghanistan, Emilio Pérez de Agreda, as well as by the Italian General, Mauro D’Ubaldi, head of the Forward Support Base in Herat and Colonel Francisco José García Parra, head of the Spanish contingent.

Once at the Spanish camp, Sáenz de Santamaría presided over the lowering of the flag. In a speech, she highlighted that almost 30,000 Spanish military personnel have taken part in this mission, carrying out some 28,000 patrols, traveling more than 3 million kilometers and carrying out over 1,000 weapons inspections and 14,000 deactivations of mines and other explosive ordnance.

Sáenz de Santamaría expressed the government’s acknowledgement and that of all of Spanish society, for the work carried out by the armed forces, not only during the course of their 14-year presence in Afghanistan, but also on other international missions on which 2,576 Spanish military personnel are deployed .

In reference to the mission that is now coming to an end, the Vice-President of the Government pointed out that “we cannot forget that we came to a war that has required a tremendous effort and sacrifice on the part of the Spanish military personnel deployed in this theatre of operations through to the bitter end. 100 of our best men and women, she added, have given their lives to defending the stability and a better future for Afghanistan. They have left a debt of gratitude that we will never be able to pay back”.

After lowering the flag for the final time in Herat, it was presented by the head of the Spanish contingent to Sáenz de Santamaría, who then travelled back to Spain.