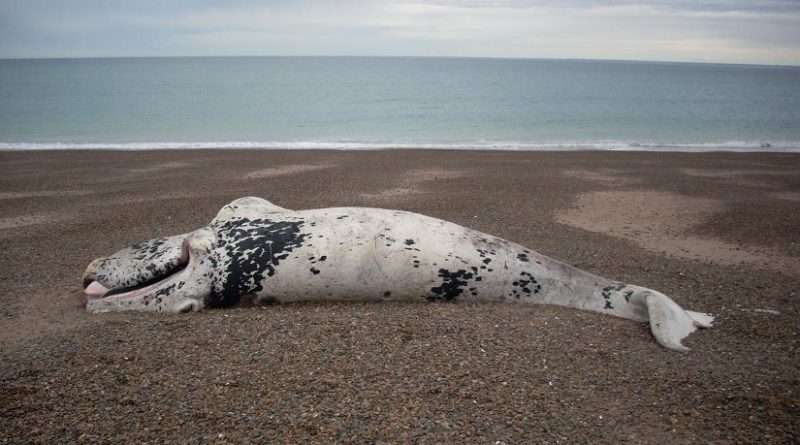 This is a right whale calf washed up at Peninsula Valdes, Argentina. New research indicates a likely connection between the deaths of hundreds such calves starting in the mid-2000s and blooms of the toxic algae Pseudo-nitzschia. Credit: Andrea Chirife, Southern Right Whale Health Monitoring Program

The baby whales suddenly began dying in 2005. And continued for several years running.

Scientists had never seen anything like it around Peninsula Valdes, an important calving ground for southern right whales on the coast of Argentina, or anywhere else for that matter. The average number of right whale deaths per year at Peninsula Valdes jumped more than 10-fold, from fewer than six per year before 2005 to 65 per year from 2005 to 2014.

Even more striking, 90 percent of the deaths from 2005 to 2014 were very young calves fewer than three months old. The mystery killer appeared to be targeting the nearly newborn, sometimes more than 100 calves of the endangered species each year.

Now researchers have closed in on a prime suspect: Blooms of toxic algae, the same kind that sometimes force the closure of clamming and other shellfish harvesting.

In a new paper published in Marine Mammal Science, NOAA Fisheries and NOAA Ocean Service scientists and others from the United States and Argentina found that the number of whale deaths at Peninsula Valdes closely track the concentrations of the toxic algae Pseudo-nitzschia. The higher the density of Pseudo-nitzschia, some species of which can produce a potent neurotoxin called domoic acid, the more young whales that died. When the density of algae dropped, so did the number of deaths.

The correlation is not definitive proof that the algae caused the deaths, but is strongly suggestive.

“The numbers hinge at the same point and have the same pattern,” said Cara Wilson, an oceanographer at NOAA Fisheries’ Southwest Fisheries Science Center and lead author of the paper. “What’s unusual about this is how long these bloom events continued to reoccur. You don’t usually have deaths every year but the calves died in high numbers every year from 2007 to 2013.”

The finding has significance beyond Argentina, since it demonstrates that some of the largest creatures in the ocean can be vulnerable to algal blooms that are projected to increase with climate change. One of the largest harmful algal blooms of its kind hit the West Coast of the United States earlier this year following close to a year of unusually warm water temperatures offshore.

Scientists are also studying whether harmful algae could have contributed to a recent spike in the deaths of adult whales in Alaska, which NOAA has declared an Unusual Mortality Event.

The study of whale deaths in Argentina demonstrates the challenges of tracing the impacts of harmful algal blooms, also known as HABs. Scientists know that whales may directly consume the toxic algae as they filter ocean water for food or may be exposed indirectly through their prey, which can also feed on the toxic algal cells. But the blooms can be spotty, with high concentrations in some places but not others. Scientists also have a difficult time obtaining blood or tissue samples from stricken whales for testing. Only a very few Argentinian whales tested for domoic acid carried detectable levels of the toxin.

That may be because the toxin is water soluble and whales eliminate it through their urine and feces. Feces from adult Argentinian whales did show that they had been exposed to the toxin, although not necessarily at high enough concentrations to kill them based on data from previous studies of other right whale populations.

But calves may be different, said Victoria Rowntree of the Southern Right Whale Health Monitoring Program and an associate research professor at the University of Utah who also coauthored the new paper. Studies on rodents found that levels of toxins that do not harm adults can cause developmental effects in fetuses. While adult whales may excrete the toxin, fetuses may be bathed in it and might then be born in compromised condition, Rowntree said.

“If this happens on land you might see that something is wrong,” she said. “But with whales in the water, seizures are rarely observed and are probably fatal.”

Given the lack of solid evidence the new study does not definitively prove that the toxic algae caused the spike in deaths of whale calves. But it does offer strong circumstantial evidence, and that puts researchers in a better position to understand the possible impacts of future algal blooms, said Gregory Doucette, an oceanographer at NOAA’s Ocean Service, National Centers for Coastal Ocean Science, and also a coauthor of the paper.

“For us, the more opportunities we have to try to examine that relationship, to link up these mortality events to potentially toxic blooms, the better we can assess the possible effects,” said Doucette, who has studied the effects of harmful algal blooms on marine mammals. “The toxins may be causing non-lethal effects that are not fatal by themselves but affect the animals’ survival.”