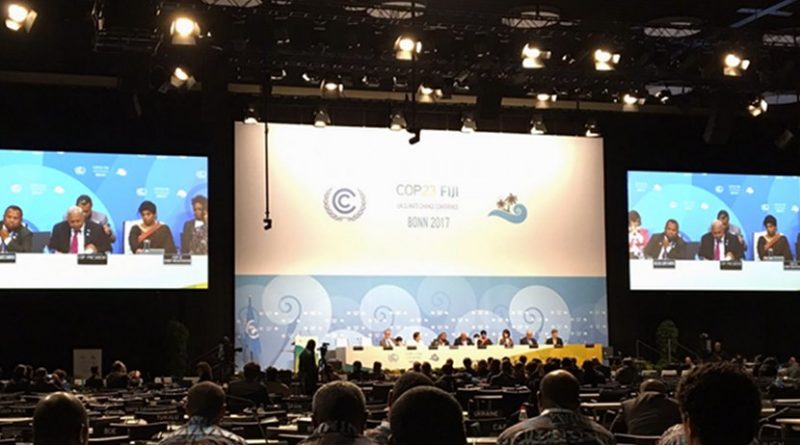 At the 19th Conference of Parties (COP 19) held in December 2013 in Warsaw, a mechanism called the Warsaw International Mechanism (WIM) on Loss and Damage was agreed upon. The Loss and Damage Mechanism was commenced to address the implementation of approaches which would tackle loss and damage associated with “the adverse effects of climate change”. Initiated under the United Nations Framework Convention on Climate Change (UNFCCC), the main functions of this mechanism are the following three (UNFCCC, 2017):

Two years later on December 2015, we saw the formation of the Paris Agreement on COP 21. Article 8 of the Paris agreement focused on loss and damage. It again recognized the importance of averting, minimizing and addressing loss and damage associated with “the adverse effects of climate change” which included extreme weather events and slow onset events. It also expressed intention to promote the understanding, action and support among parties and emphasized on the role of sustainable development in reducing the risk of loss and damage (COP 21, 2015). But to be honest, these achievements have mostly become throwback meeting minutes for people in high tables. The real solutions still hasn’t come from these initiatives which was initially anticipated.

Neither the Paris Agreement nor the COP decisions had any specific direction regarding any financial support for loss and damage. It was merely suggested that the parties should increase support for loss and damage. In fact, paragraph 52 of the COP decision is similar to an “exclusion clause” which states that “provisions defined in article 8 of the agreement do not include or are a basis for liability or compensation.” (Künzel, Schäfer, Minninger, & Baldrich, 2017) This obviously didn’t get a warm welcome from the affected parties who expected more from the countries mainly responsible for rapid climate change.

The major instrument discussed by the WIM so far to address the issue of loss and damage is climate risk insurance. The idea is that it will serve as a facilitative mechanism for support against the loss of assets, livelihoods and lives caused by climate change. But as the global climate change-induced disasters are on the rise, how this instrument will sustain in the long run remains a topic of contention (Thomas et al., 2017).

In just July this year, unusual heavy floods have resulted in the death of more than 1,200 people and it affected the lives of 43 million people in Bangladesh, Nepal and India. Pakistan was also the victim of an ominous monsoon cyclone which killed 16 and affected millions. These extreme weather events in South Asia are predicted to rise as the global temperature continues to hike (GBSNP Varma, 2015). In fact, it has been projected that South Asia will be among the worst affected regions to be devastated by climate change (Eckstein, Künzel, & Schäfer, 2017). In a region where a quarter of the world’s population lives, how the insurance mechanism will work after a major climate-change induced disaster is not clear.

Following COP 19 and the Paris Agreement, this year’s COP (COP 23 in Bonn) was started with the hope of a more definite and practical addressing to “Loss and Damage”. Affected parties really wanted something meaningful to happen. But, ultimately, there were no real outcome on this at the end of the conference. Many climate vulnerable countries which includes island nations and developing countries, was hoping to get permanent and secure monetary support for their adaptation programs to mitigate the loss and damages, but the developed countries seemed to have found a way to not reach a consensus on this issue in COP 23 (Saiful Islam, 2017).

Instead, the latest conference in Bonn appeared to have gain an altogether different purpose than intended, which is the promotion of the concept of a clearing house. Clearing house for risk transfer is basically a repository of information on insurance and related subjects. Harjeet Singh, global lead on climate change for ActionAid International said a harsh truth about the Clearing house to an interview on the third pole. He commented, “All this fanfare about the clearinghouse is actually just about a matchmaking website that can help private companies meet more clients.” He also expressed concern about the efforts and money of developed countries in this cause, which, in his opinion are ultimately helping private companies make profit from selling insurance to the poor (The Third Pole, 2017).

This is indeed disappointing for the affected countries and regions like South Asia but they have to be determined and resilient as ever. It will be important to note that apart from the clearing houses, some of the best practices identified by the Executive Committee of the Warsaw International Mechanism on Loss and Damage (ExCom) include ideas like comprehensive risk management capacity with risk pooling and transfer, contingency finance, climate-themed bonds, catastrophe bonds and financing approaches to make development climate more resilient (Künzel et al., 2017).

Affected countries and regions have to think about other innovative means of addressing Loss and Damage. Several actors have indeed come up with some innovative financial means for addressing this pressing issue. Germanwatch compiled a list of innovative solutions suggested from around the world (Künzel et al., 2017), they are:

Financial Transaction Tax (FTT): This proposes a fee on transactions and trades such as bonds, stocks and currencies. Proponents say that it could generate a significant amount of money. But there remains some practical challenges when it comes to the implementation of this idea.

International Airline Passenger Levy (IAPAL): This proposes a fee on international airline tickets. It was first proposed to UNFCCC in 2008 and was renewed in 2016. It also suffers the same problem of implementation.

Solidarity Levy: A concept of levy determined individually by the countries and on various things. It focuses the collection of money for a common cause.

Bunker Fuels Levy: This is a highly potential area for development. It proposes Tax on emissions by cargo ships and airplanes. Although it hasn’t been implemented yet.
Fossil Fuels Major Carbon Levy: The concept of this is developed by the Climate Justice Programme (CJP). It proposes to levy tax targeting the 90 major fossil fuel extracting companies who are alone responsible for 63 % of greenhouse gas emissions (Climate Justice Programme, 2014).

Global Carbon Levy: It proposes a global carbon pricing system either by tax or a trading scheme. An additional advantage of this is it that could shift consumption away from fossil fuels. Although it hasn’t been implemented on the international level as yet.
We have to rethink and reevaluate the way we are handling the issue of climate change. Especially South Asia has to be more vocal & innovative in demanding its rights to compensation for loss and damages. Hopefully, Countries from this region will take COP 23 as a wake-up call and take a more organized approach in COP 24.

Home » Failure In Addressing ‘Loss And Damage’ In COP 23: A Wake-Up Call For South Asia – OpEd