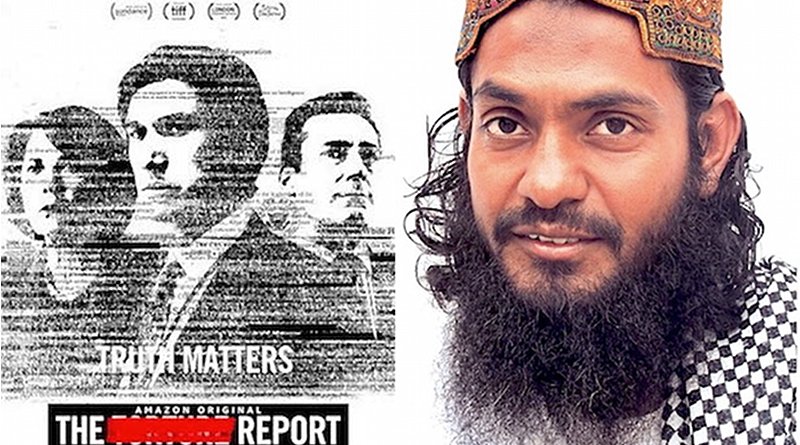 The poster for “The Report,” about the CIA torture program, and Guantánamo prisoner and former CIA “black site” prisoner Ahmed Rabbani.

Two weeks ago I published an article about the new movie “The Report” — which looks at the CIA’s post-9/11 torture program — entitled, CIA Torture Report Author Says More Than 119 Prisoners Were Held in “Black Sites” and More Than Three Were Waterboarded, in which I drew on a Vice News interview with former Senate staffer Daniel J. Jones, the lead author of the Senate Intelligence Committee’s report into the torture program, on which the film is based.

Jones — and his team — are true American heroes, having, despite considerable opposition, trawled through six million CIA documents to produce a 6,700-page report that, via its 500-page executive summary, which is all that has been publicly released, is unstinting in its denunciation of the brutality and pointlessness of the torture program. I made his comments available — and focused in particular on the troubling statistics in the article’s title — because I thought it was extremely significant that Jones concluded that there were clearly more than the 119 prisoners included in the report, because the CIA “had no idea how many people they detained,” and that more than three prisoners were subjected to waterboarding, because, as he says, “We found a picture of a waterboard at a detention site where there were no records of any waterboarding taking place, but it had clearly been used.”

“The Report” had its theatrical release on November 15, to generally enthusiastic reviews — an 83% approval rating on the movie aggregator site Rotten Tomatoes,  based on 178 reviews, with 83% approval from audiences too. Last week, I spoke about it on a US radio show, and in just three days’ time, on November 29, it will be released on Amazon Prime.

To take advantage of the increased interest in the torture program because of the film’s release, the lawyers for one of the acknowledged 119 torture victims — Ahmed Rabbani, one of around 40 “black site” prisoners to end up at Guantánamo, where he has now been held for 15 years — secured an op-ed for Rabbani in USA Today, which I’m cross-posting below, because of the uniqueness of having a “black site” prisoner’s response to the film.

Rabbani, of course, doesn’t expect to be allowed to see it, but he urges all US citizens to do so, to help to understand what happened to him and all the other men held in the US’s disgraceful global network of torture prisons in the years after 9/11.

With reference to his own case, I knew that he was seized in Karachi on September 10, 2002, and that he has always claimed that he was a case of mistaken identity — a taxi driver rather than who the US authorities thought he was: the Al-Qaeda operative Hassan Ghul. What I had missed in my reading of the unclassified summary, however, is that, just the day after his capture, the authorities realized their mistake. As a footnote in the report explained, by Sept. 11, 2002, “it was determined that an individual named Muhammad Ahmad Ghulam Rabbani, aka Abu Badr, and his driver were arrested, not Hassan Ghul.”

What I also hadn’t realized is that Rabbani knew this because, as he describes it, he “was one of the few detainees allowed to receive a copy of the heavily redacted executive summary of the report, under the rule that says a prisoner can see such unclassified material if it pertains to him.”

The US authorities later captured the real Hassan Ghul, only to spare him the kinds of torture visited on Rabbani because he was “cooperative,” and he was later released, eventually to be killed in a drone attack. Reflecting on how an Al-Qaeda operative could be released after being “cooperative,” while Rabbani himself, a nobody, is still held, he was able only to conclude, with some justification, “This is not ineptitude — it is insanity.”

Rabbani also explained how the unclassified summary revealed to him that, of the 119 men acknowledged to have been held in “black sites,” he was “one of 17 prisoners whose torture happened ‘without the approval’ of the CIA,” an admission that led him to ask, “Is it a better, or uglier, reflection on the CIA if torture was authorized? And was the CIA officer who tortured me without permission punished for it, or was he possibly promoted for his patriotic labors?”

The only point at which I think Rabbani’s criticism is misguided is when he chastises Jones and his team for not having spoken to him and other “black site” prisoners. “There is no explanation why Daniel Jones only reviewed CIA documents and never spoke to us, the victims of torture,” Rabbani states, but the truth is that the report’s remit only involved CIA documents, and, in any case, even if Jones had tried to interview Rabbani, he would have been forbidden to do so. In the nearly 18 years of Guantánamo’s existence, access to the prisoners has been so severely restricted that, outside of the ICRC, the men’s lawyers and, on a handful of occasions, independent US mental health and medical experts, no one has been allowed to talk to them except the US military and representatives of the intelligence services. Several United Nations Rapporteurs on Torture, for example, have persistently asked to be allowed to visit the prison and to talk to prisoners in an unsupervised manner, but these requests have always been turned down.

Ahmed Rabbani’s article is below. I hope you have time to read it, and that you’ll share via if you find it useful. And don’t forget to watch “The Report”!

Guantánamo Bay detainee: I lived through CIA torture. Everyone else can catch the movie.

I will likely never be allowed to see “The Report.” In the movie, Adam Driver plays Daniel J. Jones, the staffer for Sen. Dianne Feinstein who spent several years putting together a 6,700 page Senate committee report on the CIA’s use of torture in the wake of 9/11.

The censors will not likely let the movie reach my detention center at Guantánamo Bay, Cuba.

My lawyers have told me about it. As it happens, I was one of the few detainees allowed to receive a copy of the heavily redacted executive summary of the report, under the rule that says a prisoner can see such unclassified material if it pertains to him. My name appears multiple times in the report. For a nobody taxi driver from Karachi, Pakistan, that is a regrettable claim to fame.

It is interesting to hear about the film, and I am glad Amazon had the courage to make it [actually, Amazon is the distributor; the film was made by VICE Studios and three partners]. On the other hand, there are some omissions that make me sad. There is no explanation why Daniel Jones only reviewed CIA documents and never spoke to us, the victims of torture. I cannot think of another inquiry like it. Imagine that inquests into genocide in Rwanda or the former Yugoslavia took place hearing only from the murderers but not from those who suffered, or their families?

If Jones had asked, I would have told him that his footnote 595 — where the CIA asserts that I only suffered “forced standing, attention grasps and cold temperatures” in the dark prison in Afghanistan — was a cruel joke.

I would have described the week I spent in a dark pit hanging by my wrists, forever on tiptoes, while my shoulders gradually dislocated — what the Spanish Inquisition used to call “strappado.” I would have mentioned the ear-splitting noise blasted at me round the clock and the beatings every time I began to sleep.

My name appears in a table of 119 people subjected to the CIA’s “enhanced interrogation techniques.” Does anyone believe that these “EITs” were not torture? If so, they should try it sometime.

I am also one of 17 prisoners whose torture happened “without the approval” of the CIA. Is it a better, or uglier, reflection on the CIA if torture was authorized? And was the CIA officer who tortured me without permission punished for it, or was he possibly promoted for his patriotic labors?

Some elements of my torture I have long known — I was there — but I did learn some important facts from the executive summary. The Pakistani authorities arrested me and turned me over to the United States, saying I was terrorist Hassan Ghul. I denied this from day one of my detention, Sept. 10, 2002.

At the time, the CIA officers seemed sure I was Ghul — they interrogated me about it endlessly. Apparently, they were less credulous than I thought. On page 325, I read that by Sept. 11, 2002, “it was determined that an individual named Muhammad Ahmad Ghulam Rabbani, aka Abu Badr, and his driver were arrested, not Hassan Ghul.”

In other words, they knew they had made a mistake within a day. More than 6,200 days later, they still keep me detained.

Showing a taste of the truth

At one point, they actually captured Hassan Ghul. In January 2004, after I had spent over a year in detention, he was brought to the dark prison called Detention Site Cobalt, but he was found to be “cooperative” and so was there for only two days and was initially not subjected to any EITs.

Ghul was later released back to Pakistan, free to resume his wicked ways, but a U.S. drone finally killed him in 2012.

I, meanwhile, was sent to Guantánamo Bay in September 2004 to become a forever prisoner — held without trial for 17 years and counting.

The cynic in me wonders how Ghul could be seen as “cooperative” while I was not. This is not ineptitude — it is insanity.

My lawyers tell me that I only appear in the film as a picture on the wall of the secure facility in the CIA basement where Jones toiled for so long. I am sorry that I am unlikely to see it for myself, but I would like to thank those who made it, as well as the real Daniel Jones.

Nothing can change what happened to me, as that is in the past. I do want the world to know about the torture we suffered at the hands of CIA officers, though, because if we do not learn from history we will be doomed to repeat our mistakes — and I would hate for anyone else to endure what I have had to endure. For now, I encourage everyone to watch “The Report,” to get just a taste of the truth.