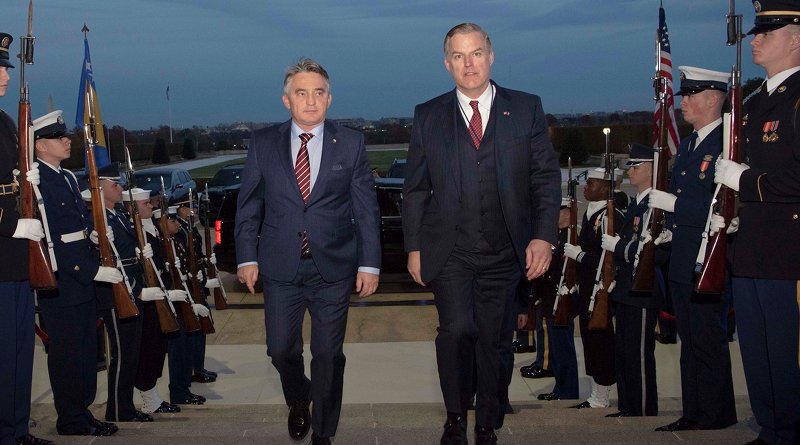 The chairman of Bosnia’s tripartite presidency, Zeljko Komsic, and James Anderson, who is performing the duties of deputy undersecretary of defense for policy, met Tuesday at the Pentagon as part of Komsic’s first official visit to the U.S. as head of state since his election last year.

Since Bosnia-Herzegovina achieved independence in 1992, the U.S., allies and partners have strengthened their ties with the nation to ensure mutual security and peace in the region, a defense official said.

In 1995, the U.S. facilitated the signature of the Dayton Peace Accords to end the Bosnian war with a NATO-led Stabilization Force to guarantee peace, the defense official said.

In 2004, the European Union-led Operation Althea took over that responsibility from NATO. The Dayton Accords remain the central tenet of Bosnia’s security.

The U.S. supported the creation of the Bosnian armed forces in 2005, which was the nation’s first unified, ethnically-integrated force.

In 2006, Bosnia-Herzegovina began a program of defense reforms and joined the NATO Partnership for Peace. Since then, the country has increased its cooperation with the U.S., allies and partners.

U.S.-Bosnian security cooperation programs build Bosnia’s capacity to counter malign influence, terrorism and narcotics trafficking. Over the past four years, more than 275 Bosnian military personnel have studied or participated in exchanges in the U.S. as part of the Defense Department’s International Military Education and Training Program.

In 2003, the Bosnian military officially partnered with the Maryland National Guard through the State Partnership Program.

The U.S. also supports Bosnia’s efforts to transition away from Soviet-era defense equipment through foreign military financing and the execution of nationally-funded foreign military sales.

Bosnia-Herzegovina has deployed about 1,000 troops to Iraq and Afghanistan since 2005 and has 68 people deployed to support Afghan forces as part of the Resolute Support Mission.

In 2020, Bosnia-Herzegovina will chair the U.S.-Adriatic Charter meeting.

The charter is a regional association consisting of Albania, Croatia, Bosnia-Herzegovina, Montenegro, North Macedonia and the U.S.

Bosnia-Herzegovina joined the charter in 2008, partnering with the participants to increase multilateral cooperation on regional security issues of mutual concern.