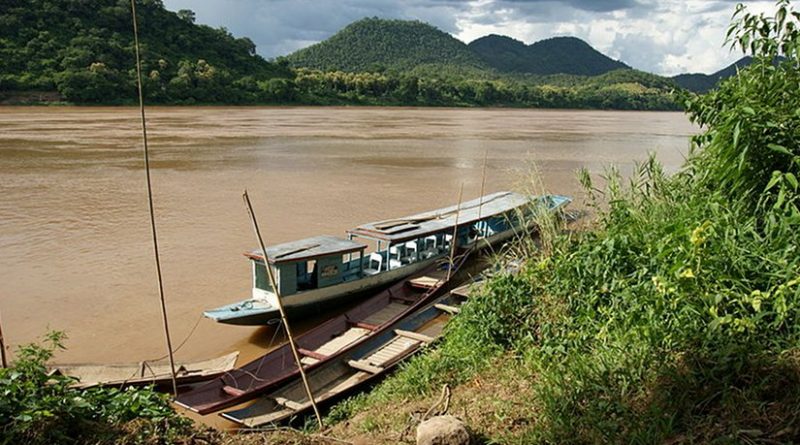 The Mekong in Laos. Photo by Allie Caulfield, Wikipedia Commons.

The swirling currents of the once mighty Mekong, shrunk by drought and increasingly crippled by dams point towards an unprecedented crisis of water governance along the more than 4,900 kilometers of southeast Asia’s longest river.

“This is the worst ecological disaster in history of the Mekong,” declared Chainarong Setthachua, natural resources expert at Thailand’s Maha Sarakham University. “It should be a massive wakeup call for policymakers and leaders of the region.” After the July drought and the lowest water levels in more than a hundred years, water levels have still not recovered. “The water in the Mekong River has fallen to a critical level. Sand islands are now exposed along many sections of the waterway,” the Bangkok Post reported in October.

The Mekong has long enchanted explorers, travelers and researchers. In more recent times, it has become the focus of commercial interests dominated by the exploitation of hydropower and sand mining. China embarked on a massive dam program with 11 dams already operating on the Upper Mekong. A recent study, published in Nature, documented “unprecedented changes due to the recent acceleration in large-scale dam construction.” While Chinese hydropower expansion attracts most attention, Thailand has also played a role in building dams and the Lao government is currently celebrating completion of the huge 1285-megawatt Xayaburi.

Proliferating dams trap the sediment essential to the delta’s healthy survival. Inadequate water flow and loss of layers of nutrient-rich sediment that historically traveled downstream, combined with increasingly extreme weather and seawater steadily pushing inland, cause the delta to sink. The sinking is worsened by increasing extraction of groundwater to meet irrigation needs of Vietnam’s rice basket. Wetlands expert Nguyen Thu Thien predicts dire consequences, suggesting hydropower could instigate regional instability: “Vietnam could lose the delta as its rice-bowl by 2050. Impoverished millions will be forced to flee, if all the dams go ahead.” Of course, forced migration will cause destabilization.

As if this was not enough of a worry, latest analysis of satellite data predict disappearance of the Mekong Delta under rising seas. Bruce Shoemaker, author of Dead in the Water, which examines the Nam Theun 2 dam in Laos, explains the scientific consensus is that costs outweigh benefits and the project represents “complete failure of water governance in Mekong region.”

More than 40 dams have been installed in the Laos area of the Mekong, with eight more planned after Xayaburi, including one 30 kilometers from the world heritage site of Luang Prabang. The country, the poorest of the four member states of the Mekong River Commission with GDP per capita of about $2,500 per year, insists that hydropower is necessary to reduce poverty. Economists warn that such huge infrastructure projects relying on foreign investment could drown such developing economies in debt, not to mention mass displacement of untold thousands of villagers and loss of livelihoods.

State-controlled media in the communist state of Laos hailed dam construction as a success story until the July 2018 Attapeu dam disaster. The collapse of Korean-Thai construction in southern Laos unleashed a wall of water that killed about 70 people and displaced 7,000 villagers. The prime minister promised to suspend dam construction pending a review of the Attapeu collapse, but improved safety regulations, construction standards and environment impact studies did not materialize. The Xayaburi dam proceeded as planned.

The Mekong River Commission was set up in 1995 to promote a “river of peace, friendship and international cooperation” among Laos, Cambodia Thailand and Vietnam. China and Myanmar are dialogue partners. Chinese hydropower accounts for about half of dam projects in Laos, but there is little hope of persuading China to halt the construction. The consultative body has no regulatory powers and fragile unity fell apart at the first test – the Xayaburi dam.

The Xayaburi dam was not driven by China but Thailand’s commitment to buy 95 percent of the electricity. Analysts regard Thailand’s energy demand from Laos as the key driver of dam-building, according to DBS Asia Insights 2017 forecasts. Cambodia and Vietnam opposed the massive Thai-Laos project, and the commission deadlocked. The consultation process allowed communities and NGOs to express opposition, but the dam proceeded as planned.

The Mekong delta is under siege from multiple threats, both natural and man-made disasters, and the country is ranked among the top 10 most vulnerable to climate change. Wetlands specialist Nguyen Thu Thien warns that while climate change and sea-level rise have gradual impacts, dam construction brings abrupt and irreversible change.

International aid focuses on the impacts of climate change, but hydropower is the awkward elephant in the room that the international community declines to address. Mekong researchers suggest that the four countries need international support to not only adapt to climate change, but also address the consequences of dam construction. The United States, Japan, Australia and the European Union are increasing aid for the region, providing hundreds of millions of dollars in technical assistance rather than supporting direct curbs on hydropower.

Brian Eyler, director of the Southeast Asia program at the Stimson Foundation, suggests that dams being built now could be obsolete before completion. The path to averting the slow death of the mighty Mekong cannot be based on technical assistance alone, but requires a holistic mixture of diplomatic pressure and aid. The first step would be to push Laos to phase out hydropower and adopt solar and other forms of renewable energy, already highly competitive and faster to install.

Academics, NGOs and scientists urge the international community and the Mekong River Commission to change course away from the tired mantra of sustainable hydropower that has failed to protect the ecosystem – and instead embrace a major policy shift towards dam suspension and a moratorium. The first recommendation for a complete moratorium on dams for the Mekong was made in October 2010.

The stakes are high as the Mekong and Thien contends if the eight dams in the Lao pipeline proceed, millions will be displaced with “a serious regional non-traditional security issue in the making. Many Southeast Asians fear the river may never recover from its current plight, though Thai academic Settachua insists, “It is not too late to protect this river and stop all the scheduled dam projects in the pipeline.”

That requires the United Nations and the international community tackling unregulated hydropower and providing more sustainable development models for the Mekong, endorsing the rights of local communities, protecting the river’s heritage and exploring prospects for revitalization in the years to come.

*Tom Fawthrop, a journalist and filmmaker, has reported on dam controversies and water resource conflicts on the Mekong for the Guardian, the Economist and The New Internationalist for more than a decade. He directed the documentary Killing the Mekong Dam by Dam, a Eureka Films production.