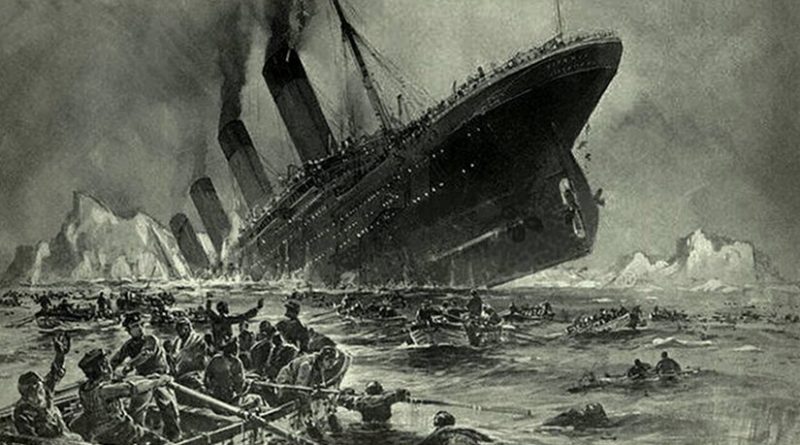 Untergang der Titanic ("Sinking of the Titanic") by Willy Stöwer, 1912

When the Titanic began to sink on April 15, 1912, Father Thomas Byles had two opportunities to board a lifeboat.

But he forewent those opportunities, according to passengers aboard the sinking ocean liner, in order to hear confessions and offer consolation and prayers with those who were trapped aboard.

Now, a priest at the former church of Fr. Byles in England is asking that his beatification cause be opened.

Some 1,500 people died when the Titanic hit an iceberg and sank in the Atlantic Ocean in 1912. Believed at the time to be “unsinkable,” the ship lacked adequate lifeboats for all the passengers on its maiden voyage from Southampton to New York City.

Fr. Byles was traveling on the Titanic to preside at his brother’s wedding in New York. The 42-year-old British priest had been ordained in Rome 10 years prior and had served as a parish priest at Saint Helen’s Church in Essex since 1905.

Miss Agnes McCoy, a third class passenger and survivor of the Titanic, said Fr. Byles had been on the ship, hearing confessions, praying with passengers and giving his blessing as the vessel sank.

McCoy’s testimony, and that of other passengers onboard, has been collected at www.fatherbyles.com.

“When the crash came we were thrown from our berths … We saw before us, coming down the passageway, with his hand uplifted, Father Byles,” she recalled. “We knew him because he had visited us several times on board and celebrated Mass for us that very morning.”

“’Be calm, my good people,’ he said, and then he went about the steerage giving absolution and blessings…”

Mocklare continued: “A few around us became very excited and then it was that the priest again raised his hand and instantly they were calm once more. The passengers were immediately impressed by the absolute self-control of the priest.”

She recounted that a sailor “warned the priest of his danger and begged him to board a boat.” Although the sailor was anxious to help him, the priest twice refused to leave.

“Fr. Byles could have been saved, but he would not leave while one (passenger) was left and the sailor’s entreaties were not heeded,” Mocklare recounted. “After I got in the boat, which was the last one to leave, and we were slowly going further away from the ship, I could hear distinctly the voice of the priest and the responses to his prayers.”

More than a century later, Father Graham Smith – the current priest at Fr. Byles’ former parish of Saint Helen’s – is the promoter for opening his cause for beatification.

In a statement to the BBC, Fr. Smith announced the beginning of the process seeking the canonization of his predecessor, whom he considers to be “an extraordinary man who gave his life for others.”

Fr. Smith said that in the local community, “We are hoping and praying that he will be recognized as one of the saints within our canon.”

The canonization process first requires that the person in question be found to have lived the Christian virtues to a heroic degree. A miracle attributed to the intercession of the individual must then be approved, for the title of “Blessed” to be bestowed.

Once beatified, another miracle due to the intercession of Fr. Byles would need to be approved, for him to be declared a saint.

“We hope people around the world will pray to him if they are in need and, if a miracle occurs, then beatification and then canonization can go forward,” Fr. Smith said.

Home » Priest Who Died On Titanic Could Be Named A Saint