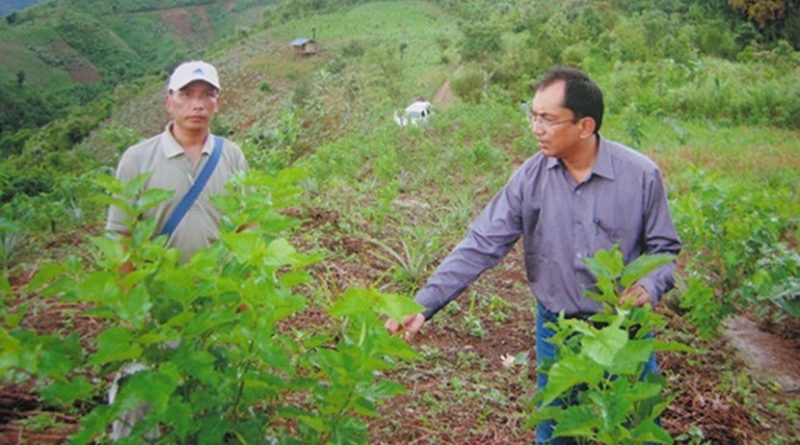 Nagaland, Meghalaya and Mizoram have been projected to become Endi,Tassar, Mulberry and Muga silk producer in the Northeastern region of India. Until a few years back Muga was exclusive and unique to neighboring state of Assam. The high altitude of Mizoram, Nagaland and other Himalayan States showed promising results for Muga silkworm rearing. Muga and other silkworm varieties are now being reared on a big scale under NERTPS, a Central Government funding scheme.While few other neighboring states start to produce different silk, Muga finds its best abode in Mizoram.

Around 60,000 families are engaged in the muga silk industry in Assam. Fortunately, a little amount of Muga silk is also produced in Meghalaya, Arunachal Pradesh, Manipur, and Nagaland. Until the last century only Assam was famous for its various species of silkworms and wild silkworms.

The decline of Som and Soalo plantation areas in Assam have decreased in Asssam. Muga worm feed on leaves of these trees. It is one of the reasons pushing Muga silk towards the verge of extinction due to expansion of tea gardens using rampant pesticides and insecticides.

Pesticides and insecticides used in small and big tea gardens had been a threat to silk as silkworms are very sensitive to silkworms. Muga rearing has already been extinct in south bank of Upper Assam and tea gardens are mostly responsible for it. There are 106 government Muga farms in Assam and most of them have been encroached and effected by air pollution and vagaries of weather. These effects led to decreasing food availability and outdoor rearing of Muga silkworm.

Silk is also a source for novel biomaterials that have applications in skincare, tissue engineering and the like. Despite acquisition of a Geographical Indication tag, this silkworm and the associated industry remains vulnerable. But climate change brings opportunity to Mizoram. For one, the insect’s habitat preferences are restricted to northeast India, adding to its vulnerability. On the other hand, Mizoram aims at weaning away the devastating Jhum Cultivation by establishing sericulture farming in the private sector too, which is permanent and suitable occupation for the rural poor and useful tool to combat global warming as it is environment friendly.
Assam has been producing far behind the expected target.

In the last decades of the century its neighboring states had started to cultivate trees for food of silkworm, silk rearing and silk production. Despite all efforts, Assam has not been succeeded to reach the production target of Muga production and as a result of it a pilot study was conducted in 2012 and 2013 in Mizoram.

Silk rearing in Mizoram is most suitable in summer now. But lowest temperature may not be helpful Muga rearing in winter. Mercury in Aizawl dipped to a record low of 3.2 degrees Celsius in 2016, making it the coldest day in the state ever since the MeT office was setup in the region. There are 176 sericulture village in the state. Most of the sericulture villages belong to Aizawl, Champhai and Kolasib districts.

Mizoram becomes most promising next home of Assam’s exclusive Muga heritage. Assam has not been succeeded to to reach the production target of Muga production as the government fails to prevent increasing air pollution. Since, a pilot study was conducted in 2012 and 2013 in Mizoram. The topography of Mizoram enjoys varied climate conditions which facilities the successful introduction of all the four silk rearing namely Mulberry, Eri, Mua and Tasar (Toss). The production of raw silk during 2015-16 is around 55.06 ton.

According to Bidyut Nath Chawdhury, the Senior Scientist in Mizoram, “the ideal temperature for rearing silkworm ranges between 24 to 32°C, with a humidity level between 80 and 85 per cent, an increase in temperature in the last few years has been affecting the production. Mizoram acquired this conductive temperature and humidity as highest temperature has exceeded 32 degree in summer. As Assam is loosing its heritage, Mizoram has lapped up the opportunity accepting it as blessings of climate change.”

The last stage of Muga worm is called Moth (like butterfly). “One moth lay 1 DFL eggg in one time and a DFL contain 20,300 eggs. In 2015/16 the state produced 6.9 lakh cocoon and 0.116 MT rawsilk was manufactured from these cocoon. At present 275 farmers or at least 200 families are involved in the rearing”, said Chaudhury, the senior scientist of the Sericulture Department.

The boom in sericulture farming is clearly indicated by the fact that more than 3000 families have planted mulberry cuttings against the target of 500 families, they pointed out adding more than two lakh silkworm seeds, 45 metric tonnes cocoon and four metric tonne of raw silk were produced during 2006. More than 500 acres of land had been brought under sericulture farming and 20 lakh mulberry cuttings were distributed to the farmers in the state. To ensure high quality yield, 550 farmers were given training in sericulture farming, they pointed out. The special SGSY mulberry development scheme, implemented in the three autonomous district councils, have shown encouraging results and about 400 kgs of cocoon had been produced from trial rearing at Lawngtlai district.

Production of seeds is 11.38 lakh DFLs (2010-12) and production and production of cocoon is 525.44 MT (2015-16). Cocoon production has gone up by 40%. Officials say that infrastuctural facilities lke rearing house, grainage house have been constructed.

On account of these, capacity for production of 11 lakh dfl per year has been created.
It must be recalled, in 2009-10, production of seed was below 5% of the demand. Self sufficiency in seed production has been achieved by 2013-14 i.e. 8 lakh dfls per year. Demands for about 3000 silkworm growers has also been met.

The highest forest cover state status in the country belong to Mizoram. But climate change has not spared this hilly north eastern state. The daily average increase in temperature during January was estimated at 0.026 degrees celsius. The State Climate Change Cell was established last year under National Mission for Sustaining Himalayan Eco-system Project. The Department of the state is having one reeling factory at Zamabawk. Apart from production raw silk and silk fabrics it has also been producing silk quilts in abundance which has marketing potential everywhere in the country. The state has groomed total 241 technical staff and out of that number 88 are Ministerial.

Now, Mizoram state is one of the most promising states for development of Sericulture in North East India where all four varities of silk producing food plants are grown and silkworms are reared for silk production. Mizoram was part of the state of Assam when India became independent. It became a Union Territory in 1972 and the 23rd state of the Indian Union in 1987. It is to be recalled, Muga was introduced in Mizoram by Prafulla Kumar Handique originally from Borpothar, Golaghat District, Assam four decades back. As an Government officer of then Luchai District, he drove three days and three nights and reached the capital city. He is regarded as the father of Muga culture in Mizoram.

The state has limited plain area and despite its limitation it has an area of 1520 acre cultivation to feed and rear Muga worm. Soom and Soalu are planted here especially for Muga. In order to enhance income of beneficieries, cocoon van was purchased and supply of cocoon at village gate has started from 2014-15. More than two thousand families have been benifited by the Sericulture Department in Mizoram and distric-phase number of beneficieries under Sericulture Depertment are 755, 365, 165, 328, 194, 208, 63, 117 in Aizawl (capital city and district), Lunglai, Saiha, Champhai, Kolasib, Sarchhip, Lwngtlai and Mamit respectively. The total number of families is 2195.

There are high demand of Muga in Assam. But the production in Assam that state production overage 100 MT per year can not fll the gap. Mizoram sale its produced yarn to other states and Assam buys most of its yarn. Under NERTPS, the Mizoram Sericulture department is implementing two major projects – integrated sericulture development project at a financial outlay of Rs 3,249.2 lakh, targeting 600 beneficiaries and intensive bivoltine sericulture development project at an outlay of Rs 3,014.16 lakh, targeting 1,000 beneficiaries. Sericulture department of the State Government is having one reeling factory at Zamabawk.

Mizoram has the highest forest cover in the country, climate change has not spared this hilly tiny north eastern state. The daily average increase in temperature during January was estimated at 0.026 degrees Celsius. It is appreciable that 10 Mulberry farms, 3 Muga seed farms, 2 Eri seed farms, 1 Oak Tasar seed farms, 1 Basic Mulberry seed farm, 2 commercial Grainage Centers and a reeling factory has been set up in the state with its continuous efforts of four decades in the field of sericulture. Mizoram has a total silk food plantation area of 5293 hectares which covers 5054 farmers. Moreover, 176 villages have been practicing silk rearing and weaving. There are around two thousand farmers under NLUP in the state.

As Assam’s Muga silk production has taken a hit due to increased temperature and incessant and unpredictable rainfall, the environment of hilly Mizoram at high altitude becomes suitable for Muga. While the ideal temperature for rearing silkworm ranges between 24 to 32°C, with humidity level between 80 and 85 per cent and Mizoram receive this conditions in average. C Rokhuma, who has been observing temperature and rainfall pattern since 1991, was also of the opinion that Aizawl, known for its moderate climate, is getting hotter every year. According to Rokhuma, the temperature here had already increased by 2.7 degrees, whereas scientists had predicted that the global temperature would increase from 0.6 degrees to 2.5 degrees in 50 years.

Sericulture is an agro-based industry. It involves rearing of silkworms for the production of raw silk, which is the yarn obtained out of cocoons spun by certain species of worms. The major activities of sericulture comprises of food-plant cultivation to feed the silkworms which spin silk cocoons and reeling the cocoons for unwinding the silk filament for value added benefits such as processing and weaving.

“Mizoram emerges as new habitat of Muga. The topography of Mizoram enjoys varied climate conditions which facilities the successful introduction of all these four silkworm races namely, Mulberry, Eri, Muga and Tasar. The production of raw silk during 2015-2016 is 58.06 tonnes’, said Mr.Mawia, the Director of Sericulture.

Silk cultivation and rearing contributes the upliftment of the rural economy in the Mizoram. It has generated direct and indirect gainful employment. Lal Thanhawla, the Chief Minister of the state, urged the farmers to make optimum use of government schemes and make Mizoram a new destination for those looking to buy muga silk. The state government’s New Land Use Policy has provided financial and technical support to a large section of sericulture farmers. Claiming that global warming can prove to be a blessing in disguise for sericulture farmers of Mizoram, Lal Thanhawla said.

Lal Thanhawla said that global warming and climate change are not merely academic discourses but real challenges that affect long-term survival. He urged the farmers to make the maximum use of NERTPS and make Mizoram a new producer of silk. Global warming could be a blessing in disguise for sericulture farmers of Mizoram, he said.
Of course, the suceess of Mizoram opens a way to conserve the species going towards extinction in Assam due to fluctuating temperature attributed to mostly air pollution.

*Chandan Kumar Duarah is a former Robert Bosch Fellow, an environmentalist and Guwahati based journalist.