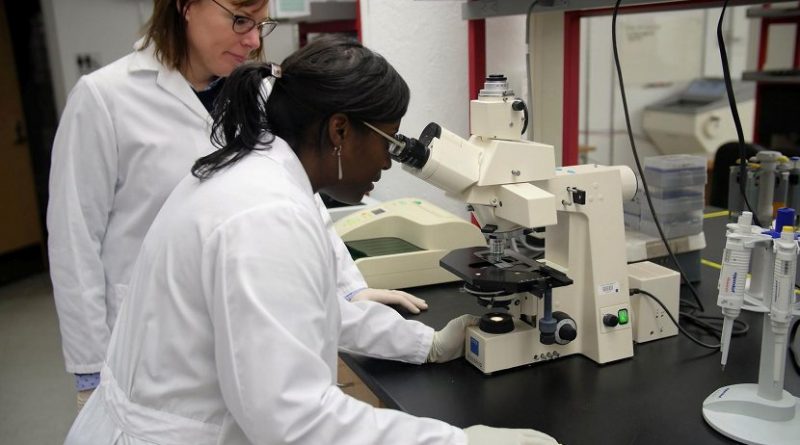 Tufts University neuroscientists Jamie Maguire (left) and Laverne Melón have generated a novel preclinical model of postpartum depression and demonstrated involvement of the neuroendocrine system that mediates physiological response to stress, called the hypothalamic-pituitary-adrenal (HPA) axis, which is normally suppressed during and after pregnancy. The findings in mice provide the first empirical evidence that disruption of this system engenders behaviors that mimic postpartum depression in humans. The study appears in the journal Psychoneuroendocrinology. Credit: Anna Derian for Tufts University

Postpartum depression strikes nearly one in five new mothers, who may experience anxiety, severe fatigue, inability to bond with their children and suicidal thoughts. Such depression has also been associated with infants’ developmental difficulties. Although stress has been identified as a significant risk factor for postpartum depression, this complex disorder is still poorly understood. Now neuroscientists at Tufts University School of Medicine have generated a novel preclinical model of postpartum depression and demonstrated involvement of the neuroendocrine system that mediates physiological response to stress, called the hypothalamic-pituitary-adrenal (HPA) axis, which is normally suppressed during and after pregnancy. The findings in mice provide the first empirical evidence that disruption of this system engenders behaviors that mimic postpartum depression in humans.

This study, to be published in the journal Psychoneuroendocrinology and now available online, provides a much-needed research model for further investigation into the causes of and treatment for postpartum depression, which has largely relied on correlational studies in humans because of the scarcity of animal models.

Stress is known to activate the HPA axis, which triggers the fight or flight response seen in many species. During and after pregnancy such activation is normally blunted – helping to insulate developing offspring from stress – and dysregulation of the HPA axis has been suggested as playing a role in the physiology of postpartum depression.

The effects of stress on postpartum behavior are thought to be mediated by stress hormones because animal experiments show that stress and exogenous stress hormones can induce abnormal postpartum behaviors. However, clinical data on stress hormones in women with postpartum depression has been inconsistent. To date, research has not directly demonstrated a role for corticotropin-releasing hormone (CRH) — the main driver of the stress response, which is primarily secreted by a cluster of neurons in the hypothalamus called the paraventricular nucleus (PVN) — or for inappropriate activation of the HPA axis in postpartum depression.

“Some clinical studies show a relationship between CRH, HPA axis function and postpartum depression, but others fail to replicate these findings. Direct investigation into this relationship has been hindered due to the lack of useful animal models of such a complex disorder,” said Jamie Maguire, Ph.D., corresponding author on the new study, assistant professor in the Department of Neuroscience at Tufts University School of Medicine, and a member of the Neuroscience and Pharmacology & Experimental Therapeutics program faculties at Tufts’ Sackler School of Graduate Biomedical Sciences.

“Using a mouse model that we developed, our new study provides the first empirical evidence supporting the clinical observations of HPA axis dysfunction in patients with postpartum depression and shows for the first time that dysregulation of the HPA axis and a specific protein in the brain, KCC2, can be enough to induce postpartum depression-like behaviors and deficits in maternal care,” she continued.

Maguire’s lab had previously shown a critical role for KCC2 in regulating CRH neurons and the physiological response to stress. The recent study investigated the specific role of KCC2 in regulating the HPA axis during and after pregnancy. Maguire and her colleagues assessed KCC2 expression in the PVN in virgin, pregnant and postpartum mice. They observed suppression (downregulation) of KCC2 in virgin mice exposed to stress but not in pregnant or postpartum mice. They propose that this contributes to the protective HPA hypofunction prior to birth, which is consistent with lower glucocorticoid levels observed in pregnant and postpartum mice and similar to findings in humans.

To further test the role of KCC2, the researchers developed mice that completely lacked KCC2 in CRH neurons and compared HPA axis function in these “knockout” mice with their normal (wildtype) littermates. Knockout mice demonstrated significantly more stress reactivity during the peripartum period, did not show the reduced anxiety typical of the postpartum period, and exhibited abnormal maternal care compared with postpartum wildtype mice. Utilizing novel chemogenetic strategies to specifically activate or silence the CRH neurons in the PVN, researchers were able to pinpoint these abnormal behaviors to the activity of these specific neurons, which govern the HPA axis.

Identifying molecular targets and biological markers for postpartum depression “Pregnancy obviously involves great changes to a woman’s body, but we’re only now beginning to understand the significant unseen adaptations occurring at the neurochemical and circuitry level that may be important to maintaining mental health and maternal behavior in the first few weeks to months following delivery,” said Laverne Camille Melón, Ph.D., first author on the paper and postdoctoral fellow in the Maguire laboratory. “By uncovering the role for stability of KCC2 in the regulation of CRH neurons, the postpartum stress axis, and maternal behavior, we hope we have identified a potential molecular target for the development of a new class of compounds that are more effective for women suffering from postpartum depression and anxiety.”

Melón and Maguire do not believe that HPA axis dysfunction is the only pathological mechanism at work. “Many psychiatric and neurological disorders are a constellation of symptoms and represent an unfortunate synergy of heterogeneous maladaptations. The mechanisms underlying one woman’s postpartum depression may differ from another’s,” said Melón.

The researchers hope that continued work will enable them to identify a biological marker that characterizes women who may be vulnerable to postpartum depression because of dysregulation of the stress axis, potentially leading to new treatment options.

“There is much more we need to learn,” said Maguire, “but we believe our model will be useful for testing novel therapeutic compounds for postpartum depression. Such studies could also be relevant to other conditions in which KCC2 deficits are implicated, such as epilepsy, chronic pain and autism, and to other stress and anxiety related disorders.”