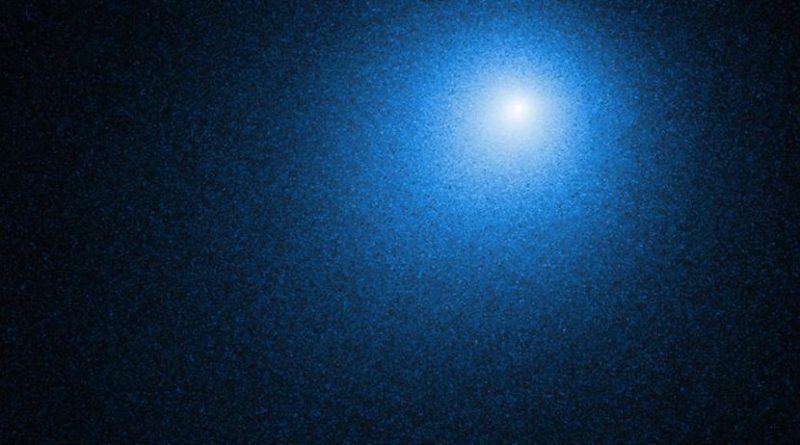 NASA's Hubble Space Telescope photographed comet 46P/Wirtanen on Dec. 13, when the comet was 7.4 million miles (12 million kilometers) from Earth. In this visible light image, the comet's nucleus is hidden in the center of a fuzzy glow from the comet's coma. The coma is a cloud of gas and dust that the comet has ejected during its pass through the inner solar system due to heating from the Sun. To make this composite image, the color blue was applied to high-resolution grayscale exposures acquired from the spacecraft's WFC3 instrument. Credit: NASA, ESA, and D. Bodewits (Auburn University), and J.-Y. Li (Planetary Science Institute)

As the brilliant comet 46P/Wirtanen streaked across the sky, NASA telescopes caught it on camera from multiple angles.

NASA’s Hubble Space Telescope photographed comet 46P/Wirtanen on Dec. 13, when the comet was 7.4 million miles (12 million kilometers) from Earth. In this visible light image, the comet’s nucleus is hidden in the center of a fuzzy glow from the comet’s coma. The coma is a cloud of gas and dust that the comet has ejected during its pass through the inner solar system due to heating from the Sun. To make this composite image, the color blue was applied to high-resolution grayscale exposures acquired from the spacecraft’s WFC3 instrument.

The inner part of a comet’s coma is normally not accessible from Earth. The close fly-by of comet 46P/Wirtanen allowed astronomers to study it in detail. They combined the unique capabilities of Hubble, NASA’s Chandra X-ray Observatory, and the Neil Gehrels Swift Observatory to study how gases are released from the nucleus, what the comet’s ices are composed of, and how gas in the coma is chemically altered by sunlight and solar radiation.

NASA’s Stratospheric Observatory for Infrared Astronomy, SOFIA, took this image of the comet on Dec. 16 and 17 when the aircraft was flying at 40,000 feet.

Comets and asteroids may be the source of Earth’s water. SOFIA is studying the chemical fingerprints of different types of hydrogen in the comet’s water, which will help us learn about the origins and history of water in the solar system — including Earth’s oceans.

The SOFIA image was taken with the telescope’s visible light guide camera, using an orange filter to indicate the intensity of light relative to other objects. SOFIA’s observations using infrared light to study the comet’s water are now under analysis.

Comet 46P/Wirtanen made its closest approach to Earth on Dec. 16, when it passed just over 7 million miles (11 million kilometers) from our planet, about 30 times farther away than the Moon. Although its close approach is valuable for making science observations from Earth, and it is the brightest comet of 2018, 46P/Wirtanen is only barely visible to the unaided eye even where the sky is very dark. It is best viewed through binoculars or a telescope.

Backyard observers can currently find the comet near the constellation Taurus though with the challenge of added light from the Moon, but it will continue to be viewable in the weeks to come. Finder charts and other information are available at the Comet Wirtanen Observing Campaign website.

Comet 46P/Wirtanen orbits the Sun once every 5.4 years, much quicker than the 75-year orbit of the more famous Comet Halley. Most of its passes through the inner solar system are much farther from Earth, making this year’s display particularly notable.

The Hubble Space Telescope is a project of international cooperation between NASA and ESA (European Space Agency). NASA’s Goddard Space Flight Center in Greenbelt, Maryland, manages the telescope. The Space Telescope Science Institute (STScI) in Baltimore, Maryland, conducts Hubble science operations. STScI is operated for NASA by the Association of Universities for Research in Astronomy, in Washington, D.C.

SOFIA is a Boeing 747SP jetliner modified to carry a 106-inch diameter telescope. It is a joint project of NASA and the German Aerospace Center, DLR. NASA’s Ames Research Center in California’s Silicon Valley manages the SOFIA program, science and mission operations in cooperation with the Universities Space Research Association headquartered in Columbia, Maryland, and the German SOFIA Institute (DSI) at the University of Stuttgart. The aircraft is maintained and operated from NASA’s Armstrong Flight Research Center Hangar 703, in Palmdale, California.