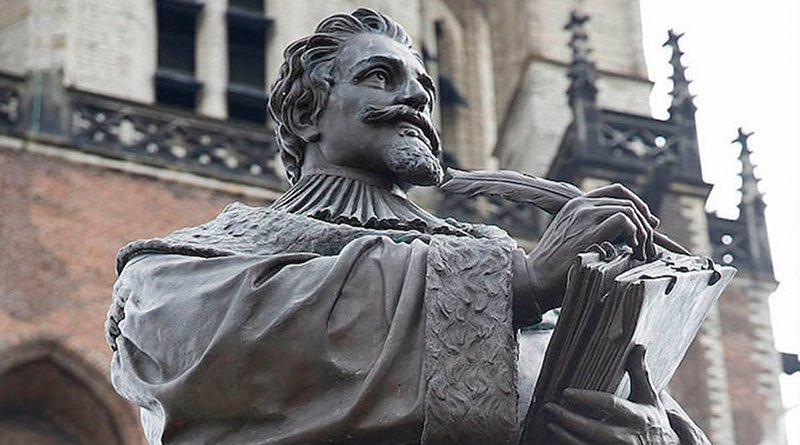 Statue of Hugo Grotius in Delft, the Netherlands. CC BY-SA 2.0

When it comes to war the world does move on for the better. Right now there are no interstate wars. The longest running civil war of our era, in the Sudan, is over. The second longest, in Afghanistan and Syria, are winding down. Only one country in the world actually threatens the use of nuclear weapons – North Korea – but its arsenal and its credibility on the issue are both small.

The world is not as benign a place as it was in the 1990s at the end of the Cold War – there are more civil wars today than there were in that immediate period, which was the all-time low, and the Cold War itself threatens to re-combust. Nevertheless, the number of soldiers killed on the battlefield continues its decline and in the principle countries of Europe, the locus of most of the wars of history, there has been no war for 74 years.

War in the early seventeenth century at the time of the great Dutch thinker, Hugo Grotius, was thought about in a totally different way as it is today. Grotius taught that war was the legitimate way in which states could enforce their rights or their side of a dispute. There was no League of Nations or United Nations to which antagonists could appeal. States had no recourse but to take the law into their own hands. Grotius upheld the morality of war and argued that it was legally applicable to disputes ranging from finance to criminal justice to territorial disputes.

Grotius built on the “just war” theory, which has its roots in the philosophy of Cicero, St Augustine and Thomas Aquinas, the latter two believing they had fashioned a concept that reflected the teachings of the Church. All of them believed that in certain cases war was just and legitimate. Grotius accepted this but went further arguing that states had the right to conquest and to right wrongs.

By the time of the eighteenth century, so accepted was Grotius’s reasoning, that war came to be seen as absolutely necessary and knights all over Europe regarded it as a right of passage. By the time of the early twentieth century and the First World War, the British war poets saw war as “glorious”, a sentiment that would have been approved by Grotius.

We owe a lot to a successful corporate lawyer in Chicago, Salmon Levinson, for the pushing aside of Grotius’s philosophy. Repelled by the carnage of the First World War he began an anti-war movement that spread fast across the Americas and Europe. He campaigned for the “outlawing of war”. War was not a legal human endeavor. Even though the League of Nations was coming into existence the concept of the illegality of war was not built into its constitution as later it was with the United Nations.

On August 27, 1928, the great powers assembled in Paris at the French foreign ministry. France’s foreign minister, Aristide Briand, declared before the assembly that that day would “mark a new date in the history of mankind” and the “end of selfish and willful warfare”. The treaty became known as the Kellogg-Briand Pact. (Kellogg was the U.S. secretary of state.) It outlawed war as a means of resolving disputes. No longer, it said, could war be “an instrument of national policy”. The Pact remains in effect to this day. Its principles were later incorporated into the United Nations.

By the light of the times the Pact was truly idealistic and revolutionary, even though it was totally ignored by the protagonists of World War 2, the Korean War, the Vietnam, Iraq and Afghanistan wars, the Indo-Pakistan and Israeli-Arab wars. In that sense the Pact was a failure.

Nevertheless, it overturned Grotius’s philosophy. From 1928 on war was deemed illegal, not a morally acceptable way of settling disputes. Economic sanctions, until then illegal, were now allowed as a substitute means of enforcement.

Overtime, despite the above wars, the concept has tricked through the mind of politicians and peoples and has contributed to the more peaceful state of the world which we inhabit in the twenty-first century. Even President Donald Trump does not trumpet the virtues of war.

In one way World War 2 made nonsense of the Pact. Yet in another it brought to the surface a struggle between two visions of the world. Although Germany had signed the Pact it obviously still believed in the legality and justice of war. For their part the successful Allies aimed to build a new structure, grounded in the illegality of war. The UN was founded. For all its failures, its Charter has laid down a norm.

At Christmas 2019 we should reflect that humanity is now formally committed to the pursuit of peace, that war is considered illegal and that the number of people killed in war has gone sharply down. Simply put: we have to keep up the good work. One of the first priorities for 2020 is to get Russia and the U.S. to renew the treaty of 2010 that cuts their intercontinental nuclear missiles by half.