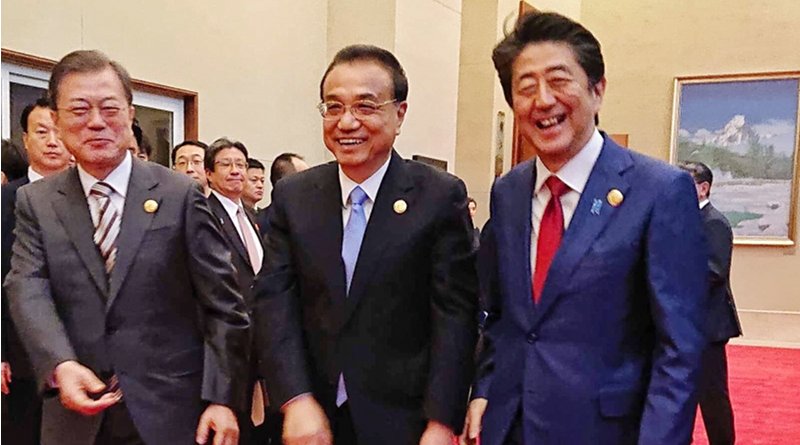 They are near neighbors and geopolitically as well as geo-economically vital for stability in northeast Asia. They are big trading nations and rank number three and number 12 in the league table of global economies, together comprising close to 8 percent of the global gross domestic product.

We are of course talking about Japan and the Republic of Korea. President Moon Jae-in and Prime Minister Shinzo Abe met for 45 minutes on the sidelines of a three-way meeting between China, South Korea and Japan in China’s southwestern city of Chengdu. The meeting may have been short.

Both summits were largely ignored by Western media because of the Christmas lull and reduced hard news let alone economic news coverage. A face-to-face bilateral meeting between Abe and Moon was nonetheless significant.

The root cause of their rift was a ruling by South Korea’s Supreme Court, which ordered some Japanese firms to give compensation payments to Koreans who had been relegated to forced labor during Japan’s colonial rule between 1910 and 1945.  Abe and his government contested the ruling in the strictest terms, arguing that the issue had been settled in the 1965 treaty on basic relations between Korea and Japan and that the ruling hence violated international law.

What ensued was a classic tit-for-tat normally associated with adversaries but not between friends and allies.

In July Japan restricted some exports (three chemicals used in the production of semiconductors) to Korea and subsequently removed the country from its “whitelist” of trusted trading partners. Korea retaliated by suspending the sharing of military information under the General Security of Military Information Agreement. These moves came against the backdrop of a trade war between the US and China and newly emboldened North Korean leader Kim Jong-un, who had returned to testing short-range missiles which constitutes a threat to both South Korea and Japan.

Abe and Moon did their best to avoid each other. The last time they had a formal bilateral meeting was during the UN’s General Assembly meeting in autumn 2018. They avoided each other during the G-20 Summit in Osaka and South Korea sent its number two, Prime Minister Lee Nak-yeon, to the enthroning of Emperor Naruhito. This was a snub because the ascent of a new emperor to the chrysanthemum throne is a once in a generation event marked by calendar years being measured in a term associated with his reign. Naruhito’s new reign is called “reiwa” which can be translated as harmonious or peaceful order.

Abe and Moon bumped into each other on the margins of an ASEAN summit in Bangkok. It was high time for the reluctant friends to meet again and patch things up. The two leaders agreed to solve the forced labor issue through dialogue. Japan agreed to drop export controls to Korea. Both will resume talks on trade and security.

While the meeting may have been short and underreported, it was significant. They have the closest of historic and cultural ties, even if they are at times fraught. They share further interests as both are trading nations who depend on a global open trading system. The last thing they needed was a mini trade war. They have every interest in appealing to world powers to keep the global trade order free and the WTO strong. They need to walk the talk in order to have credibility in this endeavor.

Their security concerns are identical. They both have issues with North Korea. While the new testing of short-range missiles may not worry US President Donald Trump, it constitutes a major security threat to both countries – which are by the way among the world’s most densely populated areas.

They both also need to come to terms with the unstoppable rise of China as an economic and military superpower. Their companies are major investors in China, which is also an important trading partner to both. They are aware of its increased status as the region’s ascending hegemon as well as of its military power. This requires them to navigate those waters carefully, which may be done more easily as allies rather than as foes.

All in all, the Abe-Moon meeting may have been a Christmas gift of sorts to northeast Asia as there are enough potential tensions in the region. It is a positive development for those two Asian powerhouses to find a way to resolve their issues.

Home » Moon-Abe Summit: A Christmas Gift To The Region – OpEd