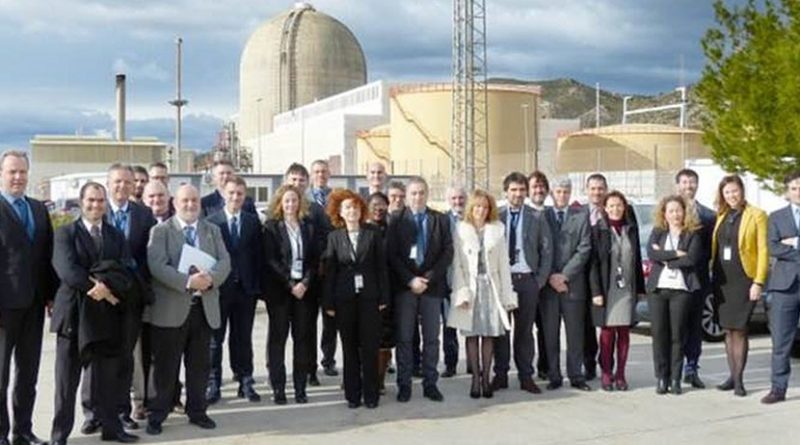 The IAEA team with plant management at Vandellós 2 (Image: ANAV)

Units 1 and 2 of the Ascó plant entered commercial operation in 1984 and 1986, respectively, while unit 2 of the Vandellós plant began commercial operation in 1988. Asociación Nuclear Ascó-Vandellós II, AIE (ANAV) – operator of the two plants – is preparing a licence renewal application to extend the operating period of the three units beyond the current 40-year licence.

A SALTO (Safety Aspects of Long Term Operation) peer review addresses strategy and key elements for the safe long-term operation (LTO) of nuclear power plants. SALTO missions complement IAEA Operational Safety Review Team (OSART) missions review programmes and activities essential to operational safety. SALTO peer reviews can be carried out at any time during the lifetime of a nuclear power plant, although according to the IAEA the most suitable time lies within the last ten years of the plant’s originally foreseen operating period. SALTO and OSART reviews are carried out at the request of the IAEA member country in which the review is to take place.

The 12-member team reviewed the plant’s preparedness, organisation and programmes related to long-term operation against IAEA safety standards. The review – which was requested by ANAV – began on 15 January and was completed on 23 January.

The IAEA team said ANAV has a good basis to effectively manage long-term operation and that the operator has demonstrated that it is implementing preparations for safe LTO in a timely manner. It said ageing management and LTO activities already meet many recommendations of IAEA safety standards.

The review team identified several good performances that will be shared with the nuclear industry globally, including well-maintained and user-friendly design basis documentation ensuring a good foundation for safe LTO. The plants also have a comprehensive strategy for identification and revalidation of time-limited ageing analyses for mechanical and civil structures and components. In addition, there is effective management of generational human resources turnover.

The mission team provided several recommendations for further enhancing LTO safety at Ascó and Vandellós, including that ANAV completely analyse and properly document the review of relevant IAEA safety standards as a basis for periodic safety reviews. The operator should also demonstrate that management of ageing of all active structures, systems and components is in place for LTO. ANAV should implement a complete management of ageing of electrical, mechanical and control components for LTO.

The team – which included experts from Argentina, Finland, France, Ireland, the Netherlands, Romania, Slovakia, South Africa and the USA as well as two IAEA staff members – provided a draft report to the plant management at the end of the mission. A final report will be submitted to the plant management, the regulatory authority and the government within three months.

The plant management said it was committed to implementing the recommendations and requested that the IAEA schedule a follow-up mission to Ascó 1 and 2 in January 2021 and at Vandellós in 2023.

José Antonio Gago, general director of ANAV, said: “This mission is important because it supports the work we have been doing in preparation for the long-term operation of Ascó and Vandellós II.”