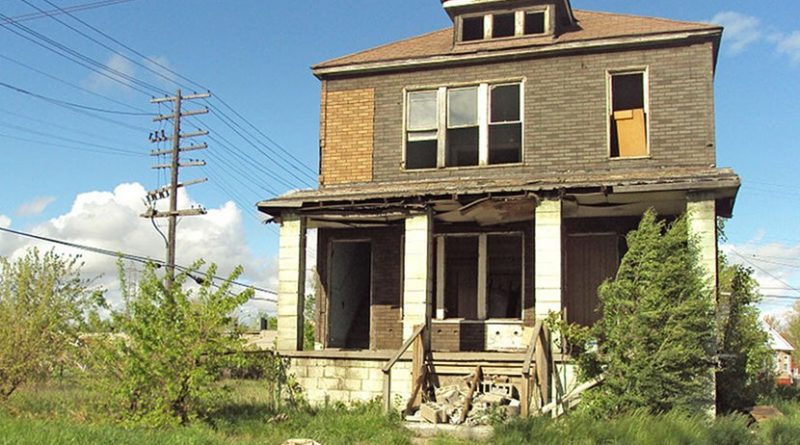 An abandoned house in the Delray neighborhood of Detroit. Photo by Notorious4life, Wikipedia Commons.

Most measures of the housing market have been showing some improvement in recent months. The pending home sales index for January had the highest reading since April of 2010, when it was fueled by a rush of people trying to beat the expiration of the first-time homebuyers tax credit. Sales in the South were especially strong, up by more than 10 percent from year-ago levels.

New and existing home sales have shown a similar upward trend. Inventories of both have fallen to a more normal range of close to six months of sales compared with the near-10 months of sales that we saw at the trough of the downturn.

However, these positive signs must be viewed with some caution. First, as a near-term issue, the monthly data are always erratic, especially in the winter months when weather can be a very important factor. The unusually mild January likely boosted sales in the Midwest and Northeast as snow and cold weather did not prevent people from home hunting this year as would ordinarily be the case.

Of course weather could not explain the uptick in the South. Nonetheless, if weather allowed for sales in January that might not have otherwise taken place, then sales may be somewhat weaker this spring since they would have been pulled forward.

More importantly, the sources of long-term drag on the housing market remain. The rate of foreclosure may be slowing some due to the improvement in the job market and an increasing willingness by lenders to allow modifications and/or refinancing, but we are still likely to see more than 900,000 foreclosures in both 2012 and 2013.

The other factor that will continue to depress both construction and house prices is the still near-record vacancy rates. The current vacancy rate is down by more than a percentage point from its peak in 2010, but it is still far higher than any vacancy rate recorded in the years preceding the housing bubble.

This huge number of empty units will not be absorbed quickly, even if the economy were to create jobs at a pace more typical for a recovery from a severe recession (300k-400k a month). While most of the vacancies are for rental units, it is important to remember that rental units can easily become ownership units (almost one-third of rental units are single family houses) if sales prices started to rise relative to rents.

The Case-Shiller 20-City Index showed that house prices fell for the sixth consecutive month, dropping by 0.5 percent in December, bringing their decline over the year to 4.0 percent. Over the last three months, prices have fallen at an even more rapid 7.5 percent annual rate.

The biggest losers for the month were Chicago, where prices fell by 1.1 percent; Atlanta, where prices dropped by 1.3 percent; and Detroit, where prices plunged 3.5 percent in December. Over the last three months, prices in Detroit fell at a 20.3 percent annual rate; although, they were still up by 0.5 percent for the year. There is clearly a lot of speculative buying in Detroit right now as investors have moved in to take advantage of low prices. This is likely to lead to more erratic price movements; although, the general direction there is likely to be higher given how far prices have already fallen.

It is worth noting that even the relatively positive news on new and existing home sales showed sharp decline in prices. The January data on existing home sales showed that the median sale price was $154,700, compared with a year-round average of $166,100. The average price in January was $201,200 compared with a year-round average of $214,000. In other words, even these seemingly positive reports are still consistent with the picture of a market where prices continue to decline.

Given the fundamentals of the market, it seems like prices will at least continue at a moderate rate of price decline well into 2012, with prices perhaps leveling off by the end of the year. Any hope of a price rebound at this point is completely unrealistic except in a few badly oversold markets.