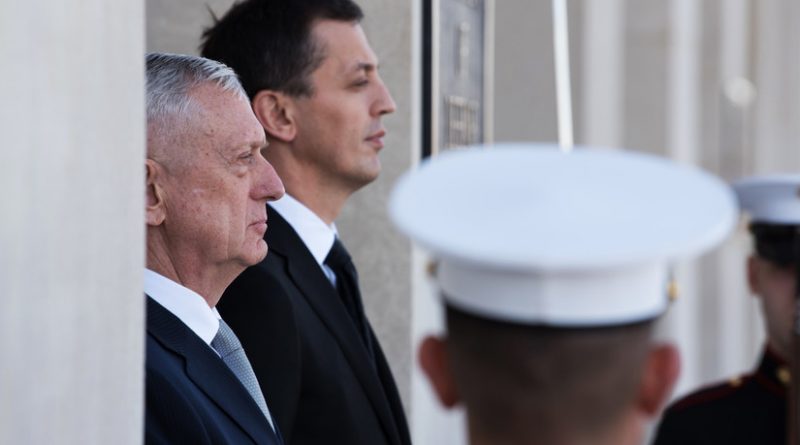 Defense Secretary James N. Mattis, left, and Defense Minister Predrag Boskovic of Montenegro stand during a welcoming ceremony before their meeting at the Pentagon, Feb. 27, 2018. DoD photo by Army Sgt. Amber I. Smith

Defense Secretary James N. Mattis on Tuesday welcomed his Montenegrin counterpart to the Pentagon for a meeting that included the signing of a general security of information agreement as evidence of increased cooperation, chief Pentagon spokesperson Dana W. White said.

In a statement summarizing the meeting, White noted that it marked the first time Defense Minister Predrag Boskovic has visited the Pentagon since Montenegro achieved full membership in the NATO alliance in June.

Mattis expressed gratitude for the support Montenegro provided in the wake of the recent grenade attack on the U.S. Embassy in the Montenegrin capital of Podgorica, White said.

“He congratulated Minister Boskovic on Montenegro’s accession as the 29th member of NATO,” she added. “He also thanked him for the strong leadership Montenegro has shown in maintaining stability in the Balkans.”

The secretary also praised the contributions Montenegro has made to the Resolute Support mission in Afghanistan, White said, and lauded the country’s plan by 2024 to meet the pledge agreed upon at NATO’s 2014 summit that member nations would devote at least 2 percent of their gross domestic product to defense spending.

‘A Community of Values’

Before the meeting, Mattis noted that during Montenegro’s NATO accession ceremony, Secretary General Jens Stoltenberg called the alliance “a community of values.”

“The United States is proud to call you our ally as we stand shoulder to shoulder alongside our fellow NATO members against common security threats,” Mattis told his Montenegrin counterpart. “It is opposed by Russia as it seeks to redraw international borders by force and seeks veto authority over European diplomatic, economic and security decisions.”