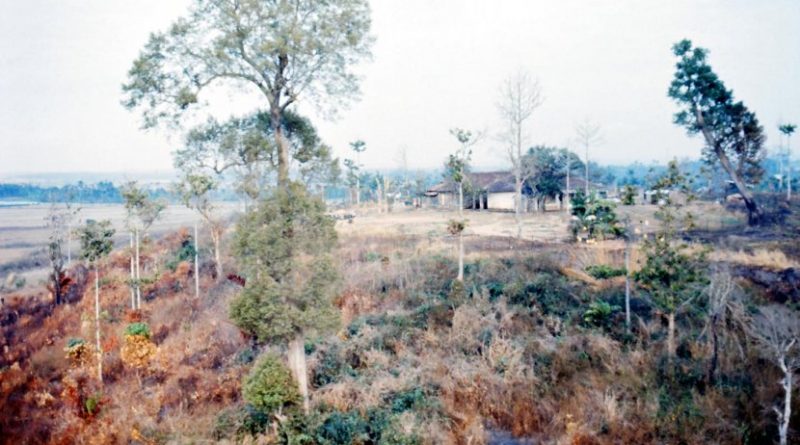 US aircraft sprayed 20 million gallons of herbicides across Vietnam during the Vietnam War. Dioxin, a contaminant in Agent Orange, persists today. Credit: Photo by US Army Flight Operations Specialist 4 John Crivello in 1969

During the Vietnam War, United States aircraft sprayed more than 20 million gallons of herbicides, including dioxin-contaminated Agent Orange, on the country’s rain forests, wetlands, and croplands. Agent Orange defoliated the thick jungle vegetation concealing Viet Cong fighters and destroyed a portion of the country’s food crops, but it was primarily the dioxin contaminant that harmed so many Vietnamese and U.S. military personnel. A new article from the University of Illinois and Iowa State University documents the environmental legacy of Agent Orange in Vietnam, including hotspots where dioxin continues to enter the food supply.

“Existing Agent Orange and dioxin research is primarily medical in nature, focusing on the details of human exposure primarily through skin contact and long-term health effects on U.S. soldiers,” says Ken Olson, professor emeritus in the Department of Natural Resources and Environmental Sciences at U of I and co-author on the article. “In this paper, we examine the short and long-term environmental effects on the Vietnamese natural resource base and how persistence of dioxin continues to affect soils, water, sediment, fish, aquatic species, the food supply, and Vietnamese health.”

Olson and co-author Lois Wright Morton of Iowa State University explain that Agent Orange was a combination of two herbicides, 2,4-D and 2,4,5-T, neither of which persist longer than a few days or weeks in the environment when exposed to sunlight. However, during production of Agent Orange, a toxic byproduct formed: dioxin TCDD, the most toxic of the dioxin family of chemicals. Once dioxin TCDD gets into the environment, Olson and Wright Morton say, it can stick around for decades or even centuries. That’s what happened in the Vietnam landscape.

The researchers examined an 870-page USAID report, as well as a dozen other research reports on Vietnam’s contaminated airbase sites, to explain dioxin TCDD’s movement and long-term fate throughout the Vietnam countryside.

“The pathway begins with the U.S. military spraying in the 1960s, absorption by tree and shrub leaves, leaf drop to the soil surface (along with some direct contact of the spray with the soil), then attachment of the dioxin TCDD to soil organic matter and clay particles of the soil,” Wright Morton says.

From there, dioxin TCDD moved offsite in surface runoff, clinging to sediment particles and settling in wetlands, marshes, rivers, lakes, and ponds. Dioxin TCDD-contaminated sediment was – and still is – ingested by bottom-feeding fish and shrimp, accumulating in fatty tissue of those animals and up the food chain into many of the fish that form the basis of the Vietnamese diet. Even though fishing is now banned from most contaminated sites, bans have been difficult to enforce and, as a result, dioxin TCDD is still entering the human food supply 50 years later.

The article maps the 10 airbase sites where dioxin TCDD levels remain at dangerous levels, noting that millions of Vietnamese live in adjacent cities and villages.

“The worst dioxin-contaminated site in Vietnam is Bien Hoa airbase, which is 30 miles north of Ho Chi Minh City,” Olson says. “After President Nixon ordered the U.S. military to stop spraying Agent Orange in 1970, this is the site where all the Agent Orange barrels remaining in Vietnam were collected. The barrels were processed and shipped to Johnston Island in the Pacific Ocean, where they were incinerated at sea in 1977.”

Based on their research, Olson and Wright Morton recommend incineration of contaminated soils and sediments at the Vietnam airbase hotspots.

“While incineration is the most expensive technology currently available, it would eliminate dioxin rather than temporarily store it in a landfill, and incineration would not require future maintenance or treatment. Incineration is one of the most commonly used technologies, having been used to treat soils at more than 150 superfund sites, and is a mature and tested technology,” the authors say.