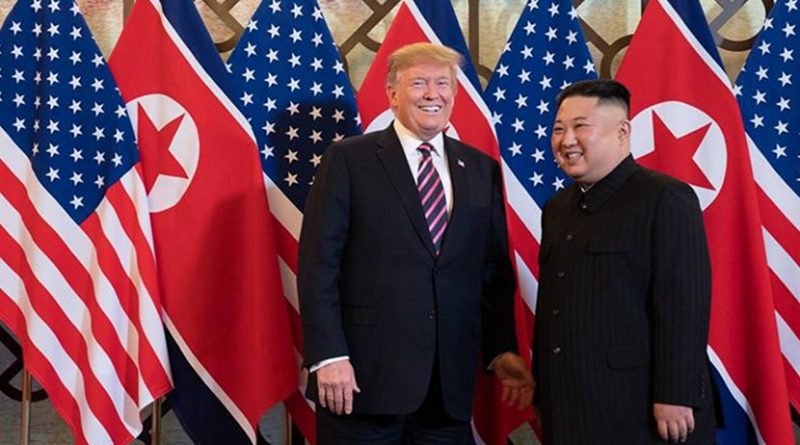 In front of a backdrop of American and North Korean flags as he shook hands with Kim Jong Un at the start of their second summit, U.S. President Donald Trump denied that he has walked back his pledge to denuclearize the Korean peninsula.

Asked by a reporter if they would declare a formal end to the Korean War, which was halted with an armistice in 1953, Trump replied: “We’ll see.”

The North Korean leader and Trump – prior to dinner — immediately went into an adjacent room at Hanoi’s Metropole Hotel for a brief meeting with only their interpreters present.

A small group of reporters, in the room for the opening moment of the discussion, heard Kim praise Trump for his “courageous decision” to begin their dialogue, which started last year in Singapore.

Trump, elaborating on comments he had made earlier in the day to their Vietnamese hosts, told Kim that North Korea has unbelievable and unlimited economic potential.

Joining Trump for the dinner were Secretary of State Mike Pompeo and acting White House chief of staff Mick Mulvaney. At the round table with Kim for the meal were Kim Yong Chol, who is vice chairman of the powerful central committee of the Workers’ Party of Korea and North Korea’s foreign minister, Ri Yong Ho.

“Our relationship is a very special relationship,” Trump said at the start of the dinner, noting the special chemistry he says exists between him and Kim. Trump later tweeted that he had “Great meetings and dinner” with the North Korean leader.

More extensive discussions between the two leaders are expected on Thursday. Trump indicated just prior to the Wednesday evening dinner that he would hold a news conference the next day to discuss the outcome of his talks with the North Korean leader.

For the second time in two days the White House press corps found its coverage affected by restrictions apparently demanded by the North Koreas.

A day ahead of the summit, the journalists accredited to the White House found themselves evicted from their press filing center at the Melia Hotel where Kim is staying. They were forced to move to an international media center run by the Vietnamese government in the Cultural Friendship Palace, joining more than 3,000 other journalists.

The White House offered no explanation for the last-minute change of venue beyond saying there were “technical issues.”

International wire service reporters, who are core members of the pooling coverage, were excluded at the last minute from observing the start of Wednesday’s Trump-Kim dinner.

Only the newspaper pooler, Vivian Salama of the Wall Street Journal, was permitted to join the photographers along with the CBS TV crew and the designated radio pool reporter from National Public Radio.

“Originally Sarah Sanders informed us that no print reporters would be allowed in due to sensitivities over shouted questions in the previous sprays. But when our photo colleagues joined us in protest, they decided to allow one print reporter in,” noted Salama in a pool report.

“Due to the sensitive nature of the meetings we have limited the pool for the dinner to a smaller group, but ensured that representation of photographers, TV, radio and print poolers are all in the room,” said White House Press Secretary Sarah Sanders. “We are continuing to negotiate aspects of this historic summit and will always work to make sure the U.S. media has as much access as possible.”

The White House Correspondents’ Association “strenuously” objected to “the capricious decision to exclude some journalists from a press encounter with President Trump and Chairman Kim.” “We call on the White House to not allow a diminution of the previously agreed-to press complement for the remainder of the summit,” said WHCA President Oliver Knox.

While some U.S. officials have attempted to lower expectations for the outcome of the second summit, Trump is under pressure to extract something beyond the vague commitment made by Kim last June in Singapore on pledging to give up his nuclear weapons and ballistic missiles in exchange for a lifting of crushing international sanctions on the impoverished country.

The Singapore summit was hailed as a historical event as Washington and Pyongyang have never had diplomatic relations. When Trump took office there were fears of a renewed war with North Korea as the U.S. president threatened to unleash “fire and fury like the world has never seen” on the northeast Asian country in response to its threats against the United States and its allies.

Director of National Intelligence Dan Coats told a congressional panel last month that North Korea “has halted its provocative behavior” by refraining from missile tests and nuclear tests for more than a year. “As well, Kim Jong Un continues to demonstrate openness to the denuclearization of the Korean Peninsula.”

Despite the end to testing, Coats cautioned that “we currently assess that North Korea will seek to retain its (weapons of mass destruction) capabilities and is unlikely to completely give up its nuclear weapons and production capabilities.”

Home » Trump Denies He Has Backtracked On North Korean Denuclearization