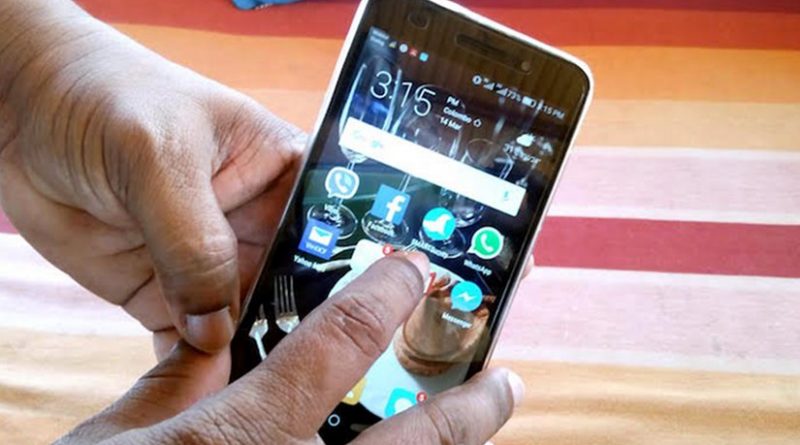 A Mobile Application developed by the Department of Wildlife Conservation of Sri Lanka government that allows anyone to report sighting of a Dugong or any other large sea animals. Credit: Stella Paul.

As the midday sun rises higher over Gulf of Mannar, a drone hovers over the blue mass of sea water. Below, a motley crowd of fishermen gathers, straining their eyes at a drone.

A few metres from the crowd, conservationist Prasanna Weerakkody operating the drone raises it to 500 metres, before moving it slowly in different directions, allowing the device to film a large swathe of water.

One day, he believes, the roving camera of this drone will send images of one of the most elusive sea mammals in this ocean: the dugong.

“Dugong usually swims at a depth of about 5-10 metres. Being mammals, they also come above water every few minutes to inhale fresh air. The drone has the capacity of rising one km high, but we usually operate it at 400-500 metres. This is enough to capture images of dugong,” says Weerakkody, whose organisation – Ocean Resources Conservation Association (ORCA) – is a partner of the four-year Global Environment Facility (GEF) funded, multi-agency environmental initiative: the Dugong and Sea Grass Conservation Project.

Saving the Ocean’s Most Vulnerable

The dugong – a manatee-like creature known locally as “sea pig” – is listed as vulnerable to extinction by the International Union for Conservation of Nature (IUCN), which is also a partner in the conservation project.

The world’s only vegetarian sea mammal, the dugong lives at a depth of 5-15 meters, feeding on sea grass. Its natural habitat is vast – stretching from Eritrea in East Africa to Vanuatu in the Pacific. However, there is no documented information on their numbers in Sri Lankan waters. Very little is also known about their behaviour and movement, such as when and how they move, which part of the sea or grass bed they frequent and why, and which seasons are the most favourable. In short, most questions that one can raise about a dugong here are unanswered.

The main reason, says Arjan Rajasurya, Project Manager at IUCN Sri Lanka, is that the dugong is a very “secretive” animal which rarely shows up. “There may be a dugong right under a boat, but you will not know of its existence because it does not jump through the water like a dolphin or squirt water like a whale,” he explains.

The secretiveness is proven by the fact that none of the officials involved in the multi-agency conservation project has ever seen a live dugong.

And yet as many as 13 dugongs are known to have been killed in the past three years, many of them reported by the local media. Sri Lanka’s National Aquatic Resources Research and Development Agency (NARA) – a marine research organisation – has also carried out autopsies on some dead dugong.

Locals – especially fishermen whose gill nets catch and kill dugongs – are also tight-lipped and seldom come forward to share information on the sea mammal, probably fearing punitive actions by the government or backlash from other fishermen.

Besides gathering missing information on the mammal and its habitat and chalk out a strategy to protect both, the 4.88 million dollar Dugong Conservation project, which took off in mid-2015, also aims to curb illegal fishing and bridge the communication and awareness gap with the locals. To help achieve this, use of a drone was decided as a crucial component, say the project partners.

Technically, a drone is an unmanned aircraft with powerful cameras that capture images below. It can be either remotely controlled or fly on its own using software such as onboard sensors and GPS. Extensively used by security forces in war zones, the drone has lately gained a reputation as a dangerous killer machine that drops bombs on people – ‘terrorists’ and civilians alike.

The most extensive – and controversial – use of drones has been in Pakistan and in the Middle East where the war against terror has been raging for years.

However, here in the deep waters of Sri Lanka, the technology is a last-mile effort to save critically endangered marine animals by monitoring their movement, studying their habitat and preventing their capture and killing by illegal fishers.

According to Weerakkody, who leads a dedicated team of marine life experts, this is probably the first time ever that drone technology is being used for marine conservation. “This is a Phantom basic pro robotic machine fitted with a camera that can shoot over 2 K video, which is almost three times as clear as the picture on your HD TV.”.

Apart from the drone, the ORCA team is using a side-scan sonar device that captures echoes from an object on the sea floor and creates its images after measuring the strength of how “loud” the return echo is.

However, this device can only work if it is placed on a moving object – such as a boat or an underwater vehicle – which produces a sound. So, if a dugong is right next to the sonar, but the solar carrier is still, the device will not be able to capture its image. Also, given that the dugong is a shy and secretive animal, it will most likely swim away when it senses a moving vehicle nearby.

While the drone and the side-scan sonar are handled by highly skilled experts like Weerakkody, the project is also designing technologies that are user-friendly and can be used by community members with little or no training.

Channa Suraweera, Project Manager at Sri Lanka’s Department of Wildlife Conservation, demonstrated one such design to IDN: an application that can be used by locals to report sighting of a dugong or any other large sea animal.

Based on Smart Survey software, the app gives multiple options for a user to report what has been seen: a dugong, a dolphin, a whale or any other sea animal. In a few seconds, with a few clicks, someone can send a text and a photograph which will be stored at a government-run server. The department will analyse this information and add this is to a database on sea mammals which is currently being built.

“As of now, we have very little data on dugong and we cannot build an entire database on our own. So we built this app to involve the general public in collecting information and sharing it with us,” said Suraweera.”It’s very easy to use and any mobile phone user with an internet connection can provide us with data. Once we have enough data, we can create a concrete plan to protect the dugong. We can also use the data to popularise tourism in the country, especially in the southern part of the ocean where whales are seen.”

Suraweera explained that he mobile app is actually a part of a larger plan to build a fully computerised marine conservation coordination centre given the current communication gap among various government agencies, locals and civil society organisations on the issue of sea mammal conservation.

Once established, the centre will help loop in each of these agencies – including the Sri Lankan Navy and Coast Guard – and providing training in the latest digital technologies developed by the department. “It will be a centre that will strengthen communication and also help create a robust digitised database on marine conservation,” Suraweera predicted.

Mekala Christopher is a young boatman in Kalpitiya who often ferries officials and tourists to the high sea to see corals and dolphins. On several occasions, Christopher has seen a drone in the sky, but he says he has “no idea what it is actually for” and that he is also unaware of the massive conservation initiative to protect sea mammals such as the dugong.

According to Suraweera, if this conservation project is to succeed, members of the local community like Christopher must have a way to extend their support to it. “This project can only create guidelines and a framework for action, but the real action can be taken only by locals. They need to take part in the information sharing system,” he says, pointing at the fishermen’s village on the shore.

Veerakkody, on the other hand, hopes that the future will see deployment of more drones with more sophisticated features. The accomplishments of the drone in the project’s first year have been satisfactory: images have revealed that the sea grass bed is largely fine, except for some sporadic damage caused by fishing trawlers. But a higher end drone with more advanced technology such as a 4k camera could help better monitor their movement and map the habitat. “Those devices could decide the course of tomorrow’s conservation,” he says confidently.