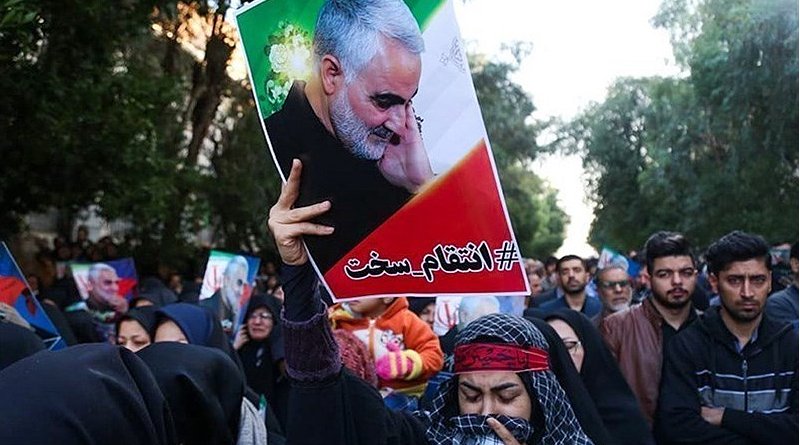 Nominally, Iraq is blessed with two strong allies – the United States and Iran.  Unfortunately the two are virtually at war with each other – virtually, because although missiles are flying in each direction, Iran is not itself firing any.  A crucial aspect of Iran’s politico-religious strategy has long been to use proxies to execute its less savory operations, thus avoiding direct responsibility for the atrocities committed at its bidding.  Among such organizations as Hezbollah in Lebanon, the Houthis in Yemen, Hamas in Gaza, and a plethora of jihadist groups in Syria, is Hashed al-Shaabi, a network of armed groups embedded in the Iraqi state.  Its most prominent member is Kataib Hezbollah (KH).

KH is an Iranian-sponsored Shia militia.  Founded in 2003, it is in sympathy with the Lebanon-based Hezbollah organization, itself a key element in Iran’s network of jihadist groups.  Since late October 2019 KH has been launching rocket attacks on bases housing US troops and diplomats in Iraq – to date no less than 23 such strikes.  On March 11, in a rare daytime attack and one of the heaviest ever, at least 33 rockets rained down on air defense units at the Taji air base, some 17 miles north-west of Baghdad.  Three people were killed and 14 injured.

The next day a retaliatory raid by US and British forces hit KH facilities across Iraq.

How did the US and Iran emerge as allies of Iraq?

The US-led coalition in Iraq, initially composed of 35 countries, dates back to 2014.  They arrived at the direct request of the Iraqi government in order to counter the apparently unstoppable advance of Islamic State, as it swallowed up vast tracts of Iraqi territory.  In addition to direct military invasion, the US-led coalition provided extensive support to the Iraqi Security Forces by way of training, intelligence, and personnel.  The US contingent currently comprises some 5,000 military personnel.

Iran’s stranglehold on the Iraqi state is the result of a carefully conceived plan to infiltrate the key elements of the nation, locking Iraq into its so-called Shia Crescent power bloc. A batch of secret intelligence cables, leaked to the media in November 2019, disclosed how Iran, while supporting the fight against Islamic State, slowly expanded its influence inside Iraq, selecting and running sources at the most senior levels of the government.  With the aim of keeping the country aligned with its own interests, Iranian intelligence officers infiltrated its military leadership and co-opted much of the Iraqi cabinet. The cables claim that Iran acquired such a grip on Iraq’s affairs that Iranian officers effectively had free rein across key institutions of state, and were central to much of the country’s decision-making.

A key role in this operation was played by the head of Iran’s powerful IRGC (Islamic Republican Guard Corps) and leader of Iran’s network of proxies across the Middle East, Qassem Soleimani – the Iranian leader adjudged so dangerous as to merit assassination on the orders of US President Donald Trump on January 3, 2020.

The killing of Soleimani was seized on by Iraq’s Iranian-infiltrated government as a cause célèbre. Iraq’s then prime minister, Adel Abdel-Mahdi, denounced it as “an act of aggression” and a “breach of sovereignty,” and engineered a vote in the Iraqi parliament demanding that foreign troops should be withdrawn from the country.  The nation as a whole, however, happened at the time to be engaged in mass popular protests directed against Iranian influence in its affairs – exemplified by Soleimani – and against the corruption and failures of the government.

By March 2020, however, the largest anti-government protest movement in Iraq’s modern history had dwindled in the face of the defection of the influential cleric, Muqtada al-Sadr, and fears over the spread of the coronavirus that Iraq’s decrepit health system has been struggling to contain.  As a result when the US responded to KH’s latest rocket onslaught with a massive but carefully targeted attack, the Iraqi government was again able to condemn it as “American aggression”.  The Iraqi president, Barham Salih, called for an investigation.

The retaliatory action consisted of air strikes on Iran-backed militia facilities in southern Iraq, including logistics and drone warehouses. “These weapons storage facilities,” ran a statement from the Pentagon, “include facilities that housed weapons used to target US and coalition troops.”  It described the strikes as “defensive, proportional, and in direct response to the threat posed by Iranian-backed Shia militia groups who continue to attack bases” that are hosting troops of the international coalition fighting Islamic State jihadists.

Britain’s foreign minister, Dominic Raab, said the strike, in which the UK participated, was “swift, decisive and proportionate…UK forces are in Iraq with coalition partners to help the country counter terrorist activity, and anyone seeking to harm them can expect a strong response.”  He urged Iraq to take stronger action to rein in the militias.

The US strike also extended to an air raid on a headquarters of the Popular Mobilization Forces (PMF) just over the border in Syria. The strike is reported to have killed 26 fighters. The PMF, an umbrella group composed of scores of Shia militias, plays a complex role in Iraqi politics. Although technically under the control of the Iraqi state, many of its commanders take their orders from Iran and the IRGC.  A senior PMF leader and head of KH, Abu Mahdi al-Muhandis, was killed alongside Soleimani.  Muhandis had been Iran’s top adviser and ally in Iraq.

With two powerful foreign entities – the US and Iran – operating against each other’s interests within a feeble and unstable regime. Iraq’s future looks bleak indeed. Neither antagonist has the appetite for all-out war, but neither is minded to yield much ground.  Continual low-level conflict would seem to be the fate reserved for Iraq for the foreseeable future.

Home » Open Conflict: The US Versus Iran’s Proxies – OpEd