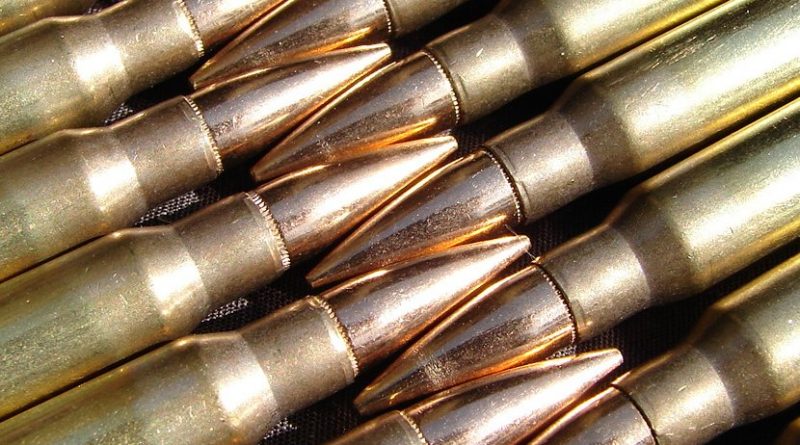 Stockholm International Peace Research Institute (SIPRI) released a report showcasing an increase of 5.5 per cent in the volume of international arms transfers during 2015–19, compared with the previous five-year period.1 The report highlights the strength of key strategic partnerships such as Russia-India, US-Japan and China-Pakistan, reinforced by arms trade. While Russia accounted for 56 per cent of India’s arms imports, 96 per cent of Japan’s arms imports came from the US and Chinese equipment made up 73 per cent of Pakistan’s arms imports. The United States, Russia, France, Germany and China continue to be the world’s largest arms exporters.

The growth of arms trade from Europe, especially France and Germany,is a significant change. French arms exports registered a 72 per cent increase in 2015-19, reaching their highest level for any five-year period since 1990 and accounted for 7.9 per cent of total global arms exports. Similarly, Germany’s arms exports were 17 per cent higher in 2015–19, compared with 2010–14, and accounted for 5.8 per cent of global trade. The United Kingdom however registered a negative growth of 15 per cent. Asia and Oceania became even bigger markets for the US, Russia and China in the past five years, generating 30 per cent  of trade for the US, 57 per cent for Russia and 74 per cent  for China.

It was also interesting to note the distinct patterns in Africa, Latin America and Northeast Asia. While Brazilian arms imports in 2015–19 were the highest in South America — accounting for 31 per cent of the sub-region’s arms imports, South Africa, the largest arms importer in sub-Saharan Africa in 2005–2009, imported almost no major arms in 2015–19. In Northeast Asia, South Korea’s arms exports rose by 143 per cent during 2015-19, as compared to 2010-14, propelling it to the list of the top 10 largest exporters for the first time.

The US has further strengthened its position as the world’s largest arms exporter, with its exports of major arms being 76 per cent higher than those of the second largest arms exporter in the world, the Russian Federation. Between 2010–14 and 2015–19, major arms exports from the USgrew by 23 per cent, and it was the primary exporter to 19 of the top 25 arms importers in the world. Overall, the US transferred arms to 96 countries. The Middle East was its biggest market, with 51 per cent share and Saudi Arabia — the world’s largest arms importer for 2015–19, accounted for 25 per cent of US exports. Apart from the Middle East, US arms exports accounted for the lion’s share of imports by Japan (96 per cent), Saudi Arabia (73 per cent), Australia (68 per cent), the UK (67 per cent), Israel (78 per cent) and Norway (77 per cent). Interestingly, Germany was listed as the primary supplier of arms for the US (21 per cent).

Russian arms exports saw a decline, registering a negative growth of 18 per cent. This was primarily due to fall in exports to Syria (87 per cent) and India (47 per cent), with SIPRI analysts noting that ‘Russia lost traction in India …’2 While Russian arms exports to India have indeed seen a decline in percentage terms, this has little relation to the strength of India-Russia relations as India is still Russia’s primary arms importer. Along with China and Algeria, India accounts for 55 per cent of Russian exports. The decline in Russian exports to India may also be attributed to the fact that there has been a reduction in Indian arm imports from 14 per cent of the global arms trade in 2010-14 to 9.2 per cent in 2015-19. The reduction in Russian arms export to Syria, however, did not affect Moscow’s Middle Eastern arms trade which rose by 30 per cent, with Egypt and Iraq being the main recipients of Russian weapons.

While US arms exports increased and Russian exports declined, Chinese arms exports remained relatively stable and did not see a significant jump — growing by only 6.3 per cent. Asia and Oceania accounted for nearly three-fourths of Chinese exports, followed by Africa (16 per cent) and the Middle East (6.7 per cent). China’s share within Asia and Oceania was primarily due to significant arms trade with Pakistan (accounting for 73 per cent of its imports), Bangladesh (72 per cent) and Myanmar (49 per cent). However, as the fifth-largest arms exporter in 2015–19, China significantly increased the number of recipients of its major arms, from 40 in 2010–14 to 53 in 2015–19.

The SIPRI report makes for interesting reading when juxtaposed with the geopolitical flux associated with some of the key regions of the world. The report for instance highlights a reduction in Turkey’s arms imports, even as the country has faced a difficult regional security situation in the recent past. On the other hand, Egypt, without any discernible imminent, external threat, has seen a high jump in its arm imports (of over 200 percent) — making it the third-largest arms importer for 2015–19. In Northeast Asia,at a time when the Democratic Peoples’ Republic of Korea (DPRK) undertook ballistic missile tests in quick succession, Japan’s arms imports grew substantially (72 percent) but South Korea’s imports remained stable, even as its exports grew substantially, as noted earlier. It is a fact though that South Korea’s domestic arms industry has become stronger in the past decade.3

Arms trade between states can be better regulated through adherence to best practices of informal mechanisms such as the Wassenaar Arrangement (WA) and the Missile Technology Control Regime (MTCR).4 While the MTCR seeks to limit the proliferation of missiles and missile technology, the WA promotes greater responsibility in transfers of conventional arms and dual-use goods and technologies. Out of the top 10 arms exporters, the US, Russia, France, Germany, the UK, Spain, Italy and South Korea are members of the WA and MTCR; only China and Israel are non-members. On the other hand, of the 25 top arms importers, only nine (Australia, India, Italy, Japan, Norway, South Korea, Turkey, the US, and the UK) are members of the WA and the MTCR. If the other major arms importers become members of such informal groupings, it can help build transparency and also limit the proliferation of dual-use goods.

Although non-governmental organizations (NGOs) have become powerful voices in world environmental politics, little is known of the global picture of