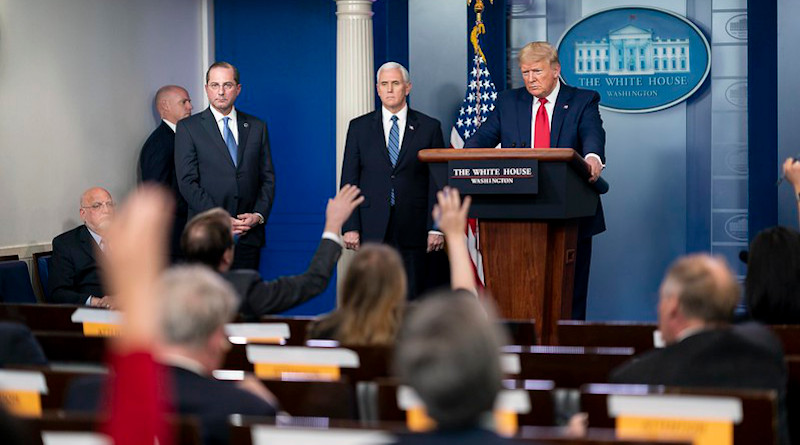 The ongoing COVID 19 crisis has clearly exposed the weakness and shortfalls in American democratic culture, system and wisdom.  With around million Americans infected by the virus and more than 50,000 people losing their lives, a healthy democratic country, that America claims itself to be, should have gone into a near silent mode without airing counter productive critical views, with  grim determination to overcome the crisis with cooperative spirit.

On the other hand, this crisis period has been marked in America by politicking, counterproductive arguments, use of abusive language about the duly elected American President and media’s comments losing sense of proportions and visual, print and social media liberally using  vituperative language and publishing sarcastic cartoons.

Such a scenario in America today gives an impression of a divided country, with various groups exhibiting bitterness and hatred against each other, giving an overall impression to the outside world that American democracy lacks maturity.

While the entire world community is recognizing the fact that social distancing is immediate need to overcome the crisis, particularly since vaccines/drugs for treating the virus are now only  in the development stage, it is shocking that public protests and voices are being heard against the government’s directives to observe social distancing regulations in USA.

Further, it is even more shocking to see a section of people protesting against American President and demanding his resignation by holding protest meetings with “body bags” in front of the White House, even as the country is facing grim crisis.

Further, the despicable terms such as idiotic, clown etc. are being freely used to criticise the actions of the American President.

The above condition indicates that the concept of personal freedom has been taken to ridiculous level, which make many people suspect that what America has today is not orderly democracy, but chaotic democracy.

Need to rally behind the leader in crisis

In a mature democracy, while confronting with a severe crisis of COVID 19 that America faces today, what is important is that people of America should rally behind the American President, indulge in productive discussions and consultations and finally accepting the decision of the President in toto.

With regard to the COVID 19 crisis in USA, there could be different views as to whether President Trump has failed to check the entry of virus into America. Nobody seems to have a clear answer to this vexed question.  Everybody in the USA seems to agree that WHO has failed in its duty  to forewarn the world about COVID 19. Probably, if such a forewarning had been issued, President Trump might have taken early steps to prevent the virus spreading, on which one cannot comment conclusively at this stage.

As it is known, no American President is a master of all subjects and he is supported by an army of advisors with specialization in different fields and he is heavily dependent on them for taking crucial decisions. He receives advice and takes his decision by a process of consensus and finally President’s views being decisive.  In this process, there may be different styles adopted by different Presidents to express their views. With regard to suggestions of Trump like the use of Chloroquine drug for treating COVID 19, there could be different alternate opinions.

In daily briefings, obviously President Trump has been airing various suggestions given to him by different experts and probably throwing it open for public debate and deliberations to understand the public perspective.

In America like so many other countries, the President does not decide the drugs for treatment. But scientific bodies like Food and Drug Administration in USA (FDA) test the drug and recommend its use.

All said and done, whatever one may think about the track record of Donald Trump in earlier days and as President of USA, it is necessary that in a mature democracy, people should realize the need to stand behind the duly elected leader in a democratic way, at the time of national crisis.

Even if criticisms were to be aired, it has to be done in a dignified and healthy manner and without diverting the attention of the society to politicking rather than curative plans and strategies.

Perhaps, the citizens of America have a lesson or two to learn from the way that India has reacted to the COVID 19 crisis.

When Indian Prime Minister Modi wanted the countrymen to clap on one occasion and on other occasion switch off power for a few minutes and light a lamp to applaud the medical professionals and express national solidarity, the entire country responded, though some could have questioned the need for such symbolic gestures.

Media and think tanks in America need to introspect

It is high time that media in the USA should  introspect about commenting on any issue or views in a crisis period that would degrade to the present level of hate mongering. The media in the USA has a lot to answer and explain to the people about their behavior during this severe COVID 19 crisis.

It is also high time that think tanks in America should examine whether the American democratic system and practices is now going astray.