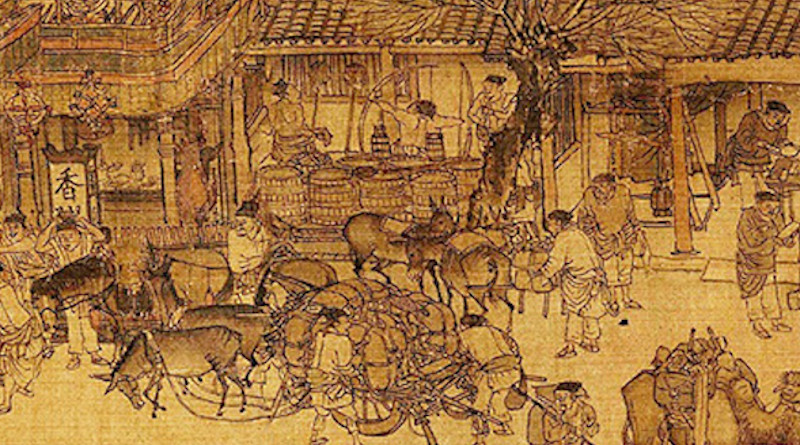 The Year 1000: A small portion of the Qingming Scroll from the Song Dynasty shows vibrant trade in a Chinese community.

The year 1000 marked the first time that many regional trade routes connected and ideas began circling the globe.

Globalization started much earlier than you might expect – in AD 1000.

That is when, as incontrovertible archeological evidence shows, the Vikings left their home region of Scandinavia, crossed the North Atlantic and landed in northeastern Canada. The Norse voyages linked existing pathways across North and South America with those across Afro-Eurasia. As new pathways opened on continents, merchants, goods, technologies and religions moved around the globe for the first time. Regional networks joined together to tie a loop around the globe.

As the Icelandic sagas inform us, trading began almost immediately with a premium placed on novel goods. When the locals exchanged furs for wool cloth the Vikings had dyed red, they tied the lengths of red wool around their heads. As supplies began to run out, the Norse cut shorter and shorter pieces, some no “wider than a finger’s width.” Still the locals offered full pelts for the scraps. Even in those early encounters, the lure of a new product – red cloth – cast a mesmerizing spell on consumers, just as excited purchasers today clamor for the latest Nike sneakers.

For the first time in history, an object or message could travel all the way around the world. No one has found such an item – yet! – but archaeology could still surprise us.

To be sure, this was not globalization in our current sense of the word. Ordinary people could not travel virtually anywhere, walk into a store and buy goods from another country. Nonetheless, the changes around the year 1000 constituted globalization in the most fundamental sense because what happened in one place profoundly affected the residents of distant regions.

True, people living in a few regions – Rome, India, China – knew well before 1000 that other societies existed. Consider the sea trade between Rome and India, for example, or the overland Silk routes linking Central Asia with China. But the changes of 1000 influenced the entire globe.

In the Americas, the Maya, based in the Yucatan Peninsula, traded cacao beans and brightly colored feathers – and the occasional live caged macaw– for the turquoise of Chaco Canyon, New Mexico, some 2,000 miles, or 3600 kilometers, away.

In Afro-Eurasia, the ongoing demand for slaves in Constantinople (modern Istanbul), Baghdad, Cairo and other cities resulted in the forced movement of millions of people from Africa, Eastern Europe and Central Asia hundreds of years before the transatlantic slave trade began. So many slaves came from Eastern Europe that the modern English “slave” isderived from “Slav.”

Besides the Norse, other key players in the year 1000 included the Chinese, the Indians and the Arabs. The longest maritime route in regular use connected China with the Persian Gulf cities of Oman and Basra, the port closest to Baghdad. It measured 8,000 miles, or 13,000 kilometers, but if boats crossed the Indian Ocean directly without hugging the shore, the distance was 6,500 miles, or 10,500 kilometers. And if the boats proceeded on to Sofala, in modern Mozambique, the extra leg totaled 4,700 miles, or 6,500 kilometers. The entire distance was three times longer than Columbus’s first voyage across the Atlantic, which measured 4,400 miles, or 7,700 kilometers.

The route from China to Sofala combined two pilgrimage pathways: one for Muslims going from China to Mecca, the other for East Africans also performing the hajj. Most of the traffic traveled between the ports on China’s southeast coast and the Arabian Peninsula, but some goods, such as high-fired Chinese celadons – as prized as iPhones in their day – reached ports along the East African coast.

As the export trade boomed, Chinese workers shifted to full-scale manufacturing of products – ceramics, textiles, metal goods – for their overseas customers. As early as 826 Chinese potters tried to copy Arabic words on export wares, but made mistakes in the lettering, just as clothing manufacturers print T-shirts with spelling and grammatical errors today. The first phase of globalization occurred long before the introduction of either steam or electric power and was based on sails and wind, carts and horses and other draft animals.

Chinese consumers at all social levels consumed vast quantities of spices, fragrant woods and unusual plants. The peoples of Southeast Asia who lived in forests gave up their traditional livelihoods and completely reoriented their economies to supply Chinese consumers, rich and poor, with spices and fragrant woods. These developments meant that globalization was more advanced in Southeast Asia and China.

As foreign merchants increasingly benefited at the expense of local businessmen, the world’s first anti-globalization riots and attacks on the newly wealthy broke out in cities such as Cairo, Constantinople and Guangzhou.

The most surprising journeys around the year 1000 took place when speakers of Malayo-Polynesian languages departed from the Malay peninsula and arrived on the island of Madagascar off the east coast of Africa some 4,000 miles away.

Globalization also profoundly affected those who never left home. Once a ruler converted, and many did around 1000, many of their subjects adopted the new faith as well. Following the opening up of the new pathways, rulers learned about the religions of their neighbors, and a spate of conversions occurred. Today, 92 percent of believers subscribe to one of the four religions – Islam, Christianity, Hinduism or Buddhism – that gained traction in the year 1000.

These exchanges of the year 1000 opened some of the routes through which goods and peoples continued to travel after Columbus traversed the mid-Atlantic. Yet the world of 1000 differed from that of 1492 in important ways. Unlike in 1492, when firearms and cannon enabled the Europeans to defeat almost everyone they met, the travelers who encountered one another in the year 1000 were much closer technologically.

The Thule peoples, the ancestors of the modern Inuit, mastered seal-hunting technologies that allowed them after 1000 to settle a broad band of northern territory stretching from Alaska all the way to Greenland. The failure of the Scandinavians to adapt to the northern climes ultimately forced them to withdraw from Greenland.

Some parts of the world, such as China and the Middle East, flourished while others, Europe in particular, lagged behind. In fact, the world of 1000 looks much more like our world today in which the Chinese, Arabs and Americans are all genuine rivals to the Europeans.

As peoples living in different regions established contact with one another around the year 1000, they set the stage for the next phase of globalization in the 1500s when the Europeans reshaped existing networks to suit their own interests. But the Europeans did not invent globalization. They changed and augmented what was already there since 1000. If globalization hadn’t yet begun, Europeans wouldn’t have been able to penetrate the markets in so many places as quickly as they did after 1492.

The most important lesson we can learn from our forebears is how best to react to the unfamiliar. Some Vikings killed the residents of northeastern Canada as they slept under canoes without even checking to see if they were dangerous. On other continents, those who encountered strangers took their time, greeted strangers patiently and traded their belongings for whatever goods their new acquaintances offered. Some of the most successful learned new languages and forged trading relationships across huge distances.

True, globalization did not benefit everyone who experienced it. But those who remained open to the unfamiliar did much better than those who rejected anything new. That was true in the year 1000, and it is just as true today.

*Valerie Hansen is the Stanley Woodward Professor of History at Yale University, where she teaches Chinese and world history. This essay is based on the prologue of her most recent book, The Year 1000: When Explorers Connected the World – and Globalization Began, published by Simon + Schuster. She is also the author of The Silk Road: A New History and The Open Empire.

One thought on “When Globalization Really Began – Analysis”