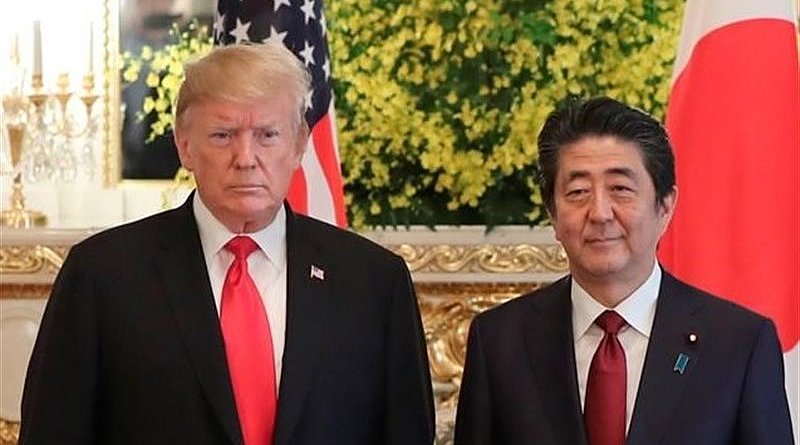 Speaking during a joint news conference after talks in Tokyo, Trump said he viewed the tests as a bid for attention by North Korean leader Kim Jong Un and that he was not personally bothered by them.

Abe said the tests did violate the Security Council resolution. He also repeatedly stressed that in negotiations with North Korea his government is most interested in resolving the issue of North Korean abductions of Japanese citizens.

​Trump’s comments focused largely on economic issues, expressing his expectations of reaching trade deals with Japan and China that would reduce U.S. trade deficits, and highlighting what he sees as the “tremendous economic potential” that awaits North Korea if it makes an agreement that includes giving up its nuclear weapons.

Abe welcomed what he called the steady progress of trade talks with the United States, particularly regarding energy, digital and infrastructure sectors. He said he looks forward to further cooperation and celebrated Trump’s visit as an exhibit to the world of the “unshakeable bond” the two countries possess.

No quick breakthrough on trade was expected although both leaders have expressed a desire for a bilateral trade pact after Trump pulled the United States out of the comprehensive 12-nation Trans-Pacific Partnership, which Tokyo had spearheaded with Washington under Trump’s predecessor, Barack Obama.

At the start of their talks Monday, Trump said he would be fine with Abe serving as a mediator between the United States and Iran.

Trump later at the news conference beside Abe said, “I think we’ll make a deal.”

“It has a chance to be a great country, with the same leadership. We’re not looking for regime change. I just want to make that clear. We’re looking for no nuclear weapons,” Trump added.

​U.S. – Iran tensions escalated in recent weeks as Trump ended waivers that had allowed some of Iran’s biggest oil buyers to continue making purchases despite new U.S. sanctions, and as he increased the U.S. military presence in the Gulf in response to what he said were Iranian threats.

Earlier Monday, Trump became the first foreign leader to meet with Emperor Naruhito, who ascended to the throne May 1.

The emperor is hosting an imperial banquet at the palace Monday night.

“Our alliance is a rich inheritance we must pass on to our children,” Trump said in remarks he read at the start of the formal dinner in the palace’s largest banquet hall, known as the Houmei-den, which was attended by 180 guests.

Before Trump departs Japan on Tuesday, he is to visit the naval base at Yokosuka to tour a Japanese helicopter carrier and address American service personnel in conjunction with the U.S. Memorial Day holiday (observed on Monday).