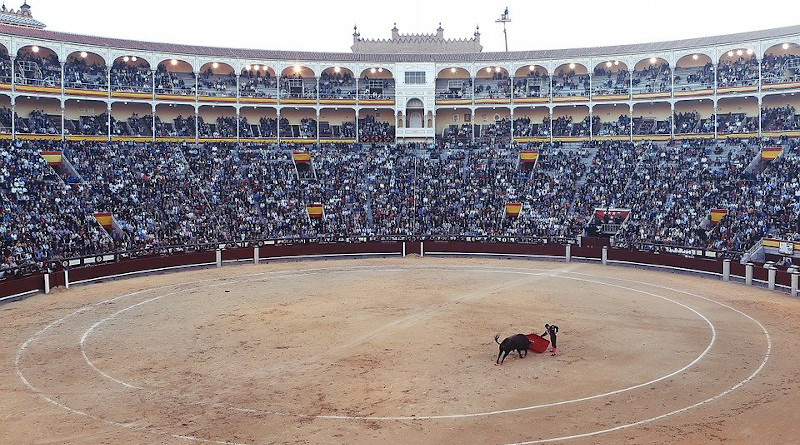 With a face mask covering his rugged good looks, Cayetano Rivera posed as part of a protest by Spanish bullfighters who believe the country’s spectacle is under threat.

“Do not censure culture,” read the message on the mask worn by Rivera, one of the country’s most famous matadors, who appears as often in the glossy magazines as he does in the ring.

Since the COVID-19 crisis prompted a nation lockdown, Spain’s bullrings have remained empty, silencing a controversial part of the country’s cultural life.

The Running of the Bulls festival in Pamplona, which attracts tens of thousands from across the world every July, was among the headline festivals that were cancelled.

Angered by the lack of financial help from the state as losses ran into the millions of dollars, bullfighters went on the offensive.

“Bullfighting demands its place among the cultural industries due to its tradition, economic importance and social support,” Rivera wrote on his Instagram account.

As concerns about a second outbreak of coronavirus continue, the possibility of filling bullrings with thousands of spectators remains in doubt.

Every aspect of Spain’s beleaguered economy has been devastated by the pandemic but few other industries inspire such passion.

Known as the national fiesta in Spain, it is classified as part of the country’s cultural heritage.

The sight of men dressed in brightly colored traje de luces (suit of lights) doing battle with half-ton bulls has inspired artists through the ages from Francisco Goya, to Pablo Picasso and Ernest Hemingway.

Today the spectacle provides work for 54,000 people and generates nearly $4.4 billion for the economy annually, almost 1% of GDP, according to the National Association of Organizers of Bullfights.

Spain’s matadors claimed the left-wing government unfairly offered financial help totaling $121.3 million for the cinema, music and theater sectors while bullfighting has initially been offered only a paltry $71,655.

Victorino Martín, president of the Fundacíon de Toro de Lidia, a group created to defend the interests of the sector, estimated that losses incurred by the lockdown totaled $772 million.

Some ranchers have given up and slaughtered all their animals, Martín said. In one case 400 animals were killed.

He said taxes unfairly penalize breeders of fighting bulls who must pay a 21% value added tax per animal while farmers of normal bulls pay 10% per animal.

“What we want is justice. Bullfighting is the second most important cultural activity after football in terms of viewers and TV rights in Spain,” Martín told VOA in a telephone interview.

“We are an essential part of Spanish culture. I am hopeful we will get some aid. If not, this great tradition will struggle to survive.”

A spokesman for the Spanish ministry of culture said the matter was under consideration.

Bullfighting has been on the wane since the 2008 financial crisis that plunged the country into a five-year recession, forcing deep cuts in public spending.

Many local authorities slashed spending on bullfights that are normally the centerpiece for annual fiestas.

The number of bullfighting events declined from 3,651 in 2007– a year before the financial crash – to 1,521 in 2018, the last year when government figures were available.

More recently, a series of left-wing regional governments have attempted to ban bullfighting outright as opposition to the custom grows in Spain.

More than 135,000 people have signed a petition called for no public money to be given to help bullfighting.

In the wake of the petition, Electomania, a survey company, published a poll that found 47% of Spaniards were in favor of banning the controversial spectacle, while 18.6% opposed prohibition and 37.7% opposed bullfighting but did not want it to be banned.

Laura Duarte, of Pacma, an animal rights political party, describes the sport as a “cruel tradition,” and one she says receives millions of dollars in grants from the European Union, central and regional governments.

“We say this is not the moment to pour more money into bullfighting. It is the moment to do away with it for good,” she told VOA in a telephone interview.

Antonio Lorca, the bullfighting critic of the Spanish newspaper El País, said the industry was poorly organized and had struggled financially even before the coronavirus crisis.

“Compared with something like football, which is well organized, bullfighting is divided and was not in a good position before this,” he told VOA in a telephone interview.

“What will be key is if bullfighting returns in August or later. Coronavirus will not kill the bulls, but it could help its demise.”