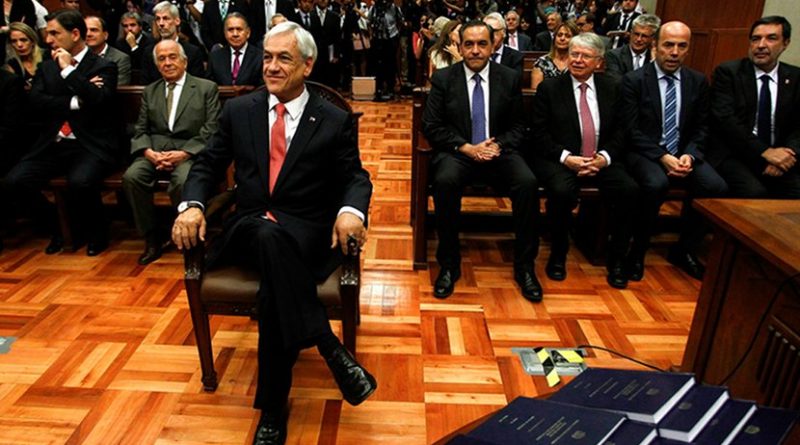 The brutal machinery of neoliberalism is again rearing its ugly head in Chile in the form of a healthcare crisis. Already there are more than 74,000 cases, approximately 800 deaths and according to President Sebastian Pinera, the health system is “almost reaching its limit”. In Santiago, the capital of Chile, 95% of intensive care beds are occupied and hungry, jobless protestors are clashing with riot police to voice their demands for lockdown benefits.  All this pandemonium is due to the structural feature of the Chilean economy which favors privatization and crony capitalism instead of a state-managed welfare apparatus. The contemporary scenario, therefore, represents a direct continuation of entrenched neoliberalism and it needs to be understood in the concrete context of Chile’s neoliberal history.

With the US-sanctioned overthrow of democratically elected socialist president Salvador Allende on 11 September 1973, Augusto Pinochet established the rule of military junta and eagerly embraced the brainwashed acolytes of Milton Friedman named “Chicago Boys”. With the assistance of Pinochet’s military dictatorship and Chicago Boys’ economic perspicacity, Chile experienced unendurable suffering, in which the total number of people killed or tortured reached 40,000, poverty rose from 20% to 44% and corporate profits rose from 31.4 percent to 42.4 percent. This was termed by Milton Friedman in 1975 as the “Chilean Miracle” and the aftermath of this malicious miracle had catastrophic consequences for the Chilean citizens. Due to the presence of the Chicago Boys on the Chilean soil, the diametrically opposed ideology of Marxism had to eliminated and this was done through a strategically orchestrated extra-judicial execution of all kinds of leftists and this hatred of leftists was legalized in the 1980 constitution in which Article 8 proscribed any doctrine based on “class struggle”.

After 17 years of Pinochet’s neoliberal military dictatorship, Chileans finally got the opportunity to vote in a plebiscite to replace Augusto Pinochet with a democratic government. Pinochet lost this plebiscite and in 1989 elections were held in which Patricio Aylwin, a Christian democrat, emerged as the political victor. It is important to remember here that despite representing a so-called democratic transition, Patricio Aylwin was also complicit in Pinochet’s dictatorship and in 1970s he had publicly discussed a “soft coup” against Allende which would have used economic means, instead of military means, to overthrow the Popular Unity government. This indicated continuity between Pinochet’s brute dictatorship and Aylwin’s democracy without democrats. During Aylwin’s incumbency, Pinochet was allowed to remain the Commander-in-chief of the army till 1998 and this crucially emphasized the unwillingness of Aylwin’s “Coalition of Parties for Democracy” (Concertación) to make a radical rupture with the previous dictatorial architecture. In the economic dimensions, the new democratic government did not substantially modify anything and it merely provided a politico-ideological framework of insipid liberal humanitarianism for the full-fledged functioning of neoliberalism.

Due to the absence of any economic measures which would have promoted the growth of a post-Pinochet non-neoliberal system, income inequality has continued to rise in Chile and the unconcealed proliferation of capitalist cruelty has existentially precarized almost the entire population. Today, the richest 0.1% possess 20% of the entire wealth and 10% of the population have captured 57.7% of the total income. According to Forbes, there are 10 billionaires in Chile with a combined wealth of $40 billion, equivalent to 16% of GDP. Chile’s income inequality gap is 65% wider than the OECD average and 45% of the salaries of middle and low income groups are spent on paying debts. Moreover, the health infrastructure is extremely insufficient because it provides minimal state assistance only to the poorest section and the rest of the people are part of the privatized social security system which operates through vouchers and private individual accounts. People have to sometimes wait for 3 months for basic surgeries and in 2018, 26,000 people died because of delays in medical care.

In the contemporary situation of growing class conflicts amid the Covid-19 pandemic, we can clearly see the amplified effects of Chilean neoliberalism in which one of the most expensive countries of Latin America is witnessing a fight against hunger and joblessness. This fragile class struggle has been further compounded by the current neoliberal right-wing president Sebastian Pinera who epitomizes the intensifying impoverishment of Chileans by having a net worth of $2.7 billion. Sebastian Pinera has directly invoked the murderous memories of Pinochet’s military regime by violently repressing anti-neoliberal protests in October 2019. These protests were triggered by an increase of 30 pesos in public transport fares and this had a significant impact on the daily lives of working class people who spend roughly 20% of their salary on transport. The government of the billionaire businessman quickly reacted to this with a deployment of over 9,000 soldiers, declaration of a state of emergency and the usage of regressive anti-terrorist laws. During these tense times, Sebastian Pinera greatly augmented the militarization of Chile by declaring that “we are in a war against a powerful and relentless enemy that respects nothing and no one”. The effect of this war-mongering rhetoric was conspicuous through the rapid detention of 10,365 Chileans in 4 months which amounts to 86 detentions everyday for a period of 120 days. Apart from mass-scale detention, the military also wounded over 2000 protestors and used riot shotguns which are banned in crowd control measures.

It seems likely that the class struggle in Chile will continue to foreground the innumerable contradictions of neoliberal capitalism in innovative ways. The spiraling discontent of the Chilean masses with the right-wing neoliberalism of Sebastian Pinera is generating unprecedented turbulence in the Pinochetist paradigm of economy and is emphatically questioning the effectivity of neoliberalism. Pinera will definitely try to cleverly co-opt the myriad threads of resistance with the help of worthless sops and he has already tried to do this with the October protests by presenting a “new social contract” which introduced trivial cash transfer programmes. Chilean people have to resist this co-optation and they have to remember what Salvador Allende said in his last speech: “History is ours and the people make it”.

Home » The Struggle Against Neoliberalism In Chile – OpEd