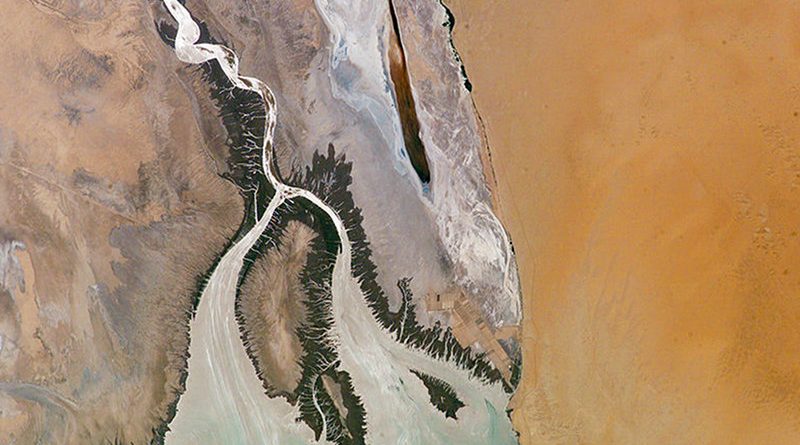 The 2014 experimental controlled pulse of water to the Colorado River Delta has revealed an interesting twist on how large dry watercourses may respond to short-term flooding events: the release of stored greenhouse gases.

The findings were reported at the Goldschmidt conference in Yokohama, Japan.

As presenter Dr Thomas Bianchi said, “We saw a rapid release of greenhouse gases (CH4 and CO2) from the riverbed sediments to the floodwaters. These gases were largely derived from carbon which had been stored in the dry riverbed, perhaps for decades.”

Radiocarbon measurements indicate a resuspension and dissolution of trapped carbon in the riverbed that was released into the flood waters. The dissolved inorganic carbon (DIC, e.g., carbon dioxide, carbonic acid, bicarbonate, and carbonate) was found to be aged (often more than 800 years old) which would suggest that trapped CO2/IC would have been dissolved and released rapidly into the river water when flooded.

According to Bianchi, “This shows that more work is needed to better understand the more unpredictable consequences of floods and droughts on aquatic ecosystems, particularly in the face of global climate change.”

The Colorado River – which carved out the Grand Canyon – is now contained by the Hoover and other dams. It is perhaps North America’s most iconic waterway. Increasing use of water from the Colorado in both the US and Mexico has meant that the Colorado Delta in Mexico, where the river runs into the Gulf of California has largely dried up. The Delta wetlands of the Colorado are now only around 1/20th of their size prior to the Hoover Dam construction.

In 2014, a major 8-week experiment* released 130 million cubic metres of water from the Morelos dam (on the border with Mexico and the USA) causing a rise in river levels as far down as the delta. The pulse of water, concentrated around 27-29 March 2014, was aimed at bringing water to delta, which has been starved of water for decades. Scientists were able to look at the before and after conditions, to evaluate how future water releases might affect agricultural crops and natural plant and animal life of the lower delta.

The results of this very brief controlled flooding event showed that some of the carbon stored in the riverbed was rapidly released into the floodwaters, which although not directly measured, also likely allowed for the release of these greenhouse gases to the atmosphere. This indicates the need for a long-term approach, not just for the Colorado, but many other areas in the world that are currently experiencing human-induced changes in water flow.

According to Bianchi, “Based on our findings, we suggest that stored carbon in riverbeds (e.g., greenhouse gases) is more likely to be released in a more variable climate, with floods and drought, than under more stable conditions in arid and semi-arid regions. As human needs for water resources continues to increase, the drying and rewetting of once natural river deltas may fundamentally alter the processing and storage of carbon.”

Bianchi added, “There is a lot still to understand. For example, we don’t know how the duration of the wet and dry periods might affect the gas release, or whether maintaining minimum water flow levels might help.”

Bianchi said another factor that needs to be considered is whether the restored water supply would promote the growth of native plant species in the lower delta. These marsh-like plant communities capture atmospheric carbon and have the potential to store such greenhouse gases in their soils for long periods of time. There are other potential benefits too, for example the restoration of an eroding delta which would lead to coastal stability that should lead to benefits to local fisheries. Resolving these uncertainties is critical for assessing the role of inland waterways on global carbon budgets, identifying potential feedback loops under a changing climate, and planning future flow restoration events.

“In practical terms, this means that restoring the river delta is not just a case of opening a tap every now and then: both the US and Mexico need to make a long-term commitment to maintain this complex delicate ecosystem, particularly in a region with such low rainfall. But we think that aiming for restoration is clearly the right thing to do,” Bianchi said.

According to Professor Elizabeth A. Canuel of Virginia Institute of Marine Science, “This presentation reports an unexpected finding that a short-term controlled flooding event on the Colorado River resulted in the release of greenhouse gases (CH4 and CO2) from the newly wetted riverbed sediments. Generally, production of greenhouse gases (GHG) generated from aerobic and anaerobic respiration of organic matter is thought to be higher in dry soils, rather than wet soils. However, as this preliminary study shows, dry river sections can become “hot spots” of biogeochemical transfer and transformation when organic matter and nutrients accumulated in the sediments are “activated” during rewetting phases and first-pulse events such as this controlled flooding event.”

In the opinion of Canuel, “Overall, this study provides new insights about biogeochemical responses to flood events. It also has management implications because it shows that release of GHG could be a potential unintended consequence of controlled flood events that will need to be considered against the benefits of these events in terms of restoration and/or other ecological services.”