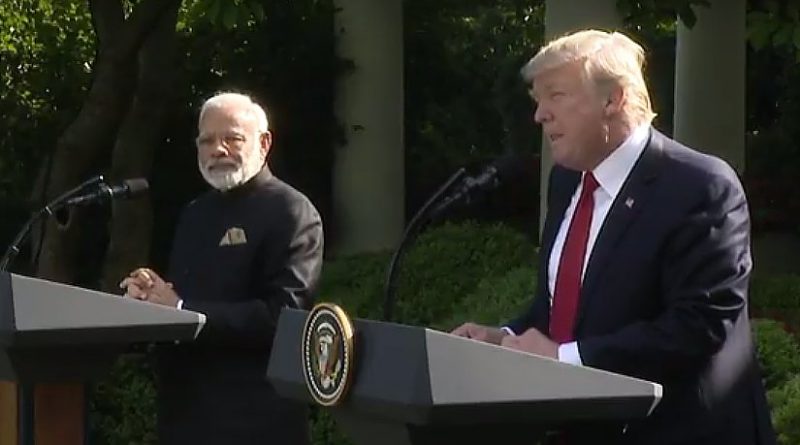 Despite India being a piece of jigsaw for the USA to counterbalance China, Chinese media was upbeat on the Modi-Trump summit. Chinese leading media, Global Times, hogged the headline with “China Could benefit from Trump-Modi summit”. It is puzzling. The think tanks and analysts were bogged down by suspense with the Chinese overtone. The Atlantic Council, a top US think tank in a paper, “Transforming India from a balancing to leading power’, urged US President Donald Trump to prioritize its ties with India to counter Beijing’s growing influence.

This paradoxical convulsion in Chinese diplomacy raised several eyebrows on the Trump-Modi summit. The logic of the Chinese media to chant the summit was not, however, baseless. China’s positive expectations were polarized on opening of market access and dilution of HI Visa regulations. As a resultant, a new synergy was expected to be evolved from the summit, which could have a cascading impact on China’s trade and investment relation with India.

The Chinese media highlighted two reasons for the benefits of the summit. First, Trump’s “America First”, a non-rhetoric campaign, was expected to mount pressure on India to open the gate more widely for US market access. Presumably, this would unleash a benefit to Chinese trade and investment opportunities in India. China is the biggest trade partner of India, despite roiling under severe trade restrictions , such as anti-dumping and security concerns. Secondly, in the pursuit of Trump treating Modi a “Good Friend”, the Chinese was hopeful for a dilution in the H1Visa, which could help China too, since a large number of Chinese immigrants are using this visa gate.

It says that though India has eliminated the licensing restrictions for most of the consumer goods, it requires special import license for certain goods, such as motor cycles and vehicles. It focused on barriers with regard to government procurement with price preferences to the domestic manufacturers. It was critical on export subsidies, such as export earnings are exempt from taxes, both corporate and domestic manufacturing taxes and the complex custom procedures.

According to Indian official, some of the concerns were being addressed and custom procedures would fall in line with the Trade Facilitation Agreement. Government procurement is being addressed, aligning with Make in India campaign.

Government procurement has been reinvented, with an eye to push Make in India. For example, Ministry of Urban Development made it mandatory to procure railway equipment for metro projects from domestic sources. According to the policy, a minimum of 75 percent of metro coaches and critical signaling equipment are to be procured from domestic sources by the Central and State level metro project authorities.

Currently, no domestic company is manufacturing metro coaches. All four manufacturers in the country are foreign investors. Chinese state run company, China Railway Stock Corporation (CRSC), has decided to set up manufacturing facilities for metro rail coaches and equipment in Nagpur .
China is emerging a big ticket investor in India. In 2015, Chinese investment in India leapfrogged eight times and became the eighth biggest foreign investor in India. During 2016, Chinese companies proposed US $ 2.3 billion worth of investment in the country.

Trade relations between India -USA and Sino-India are diagonally opposite to each other. While India has trade surplus with USA , it has trade deficit with China, with higher magnitude. While India woos American investors for advancement of technology and innovation, India urges China to invest to counterbalance the trade deficit. In the Joint Statement, both Trump and Modi pledged for deepening defense cooperation, recognizing India as a “Major Defense Partner”. The emphasis was for working together for advanced defense equipment and technology. This refers to a significant take way by Modi to woo the USA investors in defense, which was greatly opened for the foreign investors during his regime.

Foreign Direct Investment has ballooned during the Modi tenure. With the summit extrapolating an upturn in the Indo-US relation, foreign investment from USA is likely to surge, given the Indian side ensuring to address the trade and investment barriers.

The important point of US President Donald Trump is his inconsistency. He is unpredictable and naïve in diplomacy. Even though his isolationist policy “ American only“ was the driving force to let him win the unexpected battle of election, his warm greetings and roll out of red carpet to Modi, treating him a Good friend, will further advance Indo-US relations, which was built during the three years period of Obama regime.

Before election, according to Chinese media, Global Times, Trump will pay little attention to Asia Pacific, unlike Obama and Hillary Clinton, in the wake of his assertion on “America only”. This may prove benign to India-China economic relation.

Therefore, the summit has trilateral impact on Indo-US-China relation. Interestingly, the upturn in Indo-US relation is unlikely to impact the Chinese binge in investment in India or growing Sino-India economic relation.