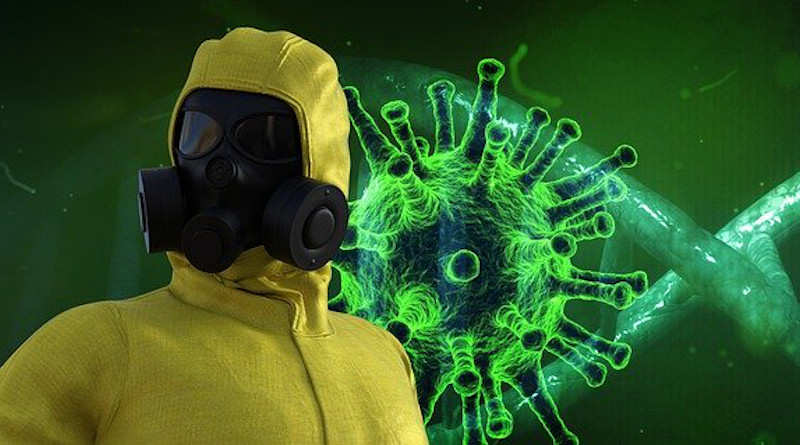 Corona as a black swan event had left the wider and multilateral ramifications for the entire world. What would be the post-COVID world which one can anticipate? However, what is happening presently, from the same one can envision how the present world would emerge, seems to be a dystopian world.

COVID-19 is not only taking a heavy toll of the human life; rather it has been impacting the multilateral dimensions of human life. It has put the human life at an inflection point. Economy has been witnessing its worst kind of the recession even bigger than that of the slump and stagnation of the 1920s. Unemployment, poverty, turning the GDP into negative trends, turning of the democratic governments into tyrannical governments, downfall of democracy, dehumanizing the society in terms of loosening of the familial relation threads, xenophobic trends, exponential increase in corruption and crimes, religion as tool for oppression, prevalence of violence and worsening of the international relations, black markets and many negative tendencies have been becoming part and parcel of the present world during the COVID-19.

If we see historically, Plato was the first one who envisioned an ideal state ruled by a philosopher king in his book, the Republic. The philosopher king will rule the state in such a way by which poverty would be eliminated and equality through fairly distributed resources would prevail in the state.  After a long gap, Thomas More (1478–1535) had written a Latin book named ‘Utopia’ in 1516which was a socio-political satire.  At the same time, it also idealizes a Utopian society wherein equality and justice in terms of political, social, economic would be the main element of the state. But on the other hand, Sargent (2010:21) has argued that utopian society’s nature and manifestations are inherently contradictory, given its heterogeneous structure and different levels of satisfaction. It is worth to quote Sargent here, who said, “There are socialist, capitalist, monarchical, democratic, anarchist, ecological, feminist, patriarchal, egalitarian, hierarchical, racist, left-wing, right-wing, reformist, free love, nuclear family, extended family, gay, lesbian and many more utopianism…. some argue, is essential for the improvement of the human condition. But if used wrongly, it becomes dangerous. Utopia has an inherent contradictory nature here.” However, many scholars had expressed different and contrary views on this concept.

On the contrary, the dystopian concept was proposed by John Stuart Mill in one of his 1868 Parliamentary Speeches i.e., by adding the prefix “Dys” to Utopia and the amalgamation of both the words turned into Dystopia.  By taking the literary meaning of the dystopia, it can be characterized as a cataclysmic decline of society with a dominant element of dehumanization. Politically, the same can also be characterized as a drastic transformation from normal to perverted (tyrannical) government. By going through the various literary works of scholar/authors like Aldous Huxley (Brave New World -1932); George Orwell (Nineteen Eighty-Four, 1949); and Ray Bradbury (Fahrenheit 451, 1953), one can be very easily familiarized with the characteristics’ of such dystopian society.

COVID-19 and the Dystopian World

As far as politics is concerned, the COVID-19 had left indelible imprints on global politics. It has caused the suspensions of legislative activities and even the rescheduling of general elections in the anticipation of spreading the virus.  As per the report of Economist (23 April, 2020), about  84 countries had declared a state of emergency in the backdrop of COVID-19 and rulers have been turning into autocrats by using pandemic  as an excuse to turn democracy into dictatorial kind of governments. More than 38 countries have imposed severe restrictions on the media. Economist (23 April, 2020) claimed that during the pandemic time, the autocrats had exploited the disaster as an opportunity to strangulate the democracy by banning mass protests and ruling by the decrees. Selectively, the political opponents have been put under enforced lockdown. It is widely reported that the relief packages/materials/payments have only been provided to the political supporters. Feldstein (31 March, 2020) has argued in his report that, COVID -19 has created a situation like a big brother is watching   you. Using COVID-19 as a pretext for tracing, testing and treating, a sophisticated technology is being used by many countries to monitor each one of us, causing set back to individual privacy. COVID-19 had left tumultuous shivering in the international relations. The division between Europe in North and South; strategic tension between the US and China; Japan-South Korea, Sino and neighbouring countries portending ominous signals for the changing global world order. Federalism is being eroded. Hungarian Prime Minister Viktor Orban got the right to rule the country by decree for an indefinite period.

As per the official website of the UN Department of Economic and Social Affairs (UNDESA), the COVID-19 had impacted every segment of the society. The COVID-19 has become detrimental and continues to affect the vulnerable segments of society such as poor people, older persons, and persons with disabilities, youth, indigenous peoples and of course minorities. The socio-economic and health impacts are being borne disproportionately by the poor people. The homeless people are highly vulnerable to the virus.  Poor people without basic necessities like food security/ safe drinking water and human security and migrants particularly from the poor countries have exposed to the vulnerabilities of the pandemic. Xenophobic and racial discrimination treatment meted out to the minorities/black people have become the part and parcel of the global society. These vulnerable sections have been suffering disproportionately from the double whammies on part of the pandemic, lockdown, unemployment etc. It is anticipated that the pandemic would lead to unimaginable inequality, poverty, social exclusion etc.

Recently one report has been published by the UN on violence against the women and girls in which it is anticipated that domestic violence would likely to deteriorate further more. In the backdrop of outbreak of COVID-19, the domestic violence against women has been increased exponentially. The cases of domestic violence in France have increased by 30 %. The increased use of helpline at the rate 25%, 30% and 33 %  in Argentina, Cyprus and Singapore respectively have shown how the domestic violence has been moving upward. The reports from various sources like governmental authorities, women’s rights activists and civil societies had reported the cases of domestic violence in countries like In Canada, Germany, Spain, the United Kingdom, and the United States, India etc. Apart from domestic violence, the COVID-19 has put the entire social system at an inflicting point severely impacting the social system and social values. What can be more than that when the family members had denied to receive the dead body from the hospitals and even refused to perform the last rites of the dead due to corona?  The majority vs minorities have been put on loggerheads and tenterhook.

Thus, from the above discussion, it is crystal clear that the COVID-19 had come as a black swan event. It had left wider ramifications in terms of politics, economic, social etc. Politically, most of the countries have been turning into dictatorial kind of regimes being characterized in terms of imposing of emergency, banning/restricting of media, banning mass protests etc. Crimes, corruption, violence against women and girls have been increased exponentially. Social system has been experiencing decline/rupture. Social values have been reached at the lowest ebb. Therefore,  COVID-19 world likely to become dystopian world.