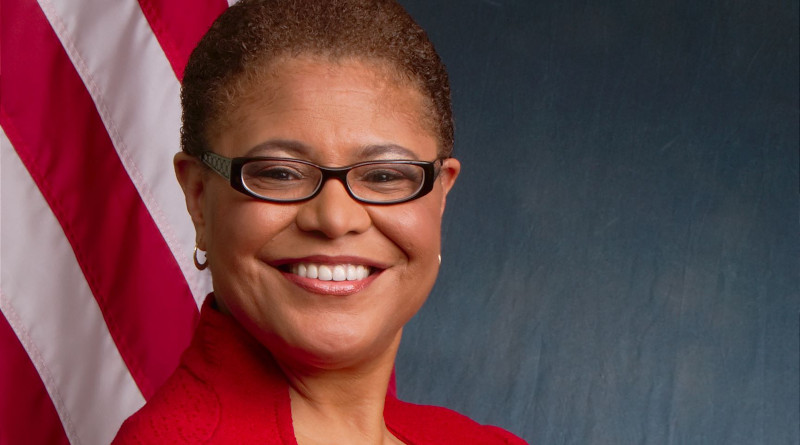 “N’COBRA’s [2019] Convention was largely aided by the Nation of Islam. The NOI provided press, promotional and technical assistance before and during the convention and live streamed most of the activities,” black weekly newspaper The Chicago Crusader reported at the time.

Biden has already promised identity politics-obsessed Democrats that he will tab a female for the Number Two slot on his ticket. With the outrage over the death of George Floyd in police custody still roiling the nation, pressure has mounted for him to select a black woman. Liberty Nation reported June 11 that Atlanta Mayor Keisha Lance Bottoms, also being vetted by Team Biden, twice touted “revolution” at two forums hosted by agents of notorious globalist billionaire George Soros’ Open Society Foundations.

Bass, who chairs the Congressional Black Caucus, is a co-sponsor of HR 40, a reparations bill for the descendants of American slaves. N’COBRA has dedicated itself to passing a reparations bill since its creation in 1987. “The 1989 issuance of HR 40 continues to be a prophetic pronouncement of what the United States of America must do to address its Achilles heel of systemic racism that continues to haunt and undermine the nation’s entire psycho-social, political, religious and economic fabric and future,” a N’COBRA “primer” on the history of the proposed legislation states.

N’COBRA is a black nationalist organization that believes the continuing fallout from slavery is the source of all problems plaguing the black community today. Even news that black Americans are reportedly more prone to be affected by the Coronavirus is attributed to genetic corrosion caused by slavery. “Due to the transgenerational epigenetic injury-the forced removal from Africa, a slave diet that consisted largely of cornmeal and fat, and 500 years of terror-Black people are highly susceptible to develop, at some point in their lifetimes, major diseases and life challenging illnesses than other ethnic groups in America,” the group states on its website.

Bass and Booker will be appearing at a panel discussion on the status of HR 40 and a companion Senate bill proposed by the New Jersey Democrat and former presidential candidate. The panel will also highlight “city and state initiatives in creating Reparations Commissions,” a breakdown of the conference reads.

Farrakhan was the unabashed star of N’COBRA’s 2019 conference. Besides allowing him to give the keynote address, the organization bestowed upon the extremist minister its “President Imari Obadele & Queen Mother Audley Moore Reparations Lifetime Achievement Award.”

America A Nation Of “Devils”

The theme of Farrakhan’s speech was seeking “full repair” for the damage blacks have suffered in America since its earliest days. As usual, the Nation of Islam ideologue minced no words.

“You were under thieves and liars for over 400 years and they made us into themselves,” Farrakhan said. “So, when you look at Black people, you’re looking at a creature made in America, made devils because that’s what the enemy is, and he could not make you righteous because righteousness is not a part of his nature. We have been under them so long they have made us into themselves.”

Before the event, N’COBRA “national male co-chair” Kamm Howard told The Final Call, a media outlet affiliated with Farrakhan, that the purpose of the conference was to stress that reparations were about far more than money.

“We’re focusing on what we define as ‘full repair,’ ” Howard declared. “A lot of people don’t have a clear idea of what reparations is especially in light of all the presidential candidates’ talk that is steadily being generated around reparations. N’COBRA understands that reparations means full repair of our people.”

As Americans witness the toppling of monuments and attacks on the honor of this nation’s Founding Fathers, it is important to note the all-encompassing nature of the “reparations” demands that Bass and Booker are openly aligning themselves with.

“Reparations, alone (a check in the mail), is not enough,” N’COBRA states in an article on its site concerning a meeting with leftist Jesuit priests on the alleged historical guilt of the Roman Catholic Church on slavery. “There must be a pre-figured process to negotiate a mechanism with the state, the church, and the academy, to address the full scope of the injury, past, present, and future,” the post continued.

“Chattel Slavery robbed us of our culture and the ability to achieve self-determination. Fundamentally, slavery in the United States defined enslaved Africans and their descendants without the humanity of Peoplehood, dignity, and divinity.”

That last word echoes Farrakhan’s bizarre beliefs on black supremacy. “Until we rise and until we are returned to our Original State the earth will be in convulsion. But when we are purified from our 400-year sojourn under an enemy, then we can purify everything else that came from us,” the minister said in his 2019 N’COBRA address.

“Then it will be one world again and peace will reign because the Black man is awake, is resurrected, is restored, is repaired and is back on his post as the Original Man, the Cream of the Planet, and the absolute God of the Universe.”

Joe Biden is intentionally seeking out a running mate based on what that person is rather than who he or she is. By narrowly focusing on a progressive black woman rather than trying to unearth the best candidate available, he is opening the door for dangerous radicals to wield power over his campaign.