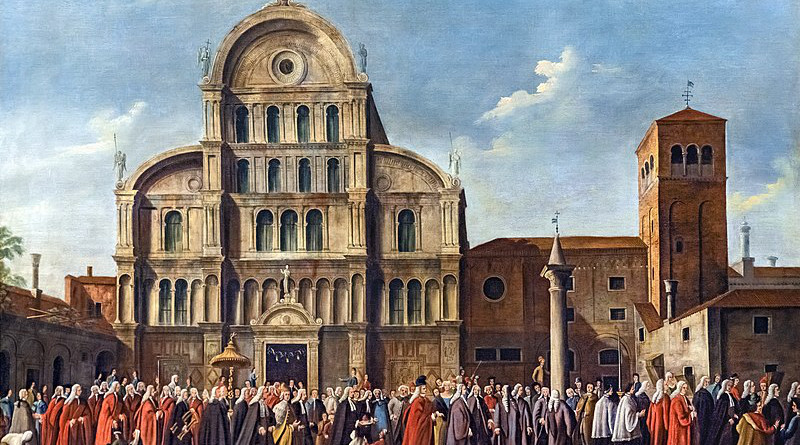 The splendid church of San Zaccaria in Venice has always been studied for the architectural magnificence of its Renaissance marbles and for the treasures it preserves: Bellini, Tiziano, Tintoretto, Palma il Giovane. However, just as interesting is the history of the female monastic community that lived in the nearby cloister.

This has been the subject of a study by Anna Maria Rapetti, Professor of Medieval History and of the History of the Medieval Church at Ca’ Foscari University, in her article “Uscire dal chiostro. Iniziative di riforma e percorsi di autonomia di un monastero femminile (Venezia, XII secolo)” (Leaving the cloister. Reform initiatives and paths to autonomy in a female monastery (Venice, 12th century)) published in the journal Reti medievali.

“The research,” explains Anna Maria Rapetti of the Department of Humanities, “shows the importance of female presence and action in past societies, even in cultures that common sentiment considers strongly misogynistic, and in particular the driving role of the female component of medieval monasticism, not only in the religious and spiritual sphere, but also in the social and political sphere.”

The documents kept in the State Archive belonging to San Zaccaria tell us in particular of a land transaction and of the direct participation of the nuns, guided with the firm and energetic hand of their abbesses, in the monastery reform initiatives in the second half of the 7th century and reveal the resourcefulness of a group of women who lived inside this large and ancient Venetian female monastery, which was traditionally used as a home for the daughters of the Dogado aristocracy, among other things.

“In an environment governed by strict rules,” continues Rapetti, “which limited the freedom of initiative and even the movement of women who had taken the veil and, through love or by force, had become nuns, and in an era considered, not without reason, deeply misogynist, we see these women acting as an organized and coordinated community of people whose names and surnames we often know (and it is a very rare element for this time).” The documents tell us about the Abbess Casota Caisolo, who acts on behalf of the institution and the community of nuns, and another four assistant nuns, Emerienziana, Celestina, Calandria, Imilia, people in flesh and blood who come to life in the parchments,giving us an insight into episodes of real life.

These women find their fulfillment not individually, in the prayer and silence expected from those who have retreated to within the walls of a cloister, but in the project shared and collectively pursued to increase the prestige and influence of their monastic community, above all through the connection to the very powerful Burgundian Abbey of Cluny and the adoption of its Customs.”

In the period following this affiliation, the nuns were able to build a support network, a web of social relations with powerful, ecclesiastical and secular men, near and far: the Doge, the Patriarch, certain Venetian aristocrats, but also the Abbot of Cluny, and even – perhaps – the Pope. Rapetti underlines how the nuns were the real architects of that project to relaunch their San Zaccaria, planning with care, intelligence and attention to aspects of communication.

In fact, we find them mentioned in the notarial documents relating to an important land transaction (concerning the funds located in the territory of today’s Ronco all’Adige, in the Veronese district) that the nuns had negotiated and agreed with a respectable interlocutor, namely the municipal authority of Verona, a very important city in that period.

The document of 22 December 1195 struck the scholar because, at a time when women had no political space, in which it was believed that nuns had, at best, only limited possibilities of movement and influence, the nuns of San Zaccaria instead prove to be the true architects of the relaunch of the monastery, personally appearing in Verona in the person of the Abbess and four nuns and, where necessary, even violating the obligation of the cloister that confined them within the monastery walls. They deal directly with the Podestà of Verona and with the main municipal authorities, judges and consuls, flanked by the Venetian delegation, managing to conclude an agreement that is of great importance not only for San Zaccaria, but also, politically and strategically, for Venice

They demonstrate strategic capacity, autonomy of action and entrepreneurial ability that was believed to be the prerogative of the male world only; they know how to negotiate their business directly, even in complex situations, they are able to manage economically the monastery’s assets and have the capacity to renew administration.

“In this document,” concludes Rapetti, “we thus see the journey of consolidation achieved by the ancient monastery and its ability to position itself as an authoritative political entity among other entities, primarily to defend and promote its own specific interests, but also those of the motherland.”

Home » Monastery Of San Zaccaria: A Story Of Strong Women In The Middle Ages