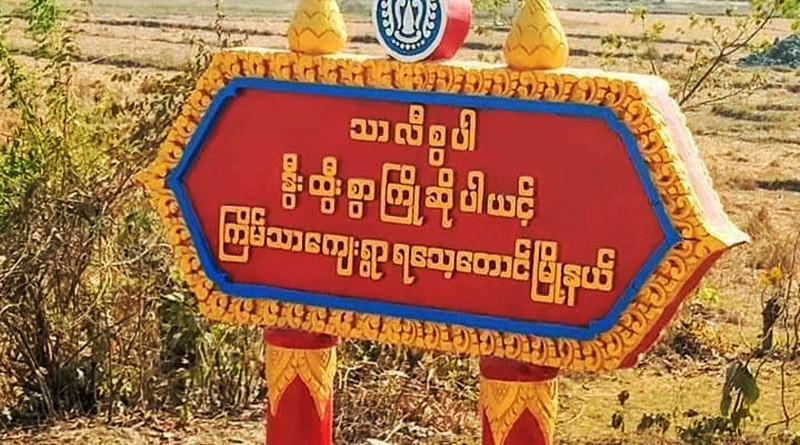 At least two homes in Kyein Thar village, in Arakan State’s Rathedaung Township, were set ablaze at about noon on June 26, according to locals.

Residents were in the process of fleeing their homes for fear of being arrested when a military column entered Kyein Thar village after fighting broke out between the Tatmadaw and the Arakan Army on June 24 near Pyar Chaung Gyi Bridge, outside of the village.

“The military regiment arrived in the village since June 24. Security personnel conducted interrogations of elderly people at the village monastery and school on suspicion of having links to the Arakan Army. They [security personnel] summoned the village’s administrator and set fire to the village because he didn’t come,” said a villager who declined to be named.

Two houses near the village administrator’s residence in the northern part of Kyein Thar went up in flames, residents said.

“We saw that two houses near the village administrator’s residence were set on fire. We don’t know the reason why the houses were set ablaze but a military battalion was stationed in the village,” another unnamed villager said.

DMG phoned Brigadier-General Zaw Min Tun and Major-General Tun Tun Nyi from the Tatmadaw True News Information Team seeking comment on the incident, but they could not be reached.

Kyein Thar village was also in the news earlier this week when the Arakan Army abducted three sons of military personnel from Light Infantry Battalion No. 536 on June 24 while they were travelling to the village, according to the Tatmadaw True News Information Team. The Arakan Army acknowledged in a statement on June 25 that it had detained the three young men, who it said had gone looking for a drone belonging to the Tatmadaw.

The military has warned residents of Kyauktan village and its surrounding environs in Rathedaung Township to temporarily leave their homes as it plans to launch “clearance operations” against the Arakan Army in the area. Fighting between the two sides began near Kyauktan village on the morning of June 26, locals said.