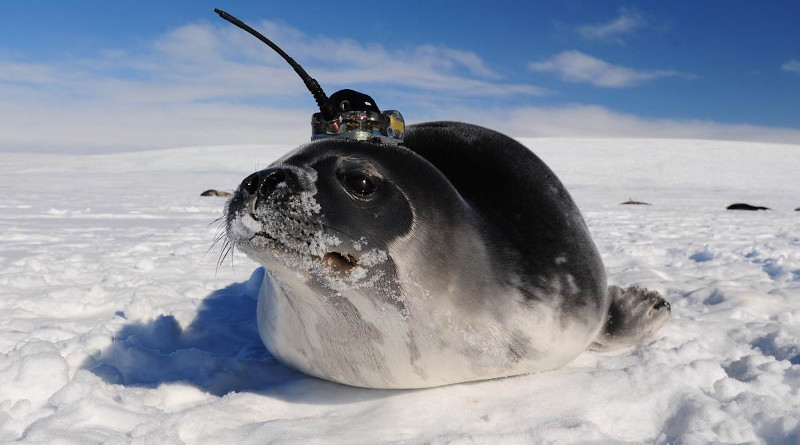 A Weddell seal collects data in the ocean while swimming. This information doesn’t only help marine sciences researchers, but also biologist, to understand the seals’ habitat better. (With permission: Dan Costa.)

Using state-of-the-art ocean robots and scientific sensors attached to seals, researchers in Marine Sciences at the University of Gothenburg have for the first time observed small and energetic ocean currents in the Southern Ocean. The currents are critical at controlling the amount of heat and carbon moving between the ocean and the atmosphere – information vital for understanding our global climate and how it may change in the future.

Two new studies, one led by Associate Professor Sebastiaan Swart and the other led by Dr Louise Biddle, both working at the University of Gothenburg, use highly novel techniques to collect rare data in the ocean both under and near the sea ice surrounding Antarctica (www.roammiz.com).

These papers present for the first time upper ocean currents of approximately 0.1-10 km in size. These currents, which are invisible to satellite and ship-based data, are seen to interact with strong Southern Ocean storms and with physical processes occurring under sea ice.

“Using the data collected by the seals, we’re able to look at the impact these upper ocean currents have underneath the sea ice for the first time. It’s a really valuable insight into what was previously completely unknown in the Southern Ocean,” says Dr Louise Biddle, Department of Marine Sciences, University of Gothenburg.

The winter had assumed to be a “quiet” time due to the dampening effect of sea ice on the ocean’s surface. However, the two studies show that these upper ocean currents have a significant effect on the ocean during winter.

Some of the findings by Sebastiaan Swart and his team gives further insight how these observed ocean currents work.Their study highlights that during times when there are no storms and winds are weak, upper ocean currents start to become much more energetic. This energy enhances the rate of ocean mixing and transport of properties, like heat, carbon and nutrients, around the ocean and into the deep ocean.

“These new ocean robots, so-called gliders, which we control by satellite for months at a time, have allowed us to measure the ocean at unprecedented high resolution. The measurements have revealed strong physical linkages between the atmosphere and ocean. It’s pretty amazing we can remotely ‘steer’ these robots in the most far-flung parts of the world – the ocean around Antarctica – while collecting new science data,” says Associate Professor Sebastiaan Swart, Department of Marine Sciences, University of Gothenburg.

Together, these studies contribute to improving our understanding of small-scale ocean and climate processes that have impacts globally. These kinds of observations are a critical knowledge gap in the ocean that has an impact on various processes occurring at global scale, such as ecosystems and climate.

“We are excited to grow this research capability at the University of Gothenburg. This is really a world-leading direction we should be taking to collect part of our data in marine sciences,” says Sebastiaan Swart.