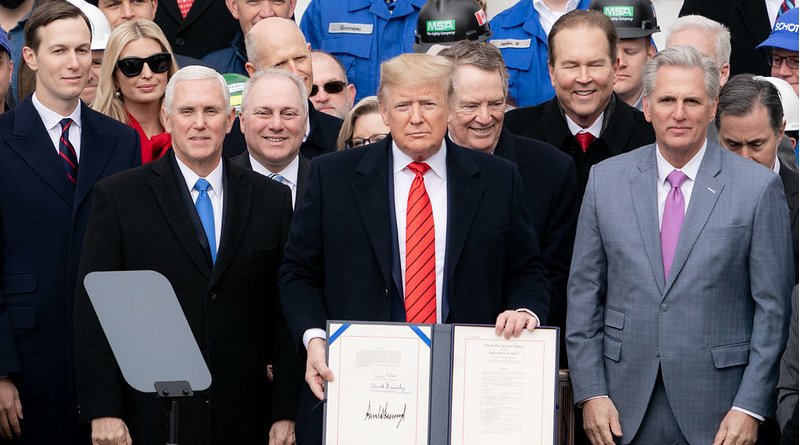 The new US-Mexico-Canada agreement (USMCA), one of the most comprehensive trade agreements outside the EU, comes into force on Wednesday. While the deal remains shrouded in political controversy, it underlines the limits to the current de-globalization era fueled by the coronavirus pandemic.

The USMCA, in effect a North America Free Trade Agreement (NAFTA) 2.0, will be a political cornerstone of economic relations on the continent, including more than $1 trillion in annual trade. But amid the celebrations of what even “America First” President Donald Trump has called a “wonderful” and “historical transaction,” there remains much political angst.

NAFTA, originally signed in 1994 during Bill Clinton’s presidency, was the first major trade accord between a developing country (Mexico) and developed countries (the US and Canada). In that distinctive era, soon after the end of the Cold War, economic globalization was largely unchallenged as a political orthodoxy across much the world.

Reflecting the erosion of political support since then for international trade, in 2016 Trump called NAFTA “the worst trade deal maybe ever signed anywhere.” In the US, the political right and left have both blamed it for contributing to a hollowing out of the US manufacturing industry, partly because of increased trade deficits with Mexico and Canada. That is why Trump has given the pact a branding refresh to the USMCA, ending what he calls the “NAFTA nightmare,” despite the major continuities between the two.

A sign of this troubled political landscape came last Wednesday when, even before the USMCA agreement takes effect, US trade chief Robert Lighthizer threatened Canada and Mexico with litigation. Amid US election-year pressures over international trade, Lighthizer’s strongest warning was directed at Mexico; he said it needed to implement the improved worker rights it agreed to in the deal, and “we will take action early and often when there are problems” so as not to allow a competitive advantage over the US.

Canada was also in his sights over opening up its domestic dairy market, and he claimed that Ottawa had a history of playing games that effectively shut out foreign competitors even after a trade deal was reached. This is a key issue for US farmers, another key voter bloc in several swing states in November, and Lighthizer asserted that “if there’s any shading of the benefits to American farmers, we’re going to bring a case.”

US election issues aside, what Wednesday’s intervention underlines is that, despite Trump’s self-proclaimed negotiating genius, the new USMCA will continue to present political challenges in the US, partly of his own making. To be sure, the deal contains wins for the US, including the limited (but not full) opening of Canada’s dairy markets.

But Washington compromised too, acceding to Ottawa’s request to preserve a trade dispute settlement mechanism while protecting Canada’s auto industry from further US tariffs. The renegotiation was not therefore the huge political win he asserts and, having oversold the extent of the NAFTA makeover, he now therefore needs to avoid political attack from Democrats before November.

The political controversy over USMCA extends beyond the US to Canada and Mexico, which were traditionally enthusiastic about NAFTA. In part, this is because Trump eroded much goodwill with both countries after more than a year of acrimonious USMCA negotiations that left a sour taste.

Trump put Canada under intense pressure, posing an acute dilemma for Prime Minister Justin Trudeau’s administration, because NAFTA underpins three quarters of Canada’s exports to the US and 2.5 million Canadian jobs depend on that trade. Trump references to Ottawa’s “decades of abuse” of Washington alarmed a significant number of representatives in the US Congress who recognize the importance of strong relations with their northern neighbor.

Amid all this political wrangling, the fact is that the little-loved USMCA could now help drive North America’s economic recovery from the coronavirus recession. The scale of the downturn in the continent is underlined by data that shows the value of freight hauled across the US, Canada and Mexican borders decreased in April by the largest amount since records began — reducing more than 44 percent compared with April 2019.

There is clear acknowledgement in the White House, despite Lighthizer’s comments, of the importance of USMCA to reigniting the economy. As Trump’s economic adviser Larry Kudlow said: “Canada and Mexico are very important trade partners. The new North American free trade accord is … going to add quite a lot to GDP and jobs.”

This underlines the perils of the election campaign tightrope that Trump must now walk as he seeks to stimulate economic growth while avoiding political attack over trade issues. It is surely one of the biggest paradoxes of his presidency that his re-election hopes may now rest, in part, upon the success of a reheated NAFTA deal that he previously asserted was the worst trade deal ever negotiated.