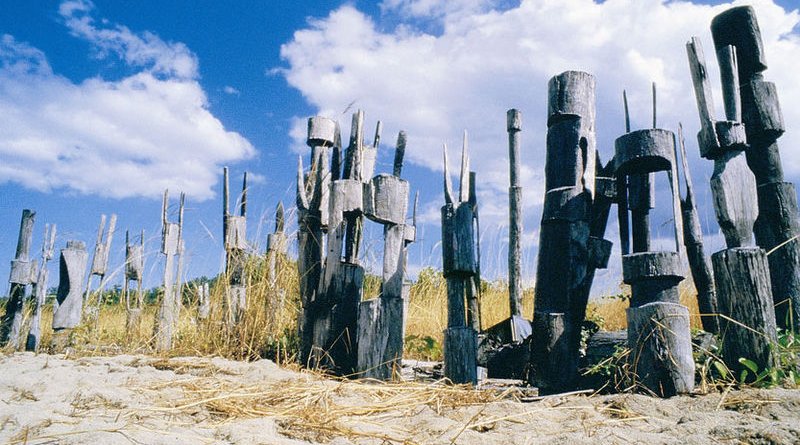 (Darwin, Northern Territory) — Lush mangroves, the spray of emerald water from the Timor Sea, the sense of the untainted: the journey to the Tiwi Islands, some 80 kilometres north of Darwin, was crudely advertised as one of the Things to Do in the Northern Territory. “Take the opportunity to have a truly fantastic day out. Visit Bathurst Island for this special day and a chance to view and buy Tiwi Island artwork and watch the grand footy final.”

The ferry service seemed a sloppy operation. Locals heading back to the Tiwi Islands new something visitors did not: do not bother pre-purchasing tickets. Do them on the day itself, and avoid the queue. On getting to Bathurst Island, the elegant wooden structure that is St. Therese’s Church is swarming with worshippers and guests: a wedding is about to take place.

Background reading on the Tiwi Islands lends one to squirming discomfort. They are glossily advertised as singular in their indigenous quality. But this count soon unravels. The populace on both islands, Bathurst and Melville, became witness to both the Catholic Church and the obtrusive efforts of roughing pioneers of the British Empire.

One such figure was Robert Joel Cooper, a figure who looks like a man who killed everything he came across. Anybody termed a pioneer in this particularly harsh environment would have to have a certain acquisitive tendency. What was seen, witnessed and met had to be possessed. His grave stone in Darwin’s ill-kept Gardens Cemetery suggests the flavour, reminding us of his known title of “King Joe of Melville Island”, “a man of courage and love for everyone”.

He had all the attributes of the ruthless frontiersman: patriarchy, a tendency to sow his not-so-royal oats, a capacity for a certain work regimen, a firm disciplinarian. He established the buffalo industry on Melville Island, extracting some thousand hides a year. He took an Aboriginal wife, Alice, in what seemed like a primordial gesture. One of his brood, Rueben, became a figure of sporting repute, adept and talented across a range of codes and ultimately minting history as a formidable player of Australian Rules Football, known colloquially in these parts as “footy”.

Cooper’s resume reads like that of any figure of conquest deemed important after the fact. His entry in the Australian Dictionary of Biography shows suitable wildness, with hints of admiration from the authors. Along with this brother George Henry (Harry) Cooper and pastoral lessee E. O. Robinson, he ventured to Melville Island “despite hostile Aborigines”. He did not seem discouraged in being speared in the shoulder; if anything, it emboldened him to “to abduct four Tiwi Aboriginals”. While such acts might well have been seen as those of a traditional looter of specimens and possessions, the authors of the entry condescend to suggest that he “treated his captives kindly and learned their language.” (The rough pioneer as accomplished linguist? Go figure.) In 1905, Cooper became the first “settler” since Ford Dundas was abandoned in 1828, using twenty Port Essington Aborigines to allay the fears of any locals as to what his intentions might have been. The ruse worked; he established his name.

Cooper’s profile matched like attitudes adopted to the indigenous populace more broadly speaking. They were there to be used, abused and infantilised, their autonomy relegated to the level of trinket exotica. Indigenous parenting was effectively disregarded: the Chief Protector in the Northern Territory, by virtue of the Northern Territory Aboriginals Act 1910, became the “legal guardian of every Aboriginal and every half-caste child up to the age of 18 years” irrespective of whether the child had parents or other relatives. This came with the power to confine “any Aboriginal or half-caste” to a reserve or Aboriginal institution. In the Aboriginal Ordinance of 1918, the clutches of the Chief Protector were extended to Aboriginal females from birth to death unless married and living with a husband “who is substantially of European origin”.

Cooper the hunter was also Cooper the connected figure. The Catholic Church, through the figure of Father Francis Xavier Gsell, was convinced by him to focus on neighbouring Bathurst Island to set up a Catholic mission. The good Father got to work, landing on Bathurst Island in 1911 and buying rights to marry Tiwi girls. Fiancées and fathers were won over (again, the message of seduction and appropriation are never far) with cloth, flour and tobacco. With due boastful extravagance, Gsell would recall his time on the island in his memoir, Bishop With 150 Wives.

The influence of Gsell and the church has become part of a formidable public relations exercise executed by the Vatican, masking the effects of what came to be known as inculturation. Publications of praise such as Australia: The Vatican Museums Indigenous Collection, conveys the impression of church guardianship and preservation of Tiwi tradition. No tincture of irony is present in the work. The collection itself boasts an early set of Pukamani poles (tutini) from the islands, grave posts that had made their way into church possession.

Anthropologists were not be left out of the stealing game, and German anthropologist Hermann Klaatsch, the first anthropologist to successfully make his way to Melville Island on September 20, 1906, recounted several feats of theft of Pukamani poles, lamenting that, “due to the smallness of my boat I could not transport more examples.” The penny, he was relieved, never dropped. “Luckily, we remained unnoticed by the blacks in our grave violating enterprise.”

The account might have been somewhat different. A certain Harry Cooper, no less the brother of Joe, may well have distracted the islanders by firing shots over their heads while Klaatsch did his deed. “There, that sounds more like it,” wrote Marie Munkara acidly.

The lingering Catholic presence, through immersion with Tiwi custom as both imposition and adjustment, has left its own traumas. The missionaries used “psychological warfare”, insists Munkara, a process which “corroded our ancient beliefs.” And much more besides.

Having assumed the role of converters and educators, the Church mission on Bathurst Island would eventually be shown in its ghastly manifestations. Protectors, whether religious or secular, became ready abusers. In 1993, claims that some 40 children who had been to St. Xavier’s Boys’ School on Bathurst Island had been sexually abused by Brother John Hallett were reported. Two years later, he received a five year jail sentence, one quashed five months later by the Northern Territory Court of Criminal Appeal.

Cooper’s circle of intimates supplies a direct line to the spoliation of the Tiwi Islands, but more broadly, the indigenous population in the Northern Territory. Professor W. Baldwin Spencer, the anthropologist who became Chief Protector in 1912, stayed with the King of Melville Island at stages in 1911 and 1912 as he was conducting his own investigations. There was a meeting of minds: one appropriator to another.

Spencer’s 1912 report furnished the natives with a terrifying vision, executed with brazen cruelty towards children who had, by law, been executively entrusted into his care. “No half-caste children should be allowed to remain in any native camp, but they should all be withdrawn and placed on stations.” The mother should, as a matter of necessity, accompany the child “but in other cases, even though it may seem cruel to separate the mother and child, it is better to do so, when the mother is living, as is usually the case, in a native camp”. Unsurprisingly, Cooper, having obtained the confidence of Spencer, would himself be deputised in this less than protective role.

Visiting the Tiwi Islands has the discomforting effect of moving around in a historical zoo. The islands are haunted by Church, the Coopers, and civilizational predations. While the idea of the reserve is now regarded as a vestige of administrative barbarity, the Tiwi message and advertisement is one of false purity and the deceptively unspoilt. This has the effect of a museum feel with damaged artefacts. The wondering tourists with heavy wallets, backpacks, hats and sunscreen resemble the plundering pioneers of old. This time, instead of abducting native residents and doing a spot of grave robbing, they prefer to purchase the art.

Idealisation becomes hard to ignore; the spectator and viewer effectively participate in an exercise of unwarranted elevation and the words of Klaatsch in his Ergebnisse meiner australischen Reise (1907) come to mind. “When you see the black man walking by, with his erect posture, his head decorated with feathers, with the spear in his right hand, then who cannot help form the impression that you have a ‘savage gentleman’ in front of your eyes, a king in the realm of the surrounding nature, to which he is so well adapted.”

The brochure language does little by way of improvement on Klaatsch’s observation. In fact, it replicates it as a timeless fib, a gallery caption. Instead of the “Island of Smiles”, you are greeted by dazed wanderers of the walking wounded playing out a distorted cultural play. In 1999, attention was brought to the fact that the Tiwi Islands was facing a suicide epidemic. The then resident medical practitioner, Chris Harrison, noted a number of instance: 100 attempts, meaning that 1 in 16 or 1 in 20 on the islands had attempted some form of suicide. Nothing to smile at, let alone induce cheer.

When suggestions were made that such rates might be attributed to the influences, amongst other things, of the Church and its predatory practices, officialdom fumed. As then Bishop Ted Collins explained with irritation, “I think they’re trying to put the blame somewhere outside the people rather than acknowledge that it’s happening within the people.” How ungenerous of them to think otherwise.

Beside the Bathurst Island cemetery are two men, seemingly hypnotised, finding shelter under a lonely eucalypt. They gaze aimlessly at a billy boiling over a roughly made fire. There are no fragrant smells of cuisine, no sense of culinary wonder. Instead, there is a distinct sound of eggs clanking against the rim, no doubt hard boiled to oblivion. On the island, there are no food markets or stalls of fresh produce. Food items, canned and frozen, are imported. It is the afternoon, and the islanders migrate from their homes to the various shady spots under suitable vegetation. Lit fires across the island send their bluish plumes towards the sea. The church, in its wooden majesty, is quiet but for the whirring fans. The guests have left, the singing done. We leave Bathurst Island with a sense of loss, and not a smile in sight.