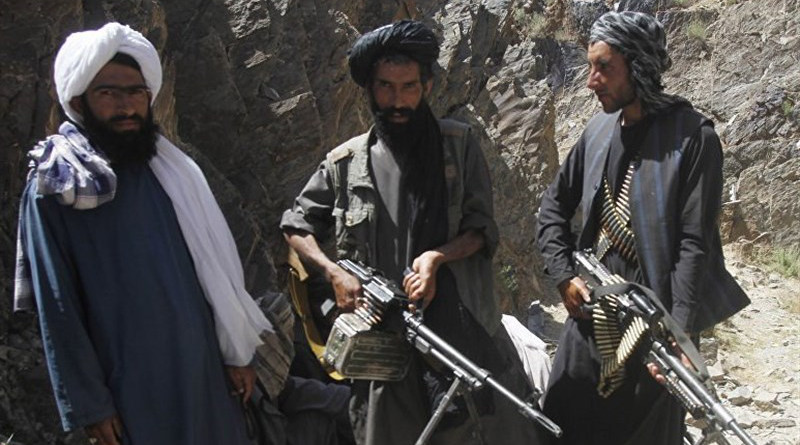 On July 24, 2020, four Afghan National Defense and Security Forces (ANDSF) personnel were killed and four were injured in a Taliban attack on their outpost at Kharistan village in Ghor Province.

On July 21, 2020, seven ANDSF personnel were killed when the Taliban attacked security checkpoints in Takhta Pul District of Kandahar Province.

On July 20, 2020, eight ANDSF personnel were killed and nine others were injured in a suicide car bombing in the Sayed Abad District of Maidan Wardak Province. The Taliban claimed responsibility for the attack.

On July 20, 2020, eight ANDSF personnel were killed and five others wounded when Taliban militants attacked their checkpoint in the Shinwari neighborhood of Kunduz city, the provincial capital of Kunduz Province.

On July 16, 2020, nine ANDSF personnel were killed in a Taliban attack in Dawlat Abad District of Balkh Province.

On July 13, 2020, 14 ANDSF personnel were killed and two were wounded as the Taliban stormed the Security Forces’ (SFs’) checkpoints in Imam-Saib and Chahardara Districts of Kunduz Province.

The SF fatalities figure of 529 since February 29, 2020, however, are likely to be grossly underestimated. Indeed, Jawid Faisal, a spokesman for the Office of National Security Council (ONSC), on June 22, 2020, tweeted,

The past week was the deadliest of the past 19 years. Taliban carried out 422 attacks in 32 provinces, martyring 291 ANDSF members and wounding 550 others. Taliban’s commitment to reduce violence is meaningless, and their actions inconsistent with their rhetoric on peace.

A report dated July 23, 2020, said that according to the statistics provided by the Afghan Government, after the US-Taliban agreement, 50 security incidents took place per day on average in Afghanistan. The Government data shows that the Taliban and other anti-Government groups are behind 40 attacks a day while the other 10 are attributed to the ANDSF and Operation Resolute Support forces.

According to a UN report released on June 17, 2020, between February 7 and May 14, 2020, United Nations Assistance Mission in Afghanistan (UNAMA) recorded 5,543 security-related incidents.

According to the Afghanistan Independent Human Rights Commission (AIHRC)’s report on civilian casualties published on July 14, 2020, on average 16 civilians have been killed or wounded every day across the country in the first half of 2020. A total of 1,213 civilians have been killed and 1,744 wounded in 880 separate incidents during the first six months of the year, according to the AIHRC’s report. The AIHRC said Taliban attacks were responsible for 48.5 per cent of the recorded civilian casualties. Government forces are behind 15.5 per cent of the casualties, the Islamic State, 6.3 per cent, and international forces 2.3 per cent. Attacks by unknown perpetrators accounted for 26.7 per cent of the casualties.

There have been rising reports of security threats to the country’s main highways. The Herat – Islam Qala Highway, a key highway used to transport most of the imports from Iran remains unsafe for passengers, Government officials and commercial trucks, due to the presence of terrorists. Yunus Qazizada, head of the Chamber of Commerce and Investment in Herat, observed on April 25, 2020, “We are tired of the lack of security on Herat – Islam Qala Highway. Businessmen cannot travel on this highway.”

On July 6, 2020, Afghan Security Forces clashed with the Taliban at multiple parts of the Baghlan – Balkh Highway, a key route that connects Kabul with the northern and north-eastern Provinces. The clashes started after the Taliban installed a ‘checkpoint’ on the Baghlan-Balkh Highway in the Chashma-e-Shir area and started extorting funds from truck drivers. 16 Taliban militants were killed in the clashes.

On July 7, 2020, Afghan Security Forces had a fierce battle with the Taliban on the Pul-e-Khumri – Samangan highway after the insurgents tried to block the road. Seven Taliban militants were killed in a fierce battle.

Meanwhile, the eleventh report of the Analytical Support and Sanctions Monitoring Team of the United Nations (UN), released on May 27, 2020, stated that the Taliban had failed to fulfil one of the core parts of the US-Taliban agreement, namely that it would break ties with Al-Qaeda. Al-Qaeda has 400 to 600 operatives active in 12 Afghan Provinces, and is running training camps in the east of the country, according to the report. On July 13, 2020, seven ANDSF personnel were killed and two others were injured in a joint assault by the Taliban, Al-Qaeda and the Islamic State on a checkpoint in the Arghanjkhwa District of Badakhshan Province.

Unhappy over the deteriorating security situation, some Meshrano Jirga (House of Elders) members expressed their concerns over growing incidents of violence in the countryon July 5, 2020. Nabia Mustafazada, a lawmaker from Jawzjan Province, noted, “The security situation deteriorates with each passing day, there is instability in the centre and districts. People are worried due to insecurity, targeted attacks, blasts and worsening economic condition.” Similarly, Gul Ahmad Azeemi, a lawmaker from Farah Province, argued, “Individuals who want to sabotage peace process should be stopped; otherwise peace will not be restored in the country.” Meanwhile, the Chairman of the House, Fazal Hadi Muslimyar, observed, “Government and the people of Afghanistan wanted peace but violence should decline and people on both side working against peace should be stopped from their designs.”

Emphasizing the continuing violence by the Taliban, President Ashraf Ghani, while speaking on the first day of the four-day meeting titled “Strengthening Regional and International Consensus” attended by representatives of at least 20 countries and international organizations, including the United States and the UN in Kabul on July 7, 2020, warned that “the peace process will face serious challenges if the Taliban continue the war.” Similarly, on July 10, 2020, Abdullah Abdullah, head of the High Council for National Reconciliation, at the end of the four-day meeting, criticized the Taliban for not ending violence in the country and thus preventing the peace process from moving forward. Criticizing the Taliban for the escalating violence, Presidential Palace spokesman Sediq Sediqqi tweeted on July 12, 2020,

The recent escalation of Taliban violence in cities, attacks on security forces, roadside bombings and targeting government employees have damaged the hopes and expectations of the people and the international community for dialogue and making peace. It is time for the Taliban to renounce violence and enter the peace process in a real way.

Meanwhile, rejecting the call for reduction in violence as a precondition to start the intra-Afghan talks, Taliban spokesman Zabiullah Mujahid declared, on July 12, 2020, “The prisoner exchange process must be completed and intra-Afghan negotiations launched immediately. This is the most correct and reasonable path towards a resolution.” Once again, blaming the Afghan Government for delays in the intra-Afghan negotiations, Shahabuddin Delawar, a key member of the Taliban’s office in Qatar, speaking during a virtual discussion with other Afghans, on July 19, 2020, asserted, “The responsibility of all bloody incidents over the last four months is on the Afghan government because it should have released our 5,000 prisoners by March 15. We were ready to release their 1,000 prisoners in 10 days.” Based on the peace agreement between the US and Taliban, Afghan Government is required to release 5,000 Taliban prisoners and the Taliban to release 1,000 Government prisoners, before the intra-Afghan talks. So far, the Afghan Government has released 4,250 out of 5,000 prisoners, and the Taliban has released 861 Government prisoners out of 1,000.

Revealing one of the main reasons for not releasing 597 of the 5,000 inmates that were to be freed as part of the confidence-building measures established in the US-Taliban agreement, Ahmad Rashid Totakhil, head of the General Directorate of Prisons, on July 5, 2020, stated, “Murderers are on the Taliban list and the government has resisted. It is a victims’ rights issue and the law does not allow releasing someone under the pretext of being a Taliban member, who is charged with murder or even moral crimes like rape.” The Afghan Government has asked the Taliban to provide a new list for the prisoners who have not been released so far, but the Taliban has insisted on the release of their prisoners based on the existing list. It is useful to recall that the Afghan Government was not a party to the negotiations or the deal in the US-Taliban peace agreement, and is now being forced to deliver on concessions made by the US.

Meanwhile, in defiance of their commitments not to re-join the war, a number of Taliban prisoners who were released by the Afghan Government have reportedly reintegrated with their colleagues on the battlefield. On July, 21, 2020, a Taliban fighter, identified as Shirullah also known as Captain, recently freed from Afghan Government custody as part of peace efforts, was rearrested in the Kofab District of Badakshan Province during an attack on the ANDSF. Again, on July 22, 2020, ANDSF personnel arrested two Taliban prisoners who had been released from the Bagram prison, while they were trying to stage attack on an ANDSF convoy on the Jawzjan-Balkh Highway. Jawid Faisal, a spokesman for the Office of the National Security Council (ONSC) on July 23, 2020, revealed,

The Taliban fighters signed on the papers and committed that they will not return to the war, regrettably some of these inmates have returned to the war fronts in defiance of the expectations of the Afghan people.

Condemning the Taliban for the surge in violence, US special representative on Afghanistan, Zalmay Khalilzad, asserted on July 14, 2020, “Violence has been high, especially in recent days and weeks. The Taliban’s attacks contradict their commitment to reduce violence until a permanent ceasefire is reached in intra-Afghan talks. “Similarly, describing the Taliban-led violence as unacceptable as efforts are underway to find a negotiated political settlement to the war in the country, North Atlantic Treaty Organization (NATO) Senior Civilian Representative in Afghanistan, Ambassador Stefano Pontecorvo, observed on July 21, 2020,

I would say that the main obstacle to peace now is the unacceptable level of violence from the part of the Taliban. This has been mentioned by everybody who takes an interestin Afghanistan and beyond. Taliban’s level of violence is absolutely unacceptable; they are not creating the conditions for getting to the Peace table. Taliban have to demonstrate that they are serious about peace.

The US-Taliban Agreement as well as the recent Eid ceasefire initiated by the Taliban have failed to reduce the violence. While calibrating violence may be part of the Taliban’s strategy to join the negotiations in a position of strength, the present escalation jeopardizes the entire peace process. Clearly, the Taliban’s calculus is shifting, even as it consolidates its relationship with the Al Qaeda, and makes a concentrated bid to seize control of widening swathes of the country. As the peace deal unravels, the imprudence of the US initiative and the hasty withdrawal of US Forces from Afghanistan is increasingly apparent. The Taliban’s aims have always been maximalist, its engagement in negotiations tactical and opportunistic, and its understanding of the weakness of its adversaries – both domestic and foreign – profound.