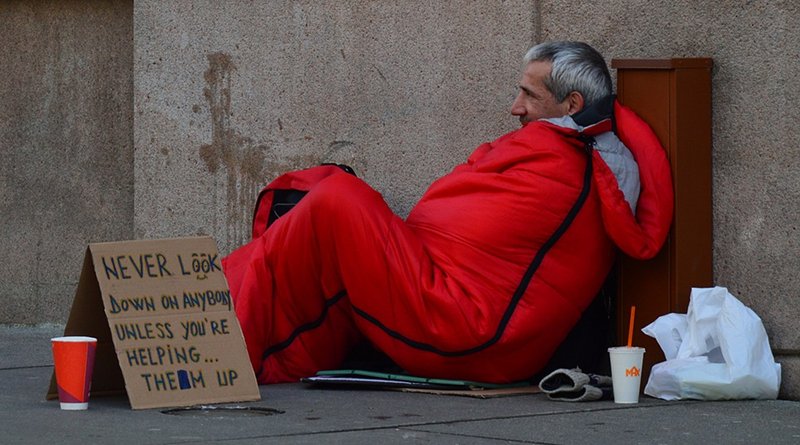 St. Mark and the Archdiocese of Los Angeles are not insensitive to the needs of the homeless. What concerns them is the building of a homeless shelter that is literally around the corner from the church and a Catholic elementary school.

An editorial in the Los Angeles Times is livid that the Church is offering resistance, saying “it is incomprehensible and disgraceful to see a church and the Archdiocese of Los Angeles fighting even a modest effort to get people permanently housed.”

Given its editorial perspective, it is entirely comprehensible, yet disgraceful, that the Los Angeles Times would play this shaming game. Would it be so quick to excoriate those affiliated with another religion—or those associated with a secular institution—for opposing the shelter? It admits that safety is a concern for those who live in the area, but it apparently does not mean much to them.

Maybe the paper should spend more time explaining why Los Angeles has such a serious homeless problem in the first place. Figures released last month, and reported by National Public Radio, show that 66,433 people live in the streets of Los Angeles County. This is up by 12.7% in one year. Why?

Two years ago, the Southern California public radio station, KPCC, did an investigation of the homeless in Los Angeles County. Why were 43,000 people sleeping in the streets in tents, cars and makeshift structures? “A KPCC investigation found reports of bedbugs, rats, foul odors, poor lighting, harassment, lax care in medical wards and even a ‘chicken incubator’ in a room where homeless people were sleeping.”

In other words, the homeless shelters are, as one occupant said, “dangerous as heck.” The KPCC report detailed “theft, harassment and even assault by other clients in shelters, and that staff were either indifferent to or untrained to handle the conflict.”

Just last September, the newspaper ran an editorial about the homeless in Venice that was totally fair. It accurately observed “the tension between the homeless and the other residents of the neighborhood there,” noting that there is a need to “balance the rights of the homeless with the needs of the city.”

So what broke? This editorial implies that the Catholics who live there, and who already service the homeless, are not acting unreasonably when they defend the needs of their parish and schoolchildren. Whoever wrote the editorial of July 26, 2020 should explain why those who wrote the editorial of September 11, 2019 were wrong.

As expected, the “open-minded” Hollywood crowd wants nothing to do with the homeless. The closest homeless shelter to City Center, Hollywood is a quarter mile away; one is a half mile away and another is three-quarters a mile away. There are seven located between a mile and 5 miles away; 24 are 5-10 miles away; and 21 are situated 10-15 miles away.

In the Hollywood Studio District there is a homeless hospice and there is a food bank located in Beverly Hills, but these are not the kinds of facilities that endanger innocent persons.

Why aren’t the diversity mavens at the Los Angeles Times railing against this kind of classist discrimination? Moreover, it sure looks like systemic racism. Maybe it’s because those who work at the paper live in a filthy rich Snow White neighborhood.

The headquarters of the Los Angeles Times is in El Segundo, almost 12 miles from Los Angeles. The closest homeless shelter is 6.27 miles away. A Google search found that “El Segundo home prices are not only among the most expensive in California, but El Segundo real estate consistently ranks among the most expensive in America.” It is 71.2% white and 3.79% black. Looks like there is enough white guilt there among the white privileged to last a lifetime.

Home » Blaming The Church For The Homeless In L.A. – OpEd