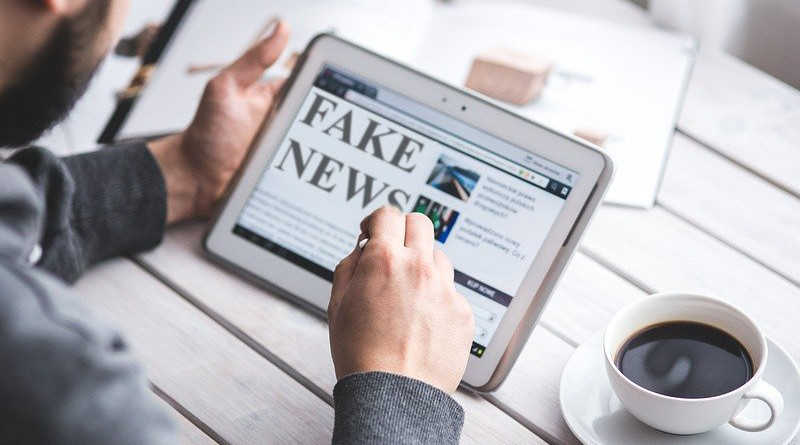 Today, the world is a global village because of the interconnectivity made possible by the internet. At the touch of a button one can connect to the outside world from the remotest location to the biggest cities and metropolis of the world. Much as the internet has made possible connectivity on a global scale, yet the rise of social media has led to increased proliferation of fake news.

Now, the social media is an all-comers affair since there are no clear-cut rules and regulations guiding the use of this most innovative invention of the 21st century.  The social media has turned to a market place of misinformation and mischief where every scoundrel can disseminate hate speech or fake news without any fear of recrimination.   Indeed, some users of this information superhighway have gone beyond the bounds of free speech and decency.

Thus the social media is like loose cannon where anything goes. As it is, everyone is now a citizen journalist, editor and publisher all rolled into one with the right to share and disseminate information to the public. The dissemination of news has become easier as anyone armed with a smartphone or laptop can share various contents, which range from text, videos, photos and audio on various platforms whose reach and power are beyond the range of the traditional media.

To be sure, the power of social media has been amply demonstrated by the viral video captured by a bystander as police officers in Minnesota, USA, took George Floyd into custody. Then one of the officers Derek Chauvin placed his knee on George’s neck until he gave up the ghost. Of course, this had created global outrage and led to worldwide demonstrations against racism and police brutality in the United States of America.

Beyond that, the purveyors of fake news are not bound by any social mores or regulations, unlike the traditional media that are guided by facts and objectivity, which is a ground norm of serious journalism; instead, the harbingers of fake news rely on rumours, gossips and hearsay which is their stock-in-trade. No sooner have they picked up tidbits of news and gossip than they spread it, relaying it as gospel to the unwary. Hence shadowy figures have turned social media to a contagion of fake news and hate speech.

For this reason, the high and mighty, rich and poor, and prince and plebian have fallen victims to the antics of peddlers of fake news. At present, fake news has become a cottage industry. Merchants of fake news can conjure anything out of the air, as it were, and pass it off as news. They have an immense capacity to create something out of nothing. From their febrile imaginations they churn out information that cannot stand up to scrutiny. Without a doubt, their remorseless malignity in spreading fake news has the potential to destabilize the society.

That’s why traditional journalism is regulated by norms, mores and conventions, as well as laws. As they say in journalism, facts are sacred while comments are free. In this regard, the press is guided by the laws of libel while the broadcast industry is whipped into line by the laws of slander. Thus those who step out of line are subjected to the laws of libel and slander. Those laws serve as guardrails for responsible journalism.

By extension, purveyors of hate speech, racism, and religious extremism now deploy the social media to propagate their deadly virus to the world. By their nefarious actions, these flotsam and jetsam of society have turned the media landscape into a veritable global network of misinformation, disinformation and mischief, disrupting the time-tested rules of journalism which are anchored on objectivity, impartiality and truth. Whereas those who traffic in fake news serve the gullible public a cocktail of lies and half-truths.

Therefore, it is not surprising that various governments all over the world have begun to contemplate legislation against fake news in order to curb the excesses of shadowy figures in social media. Although there have been concerns that any such legislation will only serve to curb freedom of speech, which is a fundamental human right. Even so, the technology companies such as Facebook and Twitter are at their wits end on how to combat the spread of this global menace.

Peeved by the pervasiveness of fake news, the first Black Nobel Laureate in Literature, Wole Soyinka has also expressed concern about this cancerous monster and warned that fake news has become a threat to mankind, adding that it may cause a third world war. Soyinka made this declaration as a panelist in BBC News “Countering Fake News’ symposium in Abuja last January. He said, “I’ve said this before that fake news may cause World War 3 and the fake news will be started by a Nigerian.”

The Playwright said it was unfortunate that many false statements have been attributed to him.  Furthermore, he stated that last year he saw his obituary many times on social media causing many people to call his phone.  For Soyinka, fake news should be treated as a crime and the purveyors of fake news should be advertised as criminals and arrested by the police.

Nothing has demonstrated the danger that fake news portends for humanity than the current Covid-19 global pandemic. All manner of disinformation and misinformation have been peddled about the origin of the disease. Some have gone to great lengths to describe it as a ‘plandemic,’ that is, a deliberate plan to push out a virus to the world with the aim of creating a global lockdown, which in turn will usher in the use of 5G networks. Moreover conspiracy theories are peddled with alarming ease and regularity in social media.

Thus the World Health Organisation (WHO) has been in a battle to counter widespread misinformation about the corona virus. Small wonder the United Nations has launched a new initiative to foster behaviour change and counter the growing threat of misinformation online. The campaign, called Pause, asks digital users to take the time to think about what they share before posting it online.

“Misinformation is spreading faster than the virus itself, and is seriously disrupting public health efforts by dangerously distorting sound scientific guidance. It is designed to exploit our emotions and biases at a time of heightened fear,” said UN Secretary-General, Mr. António Guterres.

To this end, a range of media companies around the world are distributing Pause content on TV channels, online and via SMS. Major social media platforms, including Facebook, Twitter, Google (YouTube) and TikTok, have also committed to promoting Pause, while indicating a willingness to scale up their ongoing efforts to suppress the circulation of misinformation, Mr Guterres disclosed.

“Just as social distancing slows the spread of the virus, behaviour changes around sharing will go a long way to slow the spread of misinformation. But it can only be meaningfully halted if there is no place for misinformation on social media platforms,” the UN Chief stated.

Most of all, Bill Gates who is at the centre of the conspiracy theories also blamed social media companies such as Facebook and Twitter for the spread of misinformation about Covid-19 during the pandemic. “Can the social media companies be more helpful on these issues? What creativity do we have? Sadly, the digital tools probably have been a net contributor to spreading what I consider crazy ideas,” Gates said in an interview with Fast Company magazine. The “crazy ideas” include misinformation convincing people to not wear masks, and conspiracy theories about vaccines to combat the disease, Gates said.

Nonetheless, much as the internet has provided a platform for global connectivity, still the toxic effect of fake news on the well-being of the society requires urgent action to curb what has become a clear and present danger to both individual and collective peace.  It is disquieting that the social media that were meant as a force for good, in the hands of some unscrupulous persons, have been virtually weaponized as a force for negativity. Thus technology companies such as Facebook, Twitter, WhatsApp, and Instagram should be at the forefront of this battle against fake news. The shadowy figures behind misinformation must be checkmated. On the whole, the social media does more good than harm.

*Kola King is a Nigerian journalist and novelist, and currently the Managing Editor of Nigeria Now, a news magazine based in Abuja, Nigeria. A version of this article appeared in the Public Review newspaper, Freetown, Sierra Leone