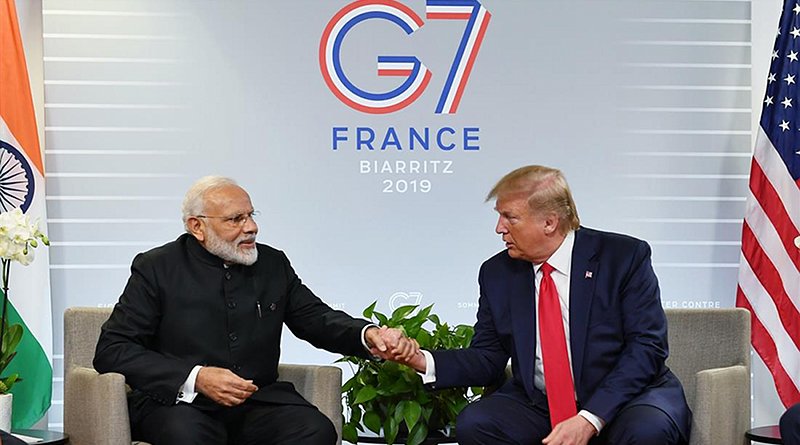 Both Prime Minister Narendra Modi and US President Donald Trump stuck to an orthodox script, ensuring that their second substantive meeting of 2019 on the sidelines of the G7 Summit at Biarritz, France was not wasted.

For his part, Modi, in a polite yet firm statement at a joint appearance with Trump just before their bilateral discussion on Monday, 26 August, laid out India’s position on Kashmir, leaving no room for any mediatory excursion.

Trump, meanwhile, said that he was confident that “they can do it themselves, they’ve been doing it for a long time.” Asked pointedly whether the offer to mediate was still on the table, all he had to say was “I’m here.”

He also mentioned the previous night’s conversation about Kashmir with Modi: “The prime minister feels he really has it under control; and now, when they speak with Pakistan… I’m sure they will be able to do something probably very good.”

In a tweet later, Modi said that he had had an “excellent meeting” with Trump and that the two had agreed “to address trade issues for mutual benefit soon.”

At the press meet, Trump said that the two sides had been talking about trade, about military and other issues. “We had some great discussions, we were together last night for dinner and I learned a lot about India,” he said.

No Mediation as Long as Kashmir is Under Control

Trump also seemed to try and get over another cloud that had been hanging over his relationship with Modi: A January 2018 report that claimed he had been ‘affecting an Indian accent and imitating Modi’s style of speaking.’

At the Monday press meet, after Modi said in Hindi that the two would discuss the issues and then inform the press about the same, Trump interjected, saying: “He actually speaks very good English… he just doesn’t want to talk.”

The two laughed loudly at this and clasped each other’s hands, as the room erupted with laughter.

As of now, barring some scattered incidents, the situation does seem to be under control, but the reality is that the state remains under a lockdown spanning 22 days.

The security forces’ presence and restrictions remain, communications are fitful, the streets are deserted and people seem unwilling to step out into the streets or send their children to school to signal that things are, indeed, normal.

Modi shares an uneasy relationship with Trump. After an over-the-top meeting in the White House during his first official visit to the US, in June 2017, where the PM embraced a distinctly uneasy Trump, things went downhill. The November 2017 meeting, on the sidelines of the Asean Summit in Manila, went well for all public purposes.

A White House readout talked about the discussions on their comprehensive strategic partnership and commitment to a free and open Indo-Pacific region and the decision to enhance their ties as ‘major defence partners’. Trump even thanked India for buying 10 million barrels of American oil.

But Modi felt that the warmth with which he had been greeted by Trump earlier had gone and he had been treated “like any other Asian leader.”

Nevertheless, Modi gave the US President’s daughter Ivanka a grand reception during her India visit and had traveled to Hyderabad to meet her.

Over the years, the president seems to get worked up only on issues relating to trade, while his officials have been assiduously promoting defence and economic ties with India. Even the Kashmir issue was a bit of a diversion for him.

So, whether by accident or design, there was no meeting between the two through 2018. This was the year that also saw two issues clouding the relationship – that of sanctions relating to Iran and Russia.

While India quietly accepted sanctions against Iran and stopped all oil trade, it has insisted on continuing its weapons acquisition deals with Russia despite the threat of sanctions.

Actually, when Trump has spoken on issues relating to India, they have mostly been on trade. After he publicly called out on the issue, India reduced the tariff on Harley Davidson motorcycles from 75 to 50 percent in February 2018.

However, this did not satisfy Trump, who said the US was getting nothing by the 50 percent decision, adding “They (the Indians) think they’re doing us a favour. That’s not a favour.”

Later in October, he slammed India for its allegedly high tariffs on US products. Announcing the key elements of the new US-Mexico-Canada (USMCA) agreement and the deals that were being negotiated with others, Trump described India as the “tariff king” and said India wanted a trade deal just to keep him happy.

In early June 2019, the US terminated India’s designation as a beneficiary nation under the Generalised System of Preference (GSP) .

So, later that month, India put in place its retaliatory tariffs on some 30 US items. Trump was enraged and publicly demanded that India withdraw the tariffs and said he would take up the issue of India having put “very high tariffs against United States” for many years with Modi, who he was planning to meet on the sidelines of the G20 Summit in Osaka at the end of June.

A little over a week later, on 9 July, he tweeted “India has long had a field day putting tariffs on American products. No longer acceptable!” Later, in August, he said that India and China were no longer developing nations and that they had been “taking advantage” of the tag given to them by the World Trade Organisation.

So, if things remain stable in Kashmir, POTUS will remain silent on the issue. But that cannot be confidently asserted about other issues, especially the one closest to his heart, trade.

This commentary originally appeared in The Quint.