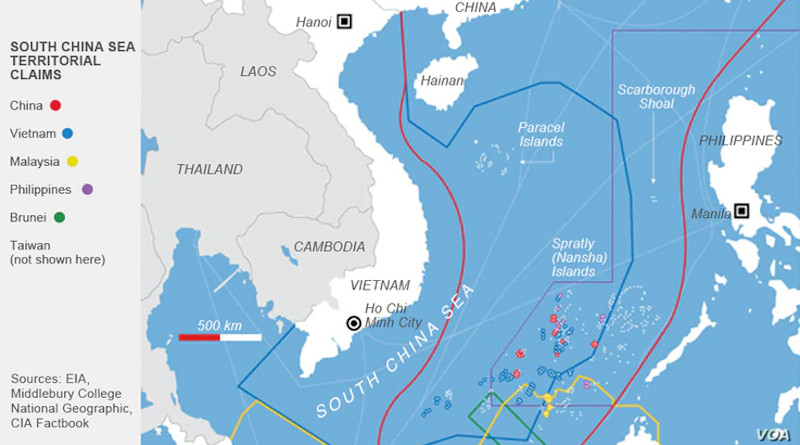 Beijing has fired missiles into the disputed waters of the South China Sea, escalating U.S.-China tensions amid U.S. sanctions aimed at punishing companies that helped bolster China’s continued militarization of the region.

A U.S. defense official told VOA on Thursday the People’s Liberation Army (PLA) launched four medium-range ballistic missiles from mainland China into an area of the South China Sea between Hainan Island and the Paracel Islands.

The missile launches on Wednesday came amid recent Chinese military exercises, which unilaterally closed off large areas of the sea contested by several claimants. Vietnam has protested the exercises.

The official, speaking on condition of anonymity, said the recent Chinese military exercise ”speaks volumes” about how the PLA views areas protected as free for passage under international law.

Navy Capt. John Gay, a spokesman for the U.S. Pacific Fleet, said the United States currently has 38 ships in the Indo-Pacific region and will continue to monitor activities, including the most recent Chinese military exercises.

The Pentagon issued a statement of concern Thursday, saying China’s actions “stand in contrast to its pledge to not militarize the South China Sea and are in contrast to the United States’ vision of a free and open Indo-Pacific region, in which all nations, large and small, are secure in their sovereignty, free from coercion, and able to pursue economic growth consistent with accepted international rules and norms.”

“The PRC [People’s Republic of China] chose to escalate its exercise activities by firing ballistic missiles. We urge all parties to exercise restraint and not undertake military activities that could threaten freedom of navigation and aggravate disputes in the South China Sea,” the Pentagon added.

China has made expansive claims over the South China Sea, basing military weapons and aircraft on artificial islands built atop reefs to bolster its territorial claims, which overlap with the territorial claims of other nations.

The United States frequently conducts freedom of navigation operations in the South China Sea to dispute Beijing’s claims and promote free passage through international waters that carry about half the world’s merchant fleet tonnage, worth trillions of dollars each year.

U.S. Secretary of Defense Mark Esper early Thursday warned  that the world’s “free and open” system forged in the wake of World War II was under attack by what he called China’s ”rule-breaking behavior” in the Indo-Pacific region.

Esper spoke in Hawaii, home to the U.S. Indo-Pacific Command, ahead of travel to Guam and Palau to take part in ceremonies marking the 75th anniversary of the end of World War II.

Esper called the Indo-Pacific region the “epicenter” of great power competition, vowing not to “cede an inch” to countries that threaten international freedoms, in an apparent dig at China.

On Wednesday, the U.S. imposed sanctions on 24 Chinese companies and several people who allegedly participated in building and militarizing disputed artificial islands in the South China Sea. The move is widely viewed as pushback against what the U.S. sees as an intensifying Chinese campaign to dominate the resource-rich sea and bully smaller nations in the region.

The U.S. Commerce Department said in a statement the companies played a “role in helping the Chinese military” with the construction project, while Secretary of State Mike Pompeo said in a separate announcement that Washington was placing visa restrictions on individuals “responsible” or “complicit” in the project.

“Since 2013, the PRC (People’s Republic of China) has used its state-owned enterprises to dredge and reclaim more than 3,000 acres (1,214 hectares) on disputed features in the South China Sea, destabilizing the region, trampling on the sovereign rights of its neighbors, and causing untold environmental devastation,” Pompeo said.